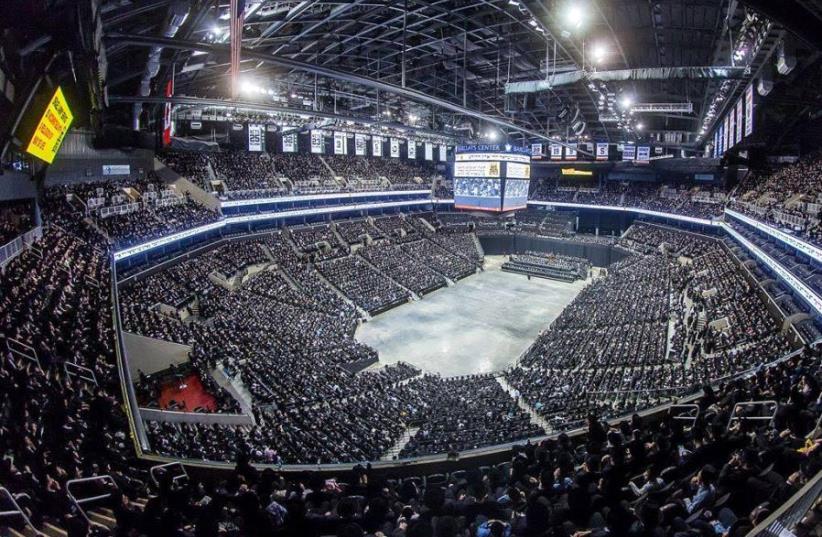 Orthodox anti-draft rally Barclays Center
(photo credit: Courtesy)
Advertisement
NEW YORK – Close to 20,000 Orthodox demonstrators gathered at the Barclays Center in Brooklyn on Sunday to protest against the Israeli law that mandates Orthodox conscription into the IDF, describing it as “Israel’s persecution of religious Jews.”Rabbi David Niederman, a liaison for the Central Rabbinical Congress, one of the groups involved in the event, told The Jerusalem Post he views Orthodox military conscription as a violation of religious freedom.“Since 1948, when the government was founded, they understood that there is such a thing as [yeshiva] students who are studying, and they are exempt of military services,” he said. “But for the past few years, [Israeli politicians] have been trying to tighten the screw and are basically forcefully recruiting and forcefully bringing them in for military service, to which they object.“Unprecedented things happened: There are people who protest those conditions, people who are upset that [Israel] violates their right to their religious adherence.When they go out and speak their minds, they are badly beaten.”The rally was led almost entirely in Yiddish by the anti-Zionist Satmar hassidic group amid unrest in ultra-Orthodox neighborhoods of Jerusalem, where violent protests over the issue have erupted in the past months. Sunday’s rally at the Barclays Center was part of a larger campaign launched a few days earlier titled “Let Our People Go.”Organizers have been touring New York City in trucks with large displays promoting their cause. They also sponsored a video advertisement that paints Israeli authorities as cruel and discriminatory and shows Orthodox protesters being beaten and arrested by Israeli police.“We are here, starting this campaign and making sure that the world knows that unfortunately Orthodox Jews are being persecuted because of their religious beliefs,” Niederman said. “This harassment of freedom of religion, freedom of assembly and speech must stop. We demand this from other countries, so we definitely demand it from a country that calls itself the Jewish state.”When asked why Orthodox men who live in Israel shouldn’t serve in the army, Niederman said the draft law is not about manpower.“They don’t need manpower to secure their borders,” he said. “There is a hidden agenda here to try to change what the Jewish community believes in, forcing them to change their religion and culture.”Despite the anti-Zionist nature of the Satmar group and Sunday’s rally, Niederman insisted: “We are not anti-Israel,” “We pray three times a day and we are yearning for the time that we are going to come back to Israel,” he said. “It will be a time of freedom, no fights, and people will be there to worship Hashem. Our message to the government of Israel is that we are here, we will continue to be here, and nobody is going to force us to change.”