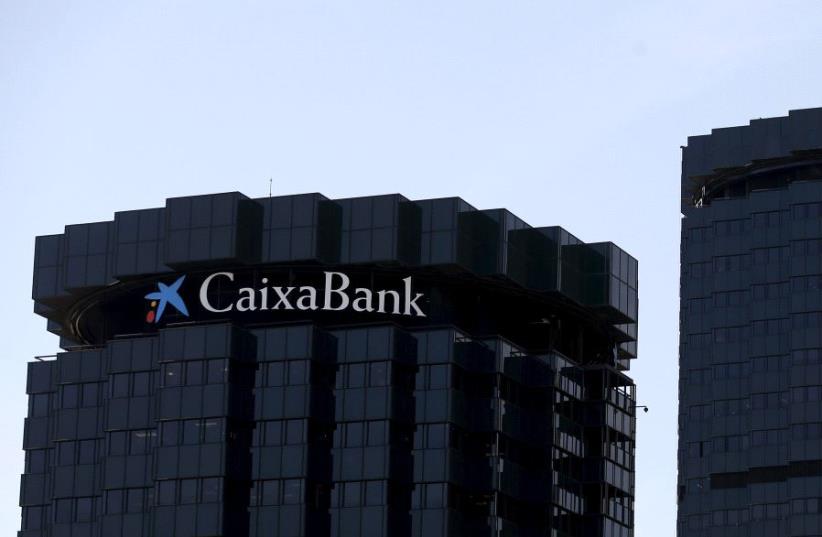 CaixaBank and LaCaixa's logos are seen at the company's headquarters in Barcelona, Spain
(photo credit: REUTERS)
Advertisement
Two giant financial institutions – Dallas-based Comerica and Spain’s La Caixa – are caught in the crossfire of criticism from politicians and human rights organizations over a fiercely anti-Israel legal group’s accounts with them.Texas State Sen. Brandon Creighton told The Jerusalem Post on Thursday, “The International Association of Democratic Lawyers [IADL] supports the Boycott, Divestment and Sanctions movement to boycott Israeli products. I do not agree with that stance and I have authored legislation to prohibit Texas from investing public funds in companies that boycott Israel.”He added, “That [closure of the account] is unfortunately not up to the Texas legislature to decide. As a public official and voice for my constituents, my concern is to ensure that the State of Texas does not support organizations engaged in these discriminatory trade practices.”Texas State Rep. Phil King, the author of another anti-BDS bill, told the Post that “financial institutions and companies, just like state governments, should be encouraged by their stakeholders to exercise their freedom and moral obligation to carefully choose the parties with whom they do business.”Dr. Efraim Zuroff, the head of the Simon Wiesenthal Center’s Israel office, told the Post, “Any steps that limit the ability of organizations which support terror and seek the destruction of the State of Israel are welcome and should be actively encouraged. This is a perfect example of such a step, which we hope will be replicated in the banking and business sectors.”Jan Fermon, the secretary-general of IADL and a Belgium-based lawyer, wrote the Post by email that “regarding BDS, IADL supports this movement.” He added, “IADL engaged in solidarity with the Palestinian people in a very early stage of its existence because it considers the violations of international law and human rights law... by the Israeli authorities as a major obstacle to a just and lasting peace in the region.”Harvard law professor Alan Dershowitz told the Post, “The IADL never met an anti-American or anti-Israel extremist they didn’t support. They have absolutely no credibility among objective lawyers. Their history as a Communist front created and funded by the Soviet Union continues to motivate their biased approach. Their lack of transparency is designed to hide their real agenda, which is ideological, not legal.”When asked about IADL’s funding sources, the NGO’s president Jeanne Mirer wrote in an email to the Post, “Tell him [the Post reporter] we do not use PayPal. They will go after them [PayPal] to cut us off.”Mirer, a Brooklyn-based labor lawyer, wrote in subsequent emails to the Post, “The emails you received from me were only intended for Mr. Fermon,” and, “We do not receive government or UN money.” Mirer declined to further comment on the group’s PayPal account, which is listed as a method of donation on IADL’s website.Fermon said, “IADL is an organization that, unlike many other NGOs, is financially independent from governments or international bodies or institutions. Our main resources are the contributions from our member organizations. All our activities are organized by volunteers. None of our officers receive financial compensation of any kind.”Prof. Gerald Steinberg, the head of the Jerusalem-based NGO Monitor, told the Post, “It is not surprising that this group, which was reportedly created by the Soviet Union during the Cold War, and did anti-American propaganda during the Korean War, is now pushing hard-core anti-Israel propaganda. Among their 17 member organizations is one from North Korea.”He added, “This is consistent with the Soviet campaign on anti-Zionism, mixed with antisemitism, which later fed into the BDS movement. As if often the case with such front organizations, their finances are nontransparent. Unlike legitimate NGOs which publish audited annual financial reports on their websites, IADL provides no information other than the claim that funding is provided by member organizations – most of which also lack transparency.”Fermon said that the criticism and the Post inquiries are attempts “to silence voices that are critical to Israel by demonizing them unjustly as ‘terrorists, antisemites, communist fronts, etc.’”IADL has defended the Islamic Republic’s nuclear program, saying Tehran “wishes to develop its nuclear matter research for peaceful use. Such a use is obviously the right most basic to each country.”Wayne Mielke, a spokesman for Comerica, wrote the Post by email that “we decline further comment.”Josh Criscoe, a PayPal spokesman, told the Post that “PayPal is subject to very strict customer confidentiality rules, so we can’t comment on the status of a specific account.” He added, “Please know that PayPal takes its regulatory and compliance obligations seriously. It is our policy to comply with all applicable laws and regulations. PayPal has dedicated significant resources to combat the use of our secure payment platform for illegal activities and works collaboratively with law enforcement agencies around the world to support both the detection of crime and the conviction of criminals.”A Post press query to La Caixa was not immediately returned. PayPal shut down BDS France’s account last year.