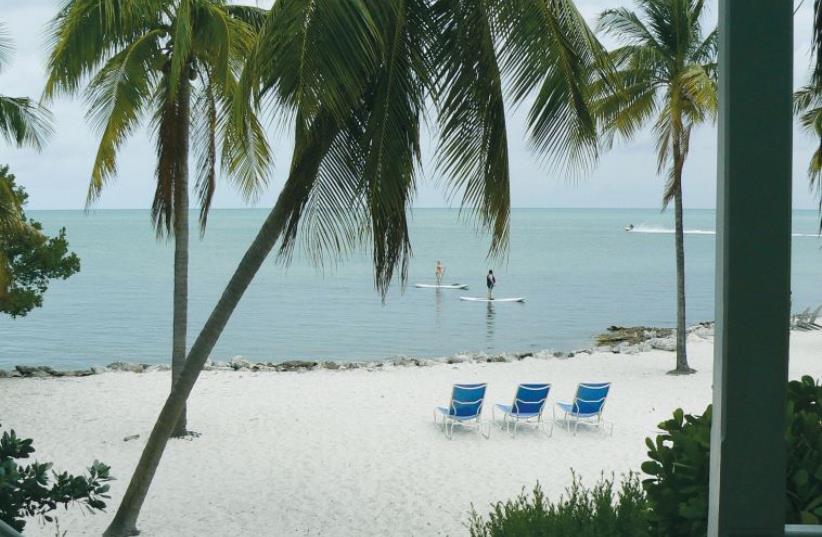 WHAT, ME WORRY? Our back-porch view in the Florida Keys.
(photo credit: LAWRENCE RIFKIN)
Advertisement
Have you heard about the Jewish businessman who was born in Boston, grew up in South Florida, built a fortune and now wants to become the state’s next governor?Chances are good that you have — especially since there are two of them.As Democratic voters begin to cast mail-in ballots and prepare for early voting in August’s primary elections, Jeff Greene and Philip Levine may be each other’s biggest complication. Despite massive financial advantages that have helped them promote their campaigns in ways that others can not, Greene and Levine are pitching platforms and back-stories to voters that are so similar they almost sound like they’re promoting the same candidate.“Both men have extremely similar profiles — politically experienced, successful business owners who are white, male, Jewish and from South Florida,” Brad Coker, CEO of Mason-Dixon Polling & Strategy, noted last week after a poll showed Greene climbing into third place and Levine falling into second behind Gwen Graham. “With this overlapping appeal, the two are drawing a combined 30% of voters — slightly more than Graham.”Greene, a 63-year-old Palm Beach billionaire, entered the race in early June. Once the frontrunner, Levine, who at the age of 56 lists his net worth at $133 million, is now polling alongside or behind Graham.Levine had built an advantage over the field heading into the summer thanks in part to a habit of criss-crossing the state in a luxury tour bus wrapped in campaign logos and an advertising blitz funded by his own money, which he’s used to match his donors’ contributions. But that was before Greene spent $13 million of his own dollars in seven weeks.Now, while Levine’s other opponents are either just getting on television or avoiding South Florida’s expensive TV market altogether, Greene is suddenly sharing air time with Levine in Miami and out-spending him around Florida.Levine, though, is undeterred. After a brief appearance Saturday at his Broward County campaign headquarters, he answered a question about his similarities with Greene by contrasting himself with all his opponents.“The difference between me and the rest of my opponents is I combine both the best of the private sector but also someone who’s tested in the public sector as a two-term mayor,” Levine said, while subtly comparing Greene to Republican Gov. Rick Scott and President Donald Trump. “One thing we do know is we have a governor who went straight from business to politics and a president who’s gone right from business to politics. I think folks want to see someone perform in the public arena — maybe not at the highest level — to see how they do and how they’re able to get things done.”Where Levine is a longtime Democratic donor and Bill Clinton confidant, Greene once ran for Congress in California as a Republican. Greene — who says he’ll use his money to fund other candidates if he’s the Democratic nominee — also ran for the U.S. Senate in Florida as a Democrat in 2010 and lost a primary to Kendrick Meek, but has never held public office.Still, before a behind-schedule Levine arrived in Plantation Saturday morning, his own field staff was talking in the halls of the office about the similarities between the two candidates, the possibility that they are fighting over a similar pool of voters and the chances that all of this benefits Graham.Consider: Both Greene and Levine were born into blue-collar families living near Boston. Both moved to South Florida in their youth. Both are Jewish. Both are heavily invested in real estate. Both tout the appeal of a successful business record. Both say their ability to self-finance insulates them from the sway of special interests.But like Levine, Greene thinks there are some notable differences. Following a speech Saturday evening to the Florida LGBTA Democratic Caucus at a Hilton next to the Palm Beach International Airport, Greene said he brings “a very unique background to the race.“This is a job interview. They [voters] have to look at who’s best to run an $89 billion budget and a $1 trillion economy,” Greene said. “If we were all sitting at a table or walking into an objective hiring board looking at resumes ... I’m not saying Philip isn’t educated. He went to the University of Michigan and I went to Johns Hopkins University. He’s been successful. I’ve been much much more successful.”Greene also dismissed the importance of Levine’s tenure as mayor, arguing that Levine has inflated his accomplishments and over-stated his role in a city government run by an appointed administrator, not the mayor.“They don’t have a school system,” Greene said. “They’re not running the city.”As Greene spoke to a reporter, his wife and children were squeezing into a blue Tesla headed to the airport. He was headed to Orange County for another speaking engagement, the first stop on a statewide tour.On this leg, Greene was flying.But for the rest of the trip, he planned on getting around in a method that Levine would also find familiar: a luxury tour bus wrapped in campaign logos.