The disaffiliations by Newcastle and Lincoln Universities are expected to cost the National Union of Students thousands of dollars in revenues. 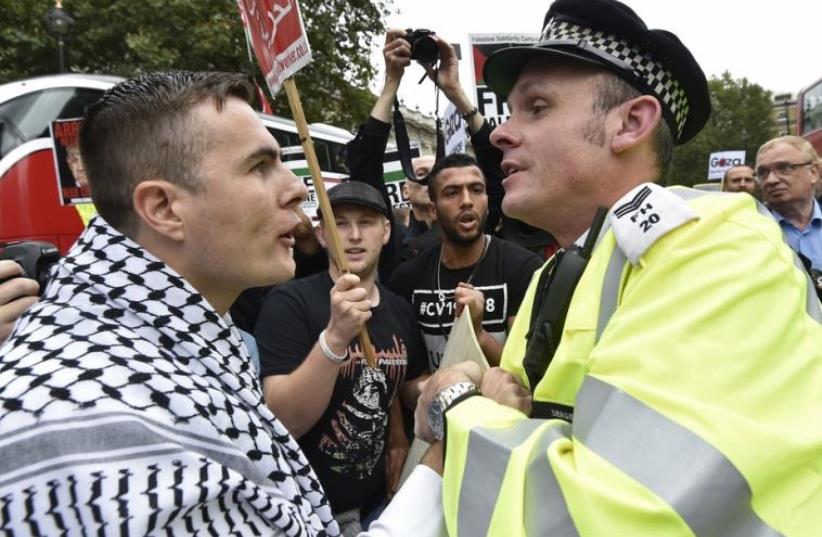 A pro-Palestinian demonstrator argues with police during a protest outside Downing Street in London
(photo credit: REUTERS)
Advertisement
Newcastle University became the second British institution of higher learning that cut its ties with the National Union of Students following the election of a Muslim who supports boycotting Israel and Palestinian resistance to the Jewish state.The decision that disaffiliates Newcastle University from the union passed Thursday by a two-thirds majority of 1,469 voters, which constituted a turnout of only 6 percent, The Chronicle Live news site reported.The vote by the student union of Newcastle University follows another disaffiliation vote earlier this month by Lincoln University from the National Union of Students, or NUS, after the election last month of Malia Bouattia as its president. She has described Birmingham University as a “Zionist outpost,” giving speeches against the “Zionist-led media.” She also said boycotts against Israel should come in addition to “Palestinian resistance” - a phrase widely understood to mean violence. She also opposed a motion condemning the Islamic State terrorist group, claiming doing so would fuel Islamophobia.Neither breakaway student body directly named Bouattia’s anti-Israel rhetoric or alleged support for terrorist actions as a reason for disaffiliating. Newcastle University Student Union President Dominic Fearon said: “It is clear our students feel that the NUS no longer represents their views, does not prioritize correctly and is not effective at achieving change.”The disaffiliations are expected to cost NUS thousands of dollars in revenues.Several student unions of UK universities are preparing to vote on breakaway resolutions amid dissatisfaction over various policies by the NUS and its leaders, including on Israel.The NUS controversy comes on the heels of an investigation into allegations of anti-Semitism at the Oxford University Labour Club. The allegations emerged when the club’s co-president, Alex Chalmers, resigned his post in February after observing that many members of the club and student left-wing activists in general “have some kind of problem with Jews.”In addition to the election of Bouattia, delegates at the NUS convention last month entertained arguments that the Holocaust should not be commemorated separately, but remembered only in the framework of memorials for all genocides. The NUS assembly passed a resolution on commemorating the Holocaust separately but the enthusiastic reception at the convention of arguments against doing so drew rebuke from members of Parliament.Other controversial votes included the banning of clapping at some NUS events and wearing certain types of fancy dress to them.