While anti-Semitic vandalism has risen in Ukraine over 2014, the overall level of anti-Semitic incidents lags far behind western European nations like Belgium and France. 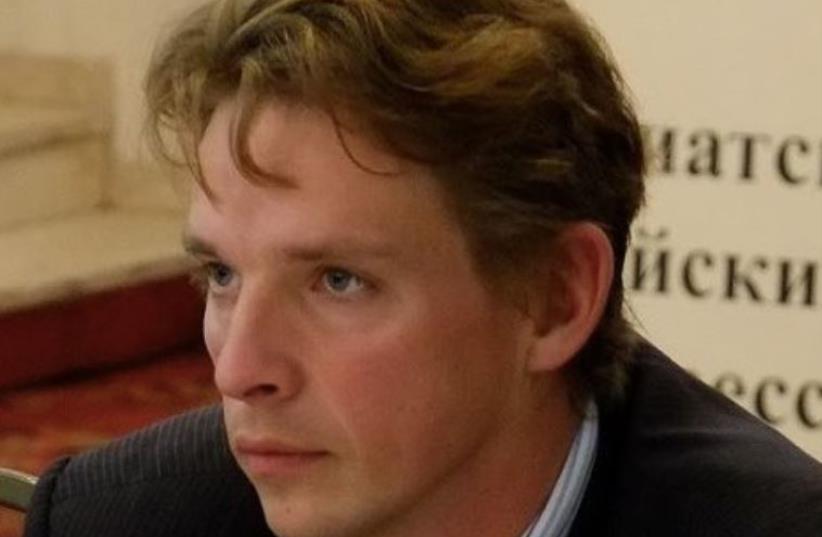 Vyacheslav Likhachev
(photo credit: Courtesy)
Advertisement
Russia has engaged in a protracted propaganda effort to make Ukraine look like a hotbed of anti-Semitic activity, a human rights group in the country’s east alleged recently.In a report on its website, the Kharkiv Human Rights Protection Group accused the Kremlin of what it called “cynical attempts to use or arouse anti-Semitism for political gain” in Ukraine, citing a string of incidents since last year’s Maidan revolution.The latest such incident, which occurred in May, involved the distribution of a counterfeit letter attributed to Rabbi Menachem Margolin, the founder of the Brussels- based European Jewish Association, in which he supposedly implored European Commission President Jean- Claude Juncker to respond to the “outrageous revival of Nazi Germany traditions” in Ukraine.The letter, which Margolin vehemently denied writing, claimed that the EJA had sent an investigatory commission to investigate claims of anti-Semitism and had uncovered “cases of compulsory closures of Jewish organizations and schools, and revocation of licenses from newspapers published in Hebrew and Yiddish.”Beyond that, the letter reported cases of pro-Kiev fighters in the east defacing Jewish monuments and “unlawful calls for forced banishing of Jews” made during protests across the country.While anti-Semitic vandalism has risen in Ukraine over 2014, the overall level of anti-Semitic incidents lags far behind Western European nations, such as Belgium and France.Despite Jewish organizations in Ukraine speaking out against Russian claims, Moscow has continually “opted to spin out more brazen lies and distortion,” the KHPG claimed, intimating that the Kremlin is behind the latest fake.The group cited a recent report by Euro-Asian Jewish Congress researcher Vyacheslav Likhachev into the “latest propaganda offensive” which they traced back to several articles published in leading Russian newspapers last October that painted a picture of a Ukrainian Jewish community terrorized by members of the ultra-nationalist Pravy Sektor (Right Sector) movement.According to Izvestia, Pravy Sektor “declared war” on the community, beating 20 Jews and prompting local leaders to appeal to the World Jewish Congress to “disarm and disband” the group.Both local Jewish organizations and the WJC disputed the reports, which cited a fictitious community leader.At the time, one prominent Odessa Jew asserted that such stories were part of an ongoing propaganda war in which Moscow has tarred the post-revolutionary authorities in Kiev with the brush of fascism and anti-Semitism.Similarly, when the Jewish community detailed its plans for evacuating should the city fall to violence, the Russian media immediately began publishing articles about the supposed impending Jewish mass evacuation.Likhachev also pointed to a recent episode of the popular Vesti news program on Rossiya 24 as evidence of Russian use of anti-Semitism in its propaganda.“New exodus of Jews from Ukraine: Jewish organizations accuse Brussels of hushing up the problem of neo-Nazism in Ukraine,” the program announced, with the presenter stating that anti-Semitic slogans are heard frequently at rallies and citing the ersatz Margolin letter.While immigration to Israel has increased, “Jews are hurrying to leave the zone of military operations and an area occupied by Russia and its accomplices,” Likhachev told stopfake.org in an interview.“The problem of internally displaced persons from occupied territories is well known,” he said. “There is a simple explication that Jews have places they can go to. The State of Israel is ready to accept them. In addition, the situation with the Ukrainian economy has some impact on the number of Jewish emigrants.”Among the experts cited in that television report was former Russian Jewish Congress President Yevgeny Satanovsky, who recently made the news when he said that, given the opportunity, he would personally hang two Ukrainian Jewish leaders.False reports involving Jews are not limited to the Russians, however.In January the Donetsk Jewish community demanded an apology from Ukrainian media outlets after they reported that one of their leaders had been murdered by pro-Russian separatists.According to reports, Yehuda Kellerman, a senior communal leader, was severely beaten by men adorned with symbols identifying them as belonging to the breakaway Donetsk People’s Republic, and subsequently died from his injuries in an ambulance.Like Margolin, European Jewish Congress president Moshe Kantor was also cited as a source in order to bolster the claims, prompting his spokeswoman to issue an emphatic denial.Last April, several masked men posted flyers outside the city’s synagogue demanding that Jews register with the rebel government. The separatists denied any links to the flyer, a claim backed up by the community’s leadership.Rebels leaders recently made use of anti-Semitic rhetoric during a televised press conference, stating that “miserable Jews” run Ukraine.While Ukrainian Jews have denied most reports of resurgent anti-Semitism, some going so far to blame a number of anti-Semitic incidents on Russia, Kiev has also come under criticism for its handling of Jewish issues.The Simon Wiesenthal Center and the US Holocaust Museum both recently censured Kiev over the passing of a bill extending official recognition to a nationalist militia that collaborated with the Germans during World War II and which was involved in the killing of Jews.