By LAHAV HARKOV, SAM SOKOL
Knesset delegation at mandela memorial 370
(photo credit: Courtesy Knesset )
Advertisement
Knesset Speaker Yuli Edelstein proudly led a delegation of five MKs to the memorial service for former South African president Nelson Mandela Tuesday, saying Middle Eastern leaders can learn from the anti-apartheid hero."I hope our region will have leaders like Mandela, who will say no more violence, no more armed battle, it's time for peace," Edelstein told The Jerusalem Post from Johannesburg.The Knesset Speaker described a moving experience, in which leaders from around the world and tens of thousands of locals stood in the rain in Mandela's honor. Edelstein pointed out that many leaders attended despite not being given an active part in the memorial service, just to pay their respects."The people of Israel as represented by the Knesset's diverse delegation remember Mandela as someone who left the path of violence in his righteous battle for the equality for blacks and whites," he stated.On a personal level, Edelstein said he felt a sense of closure in attending the funeral. In 1996, when he was a minister, Edelstein met Mandela, who was president of South Africa at the time. The two discussed their experiences as prisoners of conscience, as Edelstein was a prisoner of Zion in the USSR. 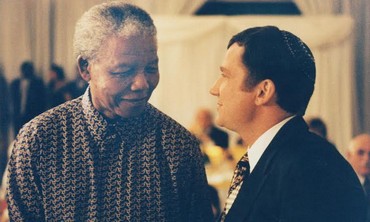 The close calls and awkward situations that came up in selecting the delegation did not stop on Monday, when Prime Minister Binyamin Netanyahu and President Shimon Peres announced they couldn't attend the memorial service and the Knesset delegation did not work out the travel logistics until the last minute.The plane carrying Edelstein and MKs Dov Lipman (Yesh Atid), Nitzan Horowitz (Meretz), Gila Gamliel (Likud Beytenu) and the first female Ethiopian MK, Pnina Tamano-Shata (Yesh Atid) left three hours later than planned and stopped for 25 minutes to refuel in Djibouti. It landed in Johannesburg as the memory service was set to begin, and the group arrived in the FNB Stadium just as the South African national anthem was playing.Then, during the ceremony, the emcee announced the Netanyahu and Peres were there, even though they weren't.Still, Edelstein said that his attendance, as opposed to that of the prime minister or president, is not a diplomatic faux pas even though countries like the US and France sent their top leaders. Many Middle Eastern countries, as well as China and Russia did not send their top leaders, despite having good relations with South Africa.The Knesset Speaker pointed out that 30 of his counterparts from around the world led delegations to the memorial."It's unfortunate that there were ups and downs in the scheduling, but while Israelis are obsessed, South Africans don't care. The Ambassador [Arthur Lenk] said government officials were thankful that the Deputy President and Knesset Speaker came, and Jewish community leaders who sat with us during the ceremony thanked us as well," he said."This isn't World War Three," Edelstein quipped. "We didn't stand out in a bad way."However, South African Ambassador to Israel Sisa Ngombane told Channel 2 News that the delegation to the memorial service "could have been better."Lipman shared his experiences from the memorial, as well, saying he "was touched to see firsthand how this man lifted the spirits and freed a people. I saw it in their eyes, in their singing, and in their body movements. I even felt caught up in the rhythmic singing and swaying."The Israeli delegation was greeted with applause and positive energy by all," Lipman added. "It was a true honor to represent Israel and to be part of a special tribute to a special leader."During the ceremony, South Africa’s Chief Rabbi compared Mandela to Joseph in his eulogy.“So too, Oh Lord, your servant Nelson Mandela, like the biblical Joseph, rose up from jail to become President of a mighty nation; he too transcended his personal pain and years of suffering to forgive and to embrace his brothers and sisters who had inflicted so much pain on him and so many millions of others, in order that our diverse South African family would not be torn apart by hatred and division,” Rabbi Warren Goldstein stated.“Nelson Mandela spoke to our hearts. He brought us comfort. And through his mighty power of forgiveness he sustained us, and liberated our country from the pit of prejudice and injustice, unleashing the awesome generosity of spirit of millions of South Africans.”Calling South Africans a “nation of heroes,” Goldstein called upon the creator to grant consolation to Mandela’s mourners.In the days since Mandela’s passing, the Jewish community of South Africa held a series of memorials in synagogues around the country and the South African Jewish Board of Deputies, a national umbrella group, praised him as the “father of our nation.”“South African Jews were with Mandela as fellow liberation fighters and as lawyers defending him at the Rivonia trial, as visitors during his long and lonely years on Robben Island, and then in assisting in the exciting years of building the new South Africa. And so we mourn his loss together with our fellow South Africans and with all people across the world,” Goldstein said after Mandela’s death.The President, Chairman and Director of the SA Jewish Board off Deputies attended the memorial, a spokeswoman for the group told the Post.The Knesset delegation met with South African Jewish community leaders after the service.Edelstein also met with former US president Jimmy Carter in Johannesburg, with the latter saying he prays for peace between Israel and the Palestinians.The Knesset Speaker Israel is trying very hard and he is glad that, despite the obstacles, peace talks are continuing.Carter also asked Edelstein about progress on the haredi enlistment bill, adding that he know the issue causes a lot of tension in Israeli society.