Open-sea fish infested with parasites use grey reef sharks as back scratchers.

Fish that suffer from annoying, blood-sucking parasites prefer to cooperate with sharks that are much larger than them to serve as back scratchers, according to researchers in Australia and the US National Geographic Society in Washington, DC.

Writing in the journal PLOS under the title “Sharks are the preferred scraping surface for large pelagic [open sea] fishes: Possible implications for parasite removal and fitness in a changing ocean,” Drs. Christopher Thompson and Jessica Meeuwig wrote that bite-sized fish are less likely to take the risk of being eaten by such sharks.

“Mutualistic … interactions can have significant positive impacts on animal fitness and survival. However, behavioral interactions between pelagic animals living in offshore oceanic environments are little studied. Parasites can negatively affect the fitness of their hosts by draining resources and diverting energy from growth, reproduction and other bodily functions,” they wrote.

Such fishes are hosts to a diverse array of parasites, but their environment provides few options for removal. The researchers observed scraping behavior involving several fish species with the aim of removing parasites. Their records spanned three ocean basins and included the first records of scraping interactions involving tunas, blue sharks and mako sharks as well as the first records of scraping within a specific species.

They found that the fish preferred scratching their head, eyes, gill cover, and lateral surfaces – areas where parasites are commonly found and where damage would likely have a substantial impact on fitness. It was easier if sharks did the grooming. Tuna fish preferred scraping mostly on the posterior caudal margins of sharks. 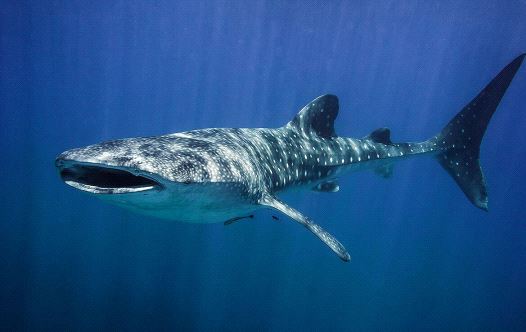 Shark tail fins, also called caudal fins, are unique among all fishes. If you look at the top half of the fin, it is noticeably longer than the bottom half. This asymmetrical profile was common in many ancient fishes, but sharks are the only group to maintain the shape over a period of 350 million years, the researchers said.

The decline of shark populations in the global ocean and the reduction in the average size of many species could limit these interactions, eroding possible fitness benefits associated with this behavior and consequently placing more pressure on already highly targeted and vulnerable species.

Grooming is an important means of parasite removal in mammals and birds with dental combs, tongues, beaks, scratching with limbs and picking with fingers all employed in the task. This raises the question of how fish, with no limbs, fingers or other ability to scratch or pick at their body surface or otherwise reach the site of an infestation can remove their parasites. Monkeys groom each other, while bears rub their backs against trees when they can’t reach certain parts of their body that itch.

They concluded that the abrasive quality of the placoid scales of shark skin provides a surface that when rubbed in a tail-to-head direction is effective in removing parasites, necrotic tissue and other irritants. That these fishes are rubbing against a potential predator suggests that the surface must be particularly suited to the task.