Come to the Table: A sticky situation

What do you do when you don’t like honey cake? You search for a modern variation of the Rosh Hashana classic.

By GAYLE SQUIRES
Honey cake
(photo credit: Gayle Squires)
Advertisement
Like all religious holidays, Rosh Hashana is deeply rooted in tradition. Like all Jewish holidays, it’s deeply rooted in food. As chefs, every year we’re encouraged to create modern and interesting twists on classic recipes. Push too far, though, and the twists and tweaks might no more resemble your Bubbie’s Bubbie’s Bubbie’s shtetl recipes (if you’re Ashkenazi that is) than molecular gastronomy gels, foams, and spheres resemble the foods that inspired them. This year, it’s time to ditch the apple sorbet and revisit an old classic.Honey cake was chosen as the challenge. One of the most symbolic of Rosh Hashana foods, it unfortunately shares an unsavory reputation with yet another holiday classic – the fruit cake. Both are dense, remarkably dry or remarkably soggy, cripplingly spiced, and often brick-like. A few hours of online and cookbook research revealed a handful of modern tricks that claim to salvage the maligned honey cake. Add coffee or tea to darken the loaf. Douse with alcohol to moisten. Cover with chocolate or a glaze for extra flavor. Shower with spices like cinnamon, nutmeg, ginger, cloves, and allspice – often in the same cake – to add complexity. Separate eggs and whip the whites for an airy chiffon-like cake. 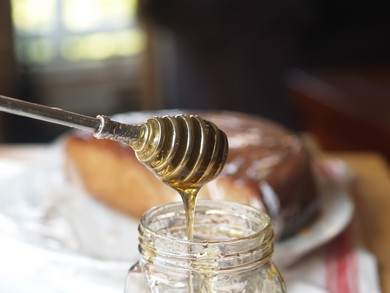 Honey (Gayle Squires)As many of these tweaks feel like unnecessary departures from tradition, it’s possible to reclaim honey cake as it should be – a cake that simply celebrates honey. My self-prescribed challenge guidelines were basic. Clearly the main flavor in the cake should be honey. Any additional ingredients should complement and enhance the honey rather than masking it. No special honey should be required – plain old clover honey from the grocery store should suffice. And a stand mixer should be optional.After a handful of flops – a yogurt cake in which the honey lost out to tang, a simple Italian cake that emerged dry and springy –a base recipe was found that was transformed into a honey cake that dreams are made of.Starting with a cake that uses milk for moisture, soy milk was used for a non-dairy blonde cake with a fine crumb merely tinged with honey.

Click for more JPost High Holy Day featuresFor the next loaf, I doubled the honey and replaced some of the white sugar with brown, yielding a deep golden cake with an intense honey flavor. I upped the cinnamon to a few large pinches and the lemon zest to an entire fruit which brightened the honey’s sweetness. The icing on the cake (literally) was a generous crisscrossing of honey over the batter right before popping the pan in the oven. Out of the oven and wiggled from the pan onto the cooling rack, the cake filled the kitchen with the scent of unadulterated honey. The exterior had caramelized – that honey drizzle had trickled down the edges and bruléed in the heat – and it crackled with the first slice of the knife. The interior was light and moist and rich, pushing back gently against the fork that mere minutes later gathered up the last few sticky crumbs left on the plate. Two days of baking and six cakes later, I emerged from the kitchen triumphant.  Just in time for 5773, here is the honey cake that will win over even the most skeptical of tasters. Honey cake 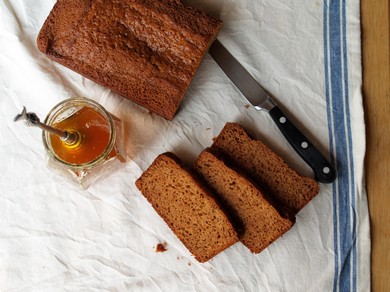 Honey cake (Gayle Squires)This cake was developed  to celebrate honey for a sweet Rosh Hashana. It’s based on a Martha Stewart recipe that was made parve. Soy milk is used, but almond milk should work well. Use plain (not vanilla) milk and don’t go for the non-fat versions. Before you bake the cake, drizzle the batter with extra honey which caramelizes in the oven, helping the cake develop a crispy edge. -    2 eggs-    1/4 C granulated sugar-    1/2 C packed dark-brown sugar-    1/2 cup plain unsweetened soy milk -    1/2 cup vegetable oil, plus more for greasing the pan -    1 cup honey, divided-    1 lemon for zest and juice (1 t zest, 1 T juice)-    2 cups all-purpose flour, plus more for dusting the pan-    3/4 teaspoon baking powder-    1/2 teaspoon baking soda-    1 teaspoon kosher salt-    1 teaspoon ground cinnamon Prep. Preheat oven to 350˚F. Grease and flour a 10-inch springform or two 8X4-inch loaf pans.Mix. In the bowl of a stand mixer, mix eggs and sugars on high speed with the paddle attachment until pale and thick, about three minutes. No mixer? Use a whisk and a little muscle – this will probably take three to five minutes depending on how strong you are. Add the soy milk, oil, 3/4 cup honey (reserve the remaining 1/4 cup for later), lemon zest, and lemon juice and keep mixing until everything is combined.Fold. Sift the flour, baking powder, baking soda, salt, and cinnamon in a separate bowl (I use a fine mesh strainer to get out any lumps), and whisk together to mix. With a spatula, fold the dry ingredients into the wet in two batches until well mixed. Try not to overwork the batter.Fill. Fill the greased and floured pan(s) with the batter. Drizzle the remaining 1/4 cup (4 tablespoons) of honey over the batter, getting most of it around the edges. 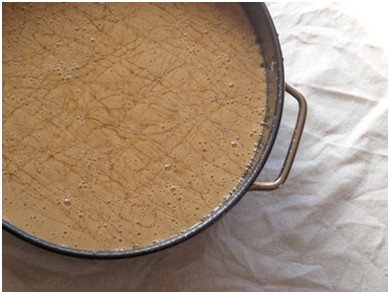 Honey cake batter (Gayle Squires)Bake. Bake the cake - about 50 minutes for a round cake, 40 for two loaf pan (I start checking 5 minutes before time is up) until golden brown and a toothpick inserted into the center comes out clean. The top should be slightly sticky because of the honey. Cool. Let the cake cool in the pan on a wire rack for 15 minutes. Run a knife around the edge of the cake and carefully remove it from the pan. Gayle Squires publishes recipes and photographs on the blog, Kosher Camembert. Her cooking and baking is inspired by international travel .Follow @JPost_Lifestyle