Quick and easy to prepare chicken dishes that are perfect for cold, rainy days.

By GOURMETKOSHERCOOKING.COM
Affogato
(photo credit: GOURMETKOSHERCOOKING.COM)
Advertisement
For us New Yorkers, the winter and our appetite for hearty and warm meals seems never ending. I’ve already exhausted the recipes for slow braised beef and lots of winter soups. Now I’m ready for some quick winter dishes that soothe the body and warm the heart. These chicken dishes are super flavorsome and each have a hint of sweetness that fit the bill. They are also quick and easy to prepare. And I had to include a fantastic winter time dessert, affogato. It's awesome to enjoy while sitting by the fire or watching the snow fall.Maple and Apple Glazed Chicken Serves 6 2 pounds skin-on, bone-in chicken breasts, cut into large chunks Kosher salt 2 tablespoons olive oil 2 apples (1 red, 1 green), cored and cut into wedges 8 medium shallots, quartered lengthwise 1/4 cup fresh sage, torn 1/2 cup chicken broth 1/4 cup maple syrup 1/4 cup apple cider vinegar Pat the chicken dry and season all over with salt. Heat a large heavy skillet over high heat and add the olive oil. When the oil is hot, add the chicken skin-side down and cook, undisturbed, until the skin is browned and crisp, about 5 minutes.Turn the chicken and add the apples, shallots and sage to the skillet. Reduce the heat to medium high and cook until the chicken is browned on the bottom, 4 to 5 minutes. Transfer the chicken to a plate and continue to cook the apples and shallots, stirring, until golden, about 2 more minutes.Meanwhile, make the glaze: Mix the chicken broth, maple syrup, vinegar and 1/2 teaspoon salt in a small bowl. Add the mixture to the skillet with the apples and shallots and boil until reduced by about three-quarters, 2 to 3 minutes. Return the chicken to the skillet, turning to coat, until cooked through, about 2 more minutes.Braised Chicken with Spiced Tomato Serves 8 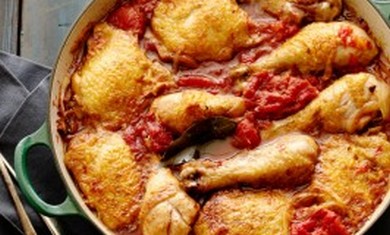 4 tablespoons canola oil 6 chicken thighs 6 chicken legs Kosher salt ¾ cumin 1 teaspoon crushed red pepper (or less if you do not like spicy) 1 large white onion, peeled, halved and thinly sliced 1 inch piece ginger, peeled and grated (about 3 teaspoons) 6 garlic cloves, peeled and halved lengthwise 1 (28-ounce) can whole, peeled tomatoes 2 cinnamon sticks 4 bay leaves Water, as needed Heat the canola oil in a large skillet over high heat. Drizzle the chicken with salt and when the oil is hot, carefully add the chicken to the oil. Do not overcrowd the pan. Resist the temptation to move or turn the pieces. Allow them to brown on their first side, about 3 to 5 minutes. Use tongs to turn the chicken pieces to sear their second side, about 3 to 5 minutes. Transfer the chicken to a tray and set it aside.   In the same skillet, add the cumin and chili flakes, stirring rapidly to give them a quick toast, about 10 to 15 seconds. Add the onions, ginger and garlic and stir to combine. Add some salt, to taste, then add the tomatoes, cinnamon, and bay leaves. Allow the mixture to cook and all the flavors to come together, about 10 minutes. Add the chicken back to the pan, keep the heat low and continue cooking until the chicken is cooked through, 30 to 45 minutes. If the sauce becomes overly thick or begins to stick to the bottom of the skillet, feel free to add some water, about 1/2 cup at a time. Serve with rice.Affogato Serves 1 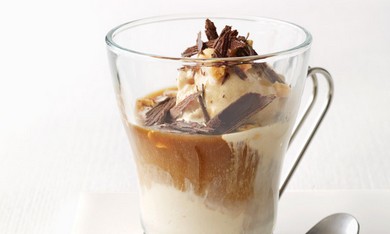 2 scoops ice cream Shot of espresso or coffee (about 3 tablespoons, decaf or regular) Shaved chocolate, cookie crumbs, nuts or any topping Place scoops of ice cream (coffee, chocolate or vanilla) in a coffee cup, then pour in espresso or coffee. Top with shaved dark chocolate and chopped nuts.These recipes were brought to you by www.gourmetkoshercooking.com