Five tasty dishes to warm up on long winter weekends

To make each weekend a celebration look at these five wonderful meat stews that we really love. These dishes require almost no preparation. They just need to “stew” and cook patiently.

The winter rains haven’t started, but the pleasant coolness in the evenings makes you eager to pull out pots and fill them with good ingredients like meat, vegetables and even legumes, which are cooked together and form a whole meal in one pot.

These types of dishes require minimal preparation, yet they need time to cook slowly to develop and intensify the delicious flavors that are hidden in the various ingredients. This is possible when each dish is stewed over several hours.

We have collected five wonderful meat stews that we especially love to start the season. All of them are really easy to prepare. Chop the veggies, sear the meat, soak the rains or beans, and the ingredients will cook slowly as the flavors meld together. B’tay’avon, or bon appetit!

Try this stew, made of chunks of chuck, freekah and dried porcini mushrooms. The meat chunks and mushrooms give it a deep and rich taste that is absorbed by the wheat with a smoky aroma.

This stew is even easier to make than a salad and, if you calculate the duration of the prep without the cooking process, it also requires much less time.

1.Rinse the freekeh or wheat well in a colander under running water and soak for about 20 minutes in a bowl with plenty of water.

2. Heat a wide, flat pot over a medium-high flame, and sear the meat cubes well. No oil is needed because the meat has enough fat, but if it seems necessary  you can add a tablespoon of oil.

3. Drain the wheat and add to the pot with the meat.

4. Coarsely chop the celery stalk and add to the pot along with the mushrooms, garlic, salt and black pepper. Stir. Pour water until it covers the meat, then add a bit more.

5. Bring to a boil, lower the heat and cover.

6. Cook for about three hours or until the meat is tender. Occasionally check the amount of liquid. If it’s completely evaporated, add a little boiling water. When it’s finished cooking, if there’s a lot of liquid left, increase the heat, remove the cover and continue to cook until the liquid is almost gone.

** Dried mushrooms are usually soaked in boiling water, but since the cooking process is long, soaking isn’t necessary.

2 - Only two ingredients yet it’s really rich: a pot of shpondra (asado) and roasted kohlrabi

This is a super simple stew: chunks of shpondra (asado) with kohlrabi, which are cooked slowly in their own juices without adding liquids.The taste of the kohlrabi when cooked for a long time is sweet and savory, and it blends well with the soft and juicy asado. Fresh, tasty kohlrabi can be bought in any produce store. You should really try this easy dish.

2.Put a heavy saucepan, suitable for placing oven use, over medium-high heat. Pour in the olive oil and when hot add the pieces of meat. Cook the pieces until nicely browned on all sides.3. Add the kohlrabi quarters over the seared chunks, place the garlic head in the center and season.4. Close the pot tightly with baking paper and two sheets of aluminum foil for complete sealing. Close with a lid and place in the hot oven for 45 minutes.5. Lower the oven temperature to 160 degrees and continue to roast on low heat for about three hours, until the meat is tender.

3 - More delicious than the original: Hungarian goulash with porcini and dumplings

There is nothing like opening the cooking season with Hungarian goulash. Soft meat cubes and potatoes float in a red sauce with lots of paprika. The secret in this unique pot is the addition of dried porcini mushrooms to a stew that enriches and deepens the taste of this Hungarian casserole even more.

And if you want to pamper your family a little more, add in small dumplings, which will absorb all the flavors. This dish will be a winner that will gather all the members of the house around for a real winter meal.

1. Soak the dried mushrooms in boiling water for about 30 minutes, strain off the liquids and chop. Save the liquids for later.

2. Pour the oil into the pan, add the onion and fry until transparent, about eight minutes.

3. Add the meat cubes and continue to fry for another 10 minutes while stirring until they are well seared.

4. Add the garlic, paprika and shiitake mushrooms and stir for another minute.

5. Pour the mushroom soaking water and cups of boiling water into the pot and bring to a boil. Lower the flame and cook partially covered for about an hour.

6. Meanwhile, peel the tomatoes and cut into cubes, the peppers cut into strips. Add to the pot and season with salt and pepper (if necessary add more boiling water just to the required thickness).

8. Prepare the dumplings: Mix the eggs with the flour, oil  salt and water until blended into a batter.

9. Drop spoonfuls into the pot or pour through holes of a coarse grater. Continue to cook until ready. You can also boil the dumplings separately or coat them in bread crumbs mixed with garlic and salt, then fry.

4 - Challah just waiting for its sauce: a stew in a basket and black-eyed peas

Onion and beans is one of the most well-known and beloved dishes from Tunisian cuisine. One that is just right for dipping the Shabbat challah in its sauce and savoring every bite. A stew full of magic, perhaps precisely because of its simplicity of preparation and ingredients. There’s also a richer version with chunks of chuck which is simmered all night long.

1. Soak the beans for about 8 hours in a bowl with plenty of water. Change water every 2 ½  hrs.

2. Preheat the oven to 100 degrees Celsius. Drain the beans and transfer to a large pot that can fit in the oven.

3. Put the onion and celery in a pot, mix lightly with the beans and place the meat cubes on top.

4. Mix olive oil with the finely chopped tomatoes, salt and pepper and pour over the contents of the pot.

Place cinnamon stick and bay leaf in a pot, pour water only to the height of the meat, cover and put in the oven overnight until the meat and beans are tender, about eight hours. The finished dish will have a consistency that’s between stew and soup. If necessary,  remove the lid, reduce liquids and cook until it has the taste you want. Serve with challah and or other bread to soak up juices. 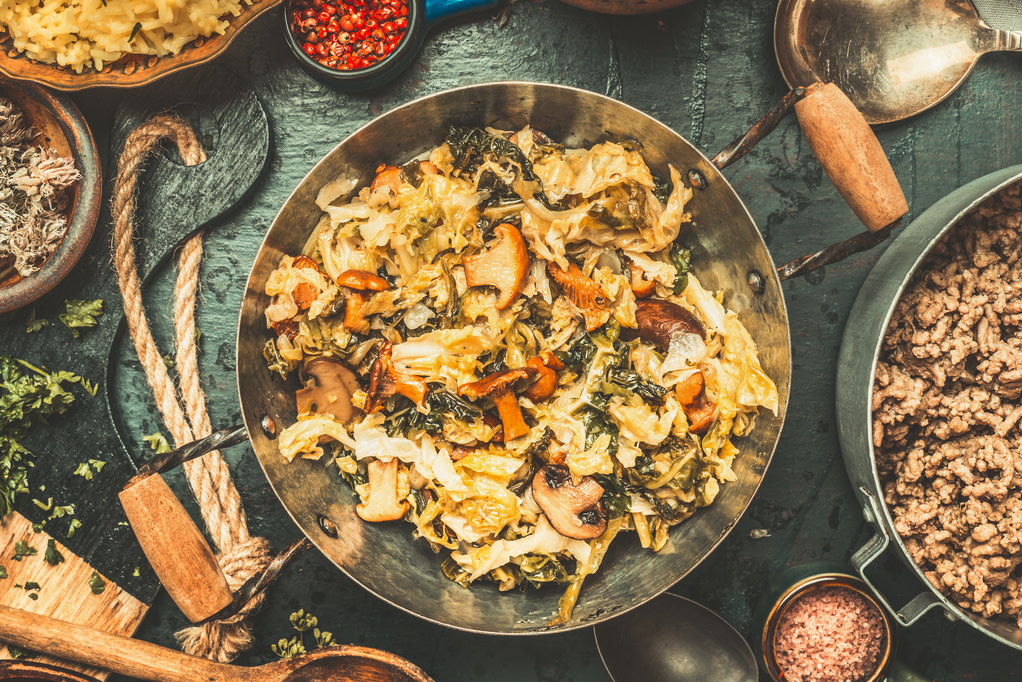 This meat, also known as shoulder roast, is a beautiful, non-greasy cut with a rich flavor that needs long cooking. Cook it thoroughly, then wrap it in a sauce rich in roots, marrow bones and red wine. This recipe makes a festive family meal that’s not labor intensive. It just needs a good few hours on the fire.

1. Brown the bone marrow. Preheat the oven to 200 degrees Celsius, place the bones on a baking sheet and brown well.

2. Meanwhile, pour olive oil into a wide, deep pot that can hold all the veggies. Add the sage and fry a little in the oil until there's a good aroma. Salt and pepper the meat and sear it on all sides until it gets a charred and golden hue.

3. Add the vegetables in order - a process of about 30 minutes: first brown the onion and the halved garlic (with the peel). Add tomatoes and gradually the roots as well. Finally, the green leaves (celery and parsley).

4. After all the vegetables have undergone the frying/glazing process, add the wine and sauté.

5. Add the bones, season with salt and pepper and cover with boiling water.

6. Bring the pot to a boil, turn to a low heat, cover and cook on the verge of boiling for 3.5 hours. Remove the lid and continue to cook over medium heat for another 30 minutes. Serve in the center of the table.

This casserole can also be prepared two days in advance and reheated before serving.