Towel left in woman for four months after C-section

The woman claims she wasn't examined properly after complaining for months. Only on her fourth visit the towel in her stomach was discovered. 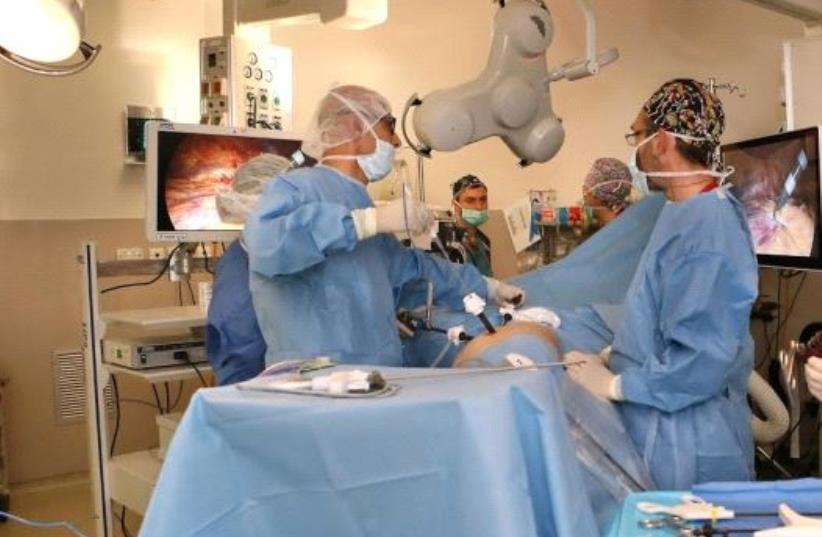 A towel was discovered in the stomach of a 25-year-old woman (S.) living in the north of Israel after she had suffered from stomach aches for months - now she claims that the hospital didn't treat her properly.

At the beginning of August S., pregnant with twins, arrived at the Holy Family Hospital in Nazareth to undergo a C-section. The operation went well, but immediately after she began to feel strong pains. In spite of this, she was sent home after four days with the hospitalization summary stating: "In good overall condition, no complaints."

On the same day she was sent home, S. returned to the hospital suffering from a high fever and stomach pains. In spite of her complaints and some abnormal vital signs, she was sent home once again without treatment.

The summary of this second visit again states "Complained about chest pain, no other complaints."

CT scan only on the fourth visit

Two months after, S. returned to the hospital, again complaining about severe stomach aches and discharge from the wound left from the C-section.

This time she was sent for an ultrasound - but in the end, the only treatment she received was the draining of the wound. No holistic exam was made to discover the source of her returning stomach problems.

Two more months passed until four months after the birth, S. turned to the hospital a fourth time. She was finally sent for a CT scan after which she was immediately rushed to the operating room when a big foreign object was detected in her stomach, next to the uterus.

The half-meter-long towel was finally removed from her stomach after being there for four months.

A preliminary investigation of the incident showed that no member of the operating team noticed a missing towel and the counting sheet, which has to be filled out at the end of every operation, showed nothing important missing as well.

An instruction from the Director General of the Ministry of Health from 2011 defines unintentionally leaving a foreign object inside a body during an operation as a "can't happen"-type of incident. This strengthens the woman's case to sue the hospital and presents the incident as obvious medical negligence.

"In good overall condition, no complaints."

S. intends to file her lawsuit with the help of lawyer Iyad Matnas, an expert for damage claims and will demand compensation in the amount of NIS 2 million.

The suit will include sections covering her great difficulty in dealing with her two older children and her two babies while suffering for months. It will also claim compensation for lost payment from her employer as she missed a number of working days, as well as compensation for the mental stress she suffered during her prolonged ordeal.

Matnas added that S. is still suffering from anxiety, fearing that pieces of the towel still remain in her body.

The hospital has not commented on the claims.