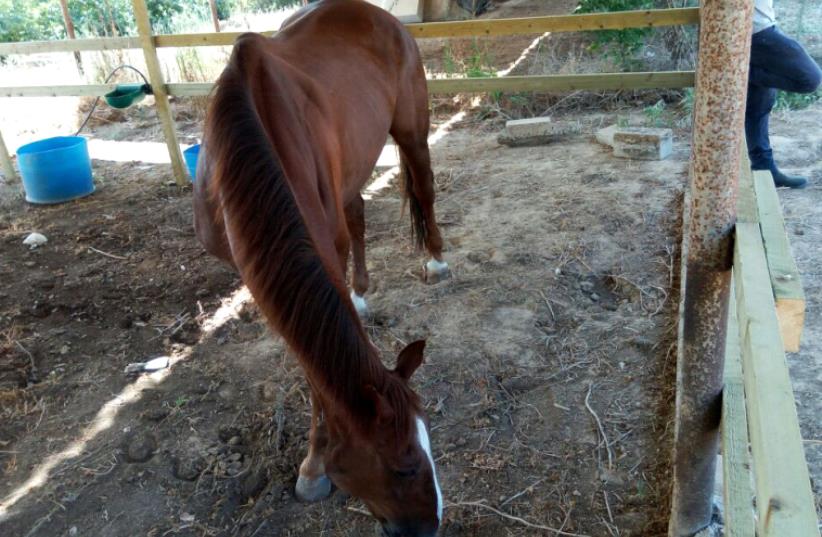 Special operation brings battered horse home to Israel from Gaza
(photo credit: AGRICULTURE MINISTRY)
Advertisement
The equine-version of the coronavirus (ECoV) is becoming a growing threat for horses in Israel, a new study by Israeli researchers has found, based on a sample of seroprevalence, the amount of pathogen in a population, as measured in blood serum.
In the study, which was published in the academic journal Animals, some 58.6% of horses in central Israel were found to be positive with ECoV, while 41 horses (12.3%) also were found to be with anti-ECoV antibodies.
The study comes as ECoV outbreaks in horses have been reported in the United States, European Union and Japan, in addition to sporadic cases in the United Kingdom and Saudi Arabia.
More significantly, equine coronavirus (ECoV)  is a β-coronavirus that is both pathogenic to humans as well as animals, with traits akin to the current coronavirus (COVID-19) in humans, which was believed to have originated from bats in China. Similar to other β-coronaviruses, ECoV is also considered to have came from bats, which may have possibly descended from BCoV or a rat coronavirus
The growing trend of EcoV infection in Israeli horses, the study notes, was likely due to their importation and exportation to and from Israel.
Despite the fact that ECov is more self-limiting in its spread, the virus may also cause severe complications in some animals, while like the current coronavirus, asymptomatic carriers can spread the virus to other animals.
ECoV is among a group of diarrheic pathogen in foals that causes enteritis, an inflammation of the small intestine.
Sign up for the Health & Wellness newsletter >>