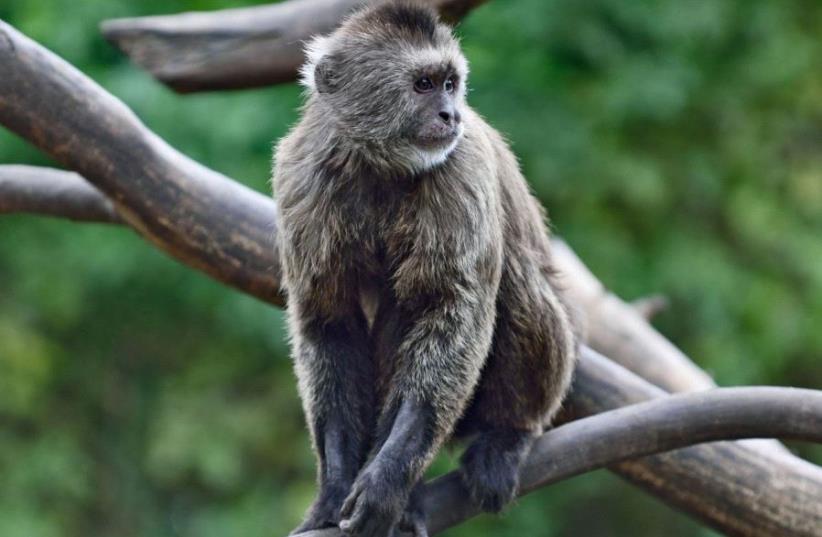 Conner the monkey
(photo credit: RAMAT GAN SAFARI)
Advertisement
Human cells have been integrated into animal embryonic tissue by a team of scientists in California, leading to an important development in studies concerned with prolonging human life.A team of researchers led by Professor Juan Carlos Izpisua Belmonte of the Salk Institute for Biological Studies, have demonstrated the ability to integrate human cells into animal tissue, and hope that this new development will allow them to understand a variety of human diseases as-well as address the worrying shortage of donor organs across the world.
The study, Chimeric contribution of human extended pluripotent stem cells to monkey embryos was published in the science journal Cell.
Chimeric organisms are organisms that contain cells from two or more species, and could be useful for "advancing biomedical research not just at the very earliest stage of life, but also the latest" said Izpisau Belmonte in a statement about his research.
Using technology published in 2020 by Professor Weizhi Ji of Kunming University of Science and Technology in Yunnan, China, the research team tagged human pluripotent stem cells and inserted them into macaque embryos in petri dishes. Each experiment was examined for 19 days before termination, and scientists observed that the human stem cells survived and integrated into the embryos with relative efficiency.
Under the leadership of Izpisau Belmonte, a similar experiment was conducted in 2017 during which human cells were incorporated into early stage pig tissue. Whilst the research was groundbreaking at the time, the contribution of human cells was relatively low, which scientists attributed to the 90 million year evolutionary distance between the two species.
The macaque, with a 30 million year evolutionary distance, is more closely related to the modern human and so Izpisau Belmonte turned his team's attention there, hoping to further improve the chimera formation through the old world monkey species.
Although the chimeras developed with the macaque embryos will not be useable for human organ transplants, they will be able to reveal invaluable information regarding the development and integration of human cells, and how the cells of various different species interact and communicate with one another.
Izpisau Belmonte compared the process of cell integration to people communicating in different languages, saying that the integration of human cells to pig skin was like two people trying to communicate in Chinese and French, whereas the human cells in the macaque embryo were able to communicate like people speaking Spanish and French. This breakthrough development will help researchers gain a clearer understanding of molecular pathways, allowing for them to continue to improve the integration of human cells into more suitable hosts.
Once scientists have developed a clearer understanding of molecular communication, chimeric organisms could allow unprecedented research into the earliest stages of human development and cell regeneration. In addition, they could allow invaluable research into the development and progression of a variety of diseases, allowing for more effective treatments and cures to be developed.
Another avenue into which researchers hope to gain insight is the aging process. As of now there is no conclusive information on the rate at which different organs age, or how the aging of one organ can impact the other, and Izpisau Belmonte hopes to change this. Chimerism could allow researchers to grow the organ of an animal with a short life span in a much longer lived species in order to observe the rate at which the organ ages, and the way it affects the rest of the organs in the animal.
Despite Izpisau Belmonte's position as a leading expert in the field of chimera research, the study released by the Salk Institute was met with backlash by those worried about both the ethical implications of the experiment, and the data produced by the study.

Reprehensible. The Salk institute should not be involved in this research. A viable embryo steps over the ethical line in human dna research.
The institute should conduct itself better than this.
— Ron Ruble (@ronruble5) April 15, 2021

Dr Alfonso Martinez Arias, an affiliated lecturer in the department of genetics at the University of Cambridge, expressed his doubt saying “I do not think that the conclusions are backed up by solid data. The results, in so far as they can be interpreted, show that these chimeras do not work and that all experimental animals are very sick."
Martinez Arias cited other studies that have taken place in the past using human embryonic stem cells rather than chimeras, calling them more ethical and suggesting that in the future these methods should be used to further research instead.