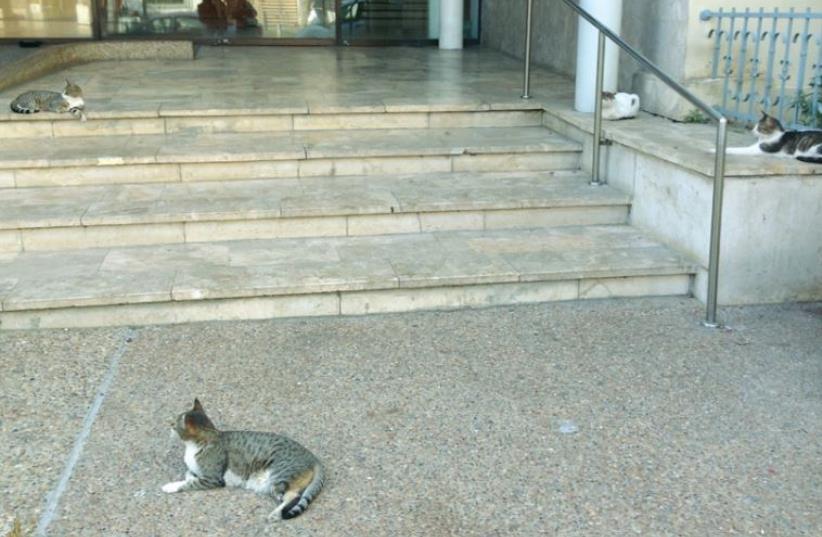 Jerusalem street cats: A dubious future, but hopefully fewer cans
(photo credit: ERICA SCHACHNE)
Advertisement
Wanted!Thought Jerusalem only appears in the news in the event of riots or terrorism in its streets? Think again. According to the Israeli Building Center, a recent survey has put the capital on top of the list of cities across the country most wanted by potential buyers. The findings of the survey – held each year around December – has shown that at the end of 2014, Jerusalem was most sought after by both buyers and investors.During the first six months of 2015. according to Central Bureau of Statistics figures, no fewer than 1,385 new apartments were sold – compared to only 884 in Tel Aviv during the same period. Closing the list of the 20 surveyed cities was Ra’anana, with only 243 apartments sold between this past January and June. The survey didn’t reveal whether the apartments sold in Jerusalem were small and affordable or luxurious housing for wealthy Jews from abroad.
Read More...
Cats of JerusalemWhile it is not clear yet what the fate of the capital’s cats will be – earlier this week, Agriculture Minister Uri Ariel announced that the only solution for the increasing number of street cats is to transfer them to a foreign country (since according to Jewish law it is forbidden to castrate them) – felines had some good news out of Copenhagen. Two young students, twin sisters Ofri and Geffen Inbar, sixth graders at the Yehuda Halevi School, have won first prize (for ages 11-14) in an international competition for young environmental reporters of the Foundation for Environmental Education, which has a branch in the city. The sisters presented a video report on street cats whose mouths get stuck in cans and “as a result, cannot eat and die of starvation; or since they can’t see because of the cans on their faces, can’t avoid cars and get run over.” The report is designed to educate and raise awareness among youth as to these cases, in order to prevent such cans from reaching outside garbage receptacles outside (instead of recycling them separately).
In the zone The Museum on the Seam has new exhibition, “Unprotected Zone,” opening on Thursday, November 12. The exhibition dialogues with the immediate surroundings of the museum – located on the seam between the eastern and western parts of the city, close to the pre-1967 checkpoint and border. As a reaction to what Jerusalem has gone through these past weeks, the museum and the exhibition bring the artistic and social point of view, reflecting and echoing daily reality. One of the aspects that it’s tackling is how much individuals can change or influence the reality around them, and what is the moral position of passersby when they become witnesses to the surrounding violence.Opening hours: Monday, Wednesday, Thursday: 10 a.m.-5 p.m., Tuesday: 4-9 p.m., Friday: 10 a.m.-2 p.m.; museum-www.mots.org.il
Colors talk Good news for the residents of Malha and Gonenim – as of this month, parking tags are to be available to ease their parking experience on evenings when large games are held at the arena or Teddy Stadium. Residents of these two neighborhoods have much to tell about the frustration they experience when games are held at one of these nearby venues and they simply cannot find a parking spot close to their home. The new tags, in pink (Gonenim) and blue (Malha), enable the holders to avoid being caught in the traffic – policemen won’t stop them, and they are to be permitted to use bypass roads to safely reach parking spots.
Entertainment by applicationA new smartphone application will enable users to get all the details about where to go in the city center for a nice evening at a bar. “Jerusalem Night Guide” – the name of the project and the application – is linked to a number of bars in late-1950s American style: noting cozy atmosphere, good music and a very long list of cocktails served. The project aims to be a practical, friendly guide, with additional services. For example, if a friend is the designated driver and therefore does not drink alcohol that evening, participating bars will treat him or her to several non-alcoholic beverages. Or remember the early bird special in the old country? Well it seems that through the project, the birds have made aliya – with an up to 50 percent discount on the menus.If you’re planning a long evening of entertainment that includes hopping from one place to another, keep the tickets; thanks to the application, you will now get discounts at the second or third venue. Deputy Mayor Ofer Berkowitz, who initiated the project, says that the new application will provide residents as well as tourists with a high quality of entertainment. In addition, it will contribute to the awakening of the city center – even in these not-so-easy days.Check out the LLM Night Guide on Google Play or the App Store.
Green garage Ever thought about the consequences of the gallons of fuel and other unfriendly liquids that flow from your garage into the soil and sewage system? Well, no more – thanks to an initiative by the Jerusalem Municipality that aims to provide alternative solutions to get rid of this harmful waste. A first step will be a pilot project involving 60 city garage owners, who accepted the mayor’s invitation to participate in an inaugural meeting and to take part in the project.Through the Dry Garage project, fuel and gasoline waste will no longer be flushed into the municipal sewage system, but collected in vast tanks and taken to a special center that deals with poisonous liquid waste.