Who invented the beloved doughnut?

A quick study on the origin of the sufgania. 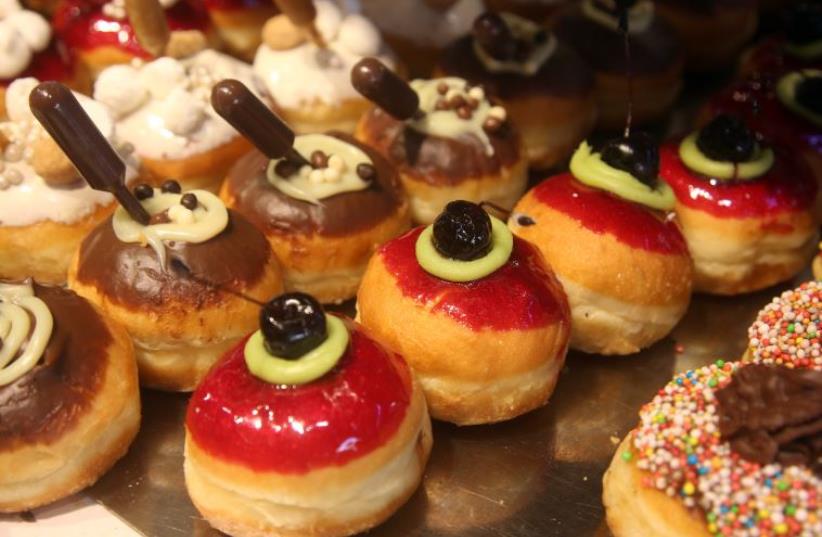 Sufganiot (Hanukka donuts)
(photo credit: MARC ISRAEL SELLEM/THE JERUSALEM POST)
Advertisement
If you look it up in Wikipedia, you may get the impression that it was either the Dutch settlers in early New York or a guy name Hanson Gregory (1847) who invented the doughnut. However, doughnuts – or pieces of dough fried in oil (even those with holes in them) – predated Dutch olykoeks by many thousands of years.Archaeological remains at many of the Pharaohs’ tombs depict the different types of bread made in ancient Egypt, which included ring-shaped bread. To keep breads out of reach of pests and rodents, they were ring shaped and threaded on a pole or stick, which was hung far above floor level. It was this ubiquitous bread “staff” which is the origin of the term “staff of life.”We know for a fact that in biblical times, even as far back as the Exodus, breads or pieces (even rings) of dough were being fried in oil. Tomes have been written documenting such breads. For example, in the Talmud an entire tractate (Menahot) is dedicated to the subject, and describes in great detail the various bread offerings which were fried in oil as part of the ritual service in the Tabernacle and subsequent Temples. One such bread, termed marheshet, had a soft consistency and was fried in a deep pan in oil. This is very reminiscent of the modern doughnut or Israeli “sufgania” (a name coined by Prof. David Yellin, the famous Israeli linguist), excepting for the fact that the marheshet was neither sweet nor leavened. Yeast/sourdough and honey/sugar were not commonly found in the Israelite ritual breads, but were almost certainly used in private homes in ancient Israel. Reference is made in the Talmud to a type of fried dough called sufganin (probably the source of Yellin’s inspiration), which originates from the Greek word sfognus, meaning “to soak up”. These sufganin were either sweetened during the kneading of the dough, or after frying by spreading honey over them.It would be nice to say that we Jews invented the doughnut, but this is not entirely true. Many nations around the world have some variation of dough fried in oil, and are testimony to the fact that when faced with the same ingredients, disparate cultures will develop similar types of food, unbeknownst to one another. So it is difficult to say whether the Dutch olykoeks were a separate innovation, or were influenced by ancient Roman European expansion. Who is to say where the Romans first saw fried dough? Was it in ancient Judea with the sufganin? Or was it perhaps a similar food from ancient Egypt?If you tell a Moroccan that the Dutch or the Americans invented the doughnut, he will laugh at you, because North Africans in the Maghreb have been eating a similar food called sfenj long before Columbus discovered America and long before there were Dutch settlers.While the ancient origins of the doughnut cannot be pinpointed to one place and one time, today they have all converged, as if in a funnel, to one focal point – and that is the modern American doughnut or Israeli sufgania. To the ignorant, these two may be interchangeable, but any self-respecting American will tell you that there is no resemblance between an American jelly doughnut and an Israeli sufgania (although they are prepared in a similar manner). In America the doughnut has become daily fare and the staple diet of police officers. Thankfully, here in Israel, we limit our intake of this highly caloric food to one week in the year (actually, more recently, vendors have started plying sufganiot from the day that the festival of Sukkot ends until the festival of Hanukkah – not an encouraging development for those trying to keep slim).During the eight days of Hanukkah, we binge, which dietitians will tell you is OK, as long it is only one week in the year. We supposedly do it to remember the miracle of the single oil lamp that burned for eight days in the Temple, but if you delve deeper into the ritual breads used in the Temple, the commentators say that the more oil content a bread had, the higher its level of spirituality. So eating doughnuts on Hanukkah is not only about the eight-branched candelabra, but also about trying to be more holy (not holey).Happy Hanukkah.

The writer, a master baker originally from Johannesburg, is CEO of the Saidel Artisan Baking Institute (www.saidels.com), which specializes in training and education in the field of organic, healthy, artisan baking and the inventor of Rambam Bread. He also lectures and works as a consultant in the fields of cereal chemistry, health, nutrition and authentic Jewish bread.