When does the world accept 1938 Munich analogies? - analysis

British Defense Secretary Ben Wallace compared today's global events to Munich, 1938, and when Netanyahu did the same, he was severely criticized. 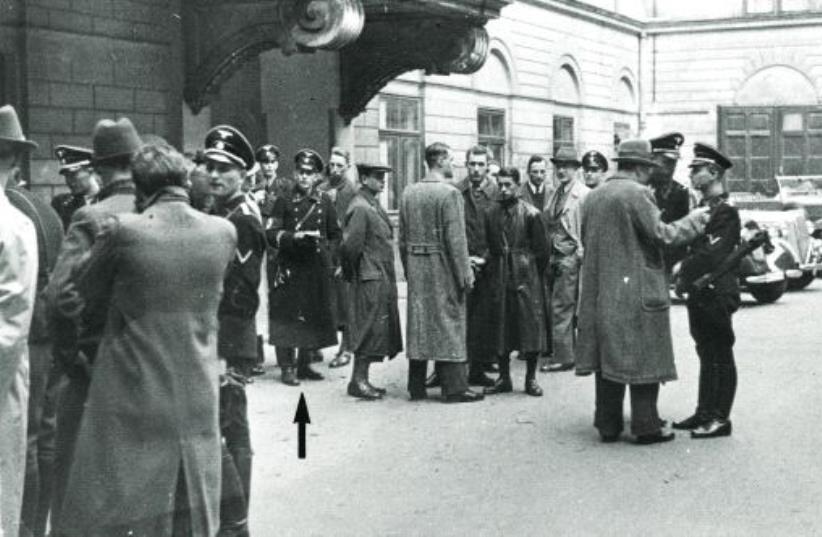 Police and SS, including Adolf Eichmann (see arrow), gather in a courtyard before the start of the round-up of the Jewish community in Vienna on March 18, 1938
(photo credit: DOCUMENTATION CENTER OF AUSTRIAN RESISTANCE)
Advertisement

On Sunday, Wallace did something that former prime minister Netanyahu often did – drew an analogy between global events today and the appeasement of a dictator at the Munich Conference in 1938 on the eve of World War II and the Holocaust.

When Netanyahu drew these analogies innumerable times in reference to the Western efforts to reach a nuclear deal with Iran, he was pilloried.

How dare he make these types of comparisons, Netanyahu’s critics intoned. The Iranians are not Nazis. Former US president Barack Obama, who negotiated the 2015 Iranian nuclear deal, was no Neville Chamberlain who came back from the Munich Conference – where the British and French agreed to the German annexation of the Sudetenland – boasting about “peace for our time.” And Iranian Supreme Leader Ayatollah Ali Khamanei is no Hitler.

Wallace, on the other hand, was less severely taken to task for making comparisons on Sunday between the Munich Conference and the West’s response to Russia’s massing troops on the Ukrainian border.

Wallace, reflecting Western intelligence estimates, told the Sunday Times that Russian President Vladimir Putin could send the troops he built up on the Ukrainian border into the country any day now, and hinted that the West’s response has not been strong enough.

“It may be that he [Putin] just switches off his tanks and we all go home but there is a whiff of Munich in the air from some in the West,” he said.

The Nazis invaded Poland, and World War II began a year after the Munich Agreement.

When Netanyahu said that the world’s willingness to reach a deal with the Iranians that would not strip it of all paths to a future nuclear weapon was akin to the appeasement seen at Munich, various pundits slammed him.

“For Netanyahu and his American allies, it’s always 1938, because if it’s not 1938 and your opponents aren’t Neville Chamberlain, then you’re not Winston Churchill. And if you’re not Churchill, you’ve got no compelling rationale for wielding power,” columnist Peter Beinart wrote on the Daily Beast website in 2013.

And that same year, the late Haaretz columnist Carlo Strenger wrote, “Quite unfortunately, Netanyahu’s worldview is fixated on the equation that 2013 (like all the years before that) were 1938; that Iran is Nazi Germany and that those willing to engage with Iran diplomatically are like Chamberlain in 1938 Munich. It does not allow him to see a number of vast differences.”

But when Wallace invoked Munich on Sunday, the reactions were more muted. The world, it seems, has more tolerance for painting Putin as Hitler than it does likening Khamenei to him. To draw analogies between the soft Western response to Iran’s steady nuclear march is fear-mongering and saber-rattling. But to use those same analogies now with regard to Putin and Ukraine goes without the same degree of opposition.

What this shows is the degree to which Iran – despite its rhetoric and its long track record of malevolent actions in the region and beyond – does not frighten the world to the same degree that Putin and Russia do. Putin’s massing of troops on the Ukrainian border is taken seriously, whereas Khamanei’s massing of a stockpile of enriched uranium is seen more forgivingly. It all comes down to whose ox is in line for a goring.

The Europeans and the West take Russian maneuvers on the Ukraine border deadly in earnest because it may affect them directly – Kyiv is near the heart of Europe. They may look more charitably at Iran, however, both because it is further afield, and because the Islamic Republic’s missiles do not have the names of European countries written on them, as they do Israel’s name.

Israel is watching the situation in Ukraine very carefully, both because of the impact events there could have on world peace and security, but also because of an impact it could have on the ongoing talks with the Iranians in Vienna.

Even as US President Joe Biden is readying for a possible Russian invasion of Ukraine, an action that could trigger a much wider war, he also has to have his eyes on the ongoing talks with the Iranians in Vienna.

For Israel, the talks in Vienna coming to their conclusion just as the Ukrainian crisis is coming to a head is problematic. The US administration may not have the bandwidth to deal with these two major crises simultaneously. Biden has made clear in recent days that his top priority right now is Putin and Ukraine.