American respondents detail their disapproval of the political party that opposes their own, as well as general disillusionment with the two-party system. 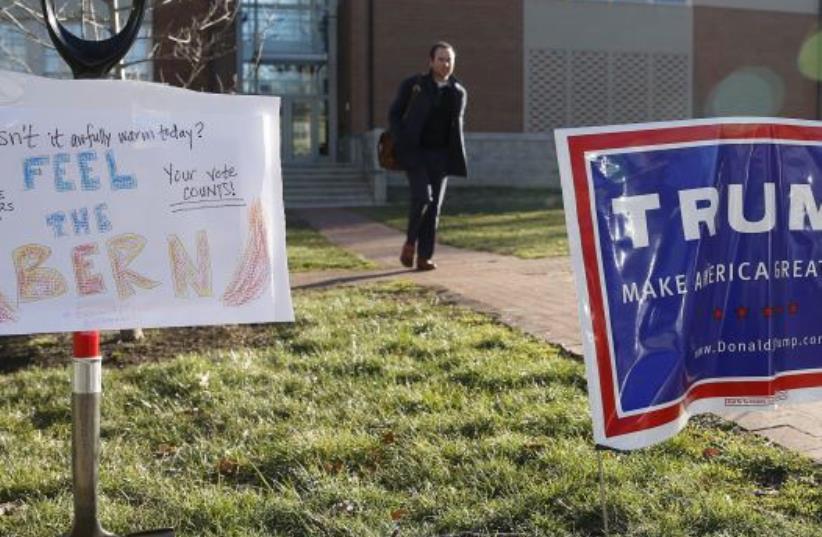 A Virginia voter is framed by a sign in support of Bernie Sanders (L) and a Donald Trump campaign sign (R) after casting his ballot in Arlington, Virginia.
(photo credit: REUTERS/GARY CAMERON)
Advertisement

As the 2022 US midterm election draws nearer, a new Pew survey found that political polarization and disillusionment is on the rise. Left- and right-wing loyalists describe strong feelings of opposition toward members of the opposite political party, while more moderate voters have grown cynical of the two-party system as a whole.

The latest Pew survey found that 62% of Republicans and 54% of Democrats express “very unfavorable” opinions of the opposing party. While fewer than 25% of Americans felt this way prior to 1994, many Americans now feel so strongly about the other party that its policies or platform are a major factor as to why Americans choose to affiliate with a certain party.

While a similar poll in 2016 found that 45%-47% of Republicans considered members of the Democratic Party to be more dishonest or immoral than other Americans, that number has now risen to 72% six years later. And 63% of Democrats said they felt Republicans were more immoral – up from 35% in 2016.

In the 2016 iteration of Pew’s “Partisan Hostility” poll, 30% of Republicans said Democrats were a combination of being more closed-minded, dishonest, immoral and unintelligent than the average American – compared to 22% of Democrats about Republicans. Almost three-quarters more (53%) of Republican respondents felt this way in 2022, compared to almost twice as many Democrats (43%).

A voter fills out her ballot during early voting at ONEOK Field in Tulsa, Oklahoma, US, October 30, 2020. (credit: REUTERS/NICK OXFORD/FILE PHOTO)

Overall frustrations with the two-party system

While hostility towards the opposite end of the politician spectrum is rising among politically-loyal voters, the share of more politically-moderate Americans who express unfavorable opinions of both major parties has also grown over the past several decades.

In 1994, just 6% of the public had an unfavorable view of both the Republican and Democratic parties – a number that has more than quadrupled to 27% since.

When asked if they often wish there were more political parties to choose from in the United States, 79% of politically-independent voters said the statement describes their views “extremely well,” “very well” or “somewhat well” – compared to 11% who said “not too well” and 9% who replied, “not well at all.”

Although a majority of Republicans also agreed with the statement – 53% “extremely well,” “very well” or “somewhat well,” compared to 46% “not too well” or “not well at all” – Democrats typically had a stronger yearning for more political choices, with 73% of Democratic party supporters at least somewhat agreeing with the statement, compared to just 26% who disagreed.

In addition, the share of Democratic-leaning independents who cite frustration with the party’s leaders as a major reason for why they do not more closely associate with the party has risen from 28% in 2016 to 40% today.  Over the same period, however, the share of Republican leaners who express frustration with GOP leadership has actually declined by about the same percentage, from 52% to 39%.

While always present in American political discourse, political tensions have been on a sharp rise since 2016 – the same year Donald Trump was voted into the office of the US presidency.

Trump’s term in office was illustrated by how polarizing the support of his administration was – while many left-wing voters said Trump was generally hateful to his opponents and a potential threat to democracy in the US, right-wing voters argued that he was more authentic than previous politicians and the massive criticism of the Trump administration was itself propagated by special interests and “corrupt” career politicians.

The divide remains today, even as Trump has been out of office for nearly two years: half of Republican respondents (51%) say they like political leaders who publicly assert that Donald Trump was the legitimate winner of the 2020 presidential election, while 17% say they do not like such leaders and 31% said they neither like nor dislike such politicians.

A supporter of President Donald Trump holds a sign during a “Stop the Steal” protest after the 2020 US presidential election was called by the media for Democratic candidate Joe Biden, in front of the Arizona State Capitol in Phoenix, Arizona, US, November 7, 2020 (credit: REUTERS/JIM URQUHART)

The strong partisan divide has only grown since Trump’s term and the January 6 insurrection. 83% of Democrats have approved of President Joe Biden’s job performance over the course of his term – a sentiment shared by just 7% of Republicans for a partisan gap of 76 percentage points.

While many have strong feelings about who they prefer between Trump and Biden, a majority of Americans generally disapprove of both: According to FiveThirtyEight, Trump left office with a 38.6% approval rating after serving his term with an average approval rating in the low 40’s. Biden, who is in the midst of his first term, currently has an approval rating not much better: 39.7%.

Even amid the historically-low approval rating for the two political figures, they are still considered favorites to lead their respective parties in the 2024 presidential election. Democrats, who have been quietly weighing different options for a 2024 run, are finding that – like in 2020, when 28 candidates ran against Biden in the Democratic primaries – Americans feel even less strongly about other Democratic candidates.

On the Republican side, right-wing voters have had to grapple with the divide between Trump and career politicians. Even after the January 6 Insurrection Committee meetings, low approval ratings, previous impeachments and the recent FBI raid of Mar-A-Lago, the previous president still finds himself as the strongest candidate in a divided party.

The struggles in finding a presidential candidate that a majority of Americans can lend their support to has exacerbated the problem of political hostility and led many politically-moderate voters to feel disillusioned about the future of America’s political system. Even as the two presumptive presidential candidates boast sub-40% approval ratings, they are seen as perhaps the only viable candidates for the 2024 election.