Former US secretary of defense: Releasing Pollard doesn't make Iran deal any less of a disaster

Donald Rumsfeld reiterates warning against release of Israeli spy in 1998 and 2001 under Clinton and Bush administrations. 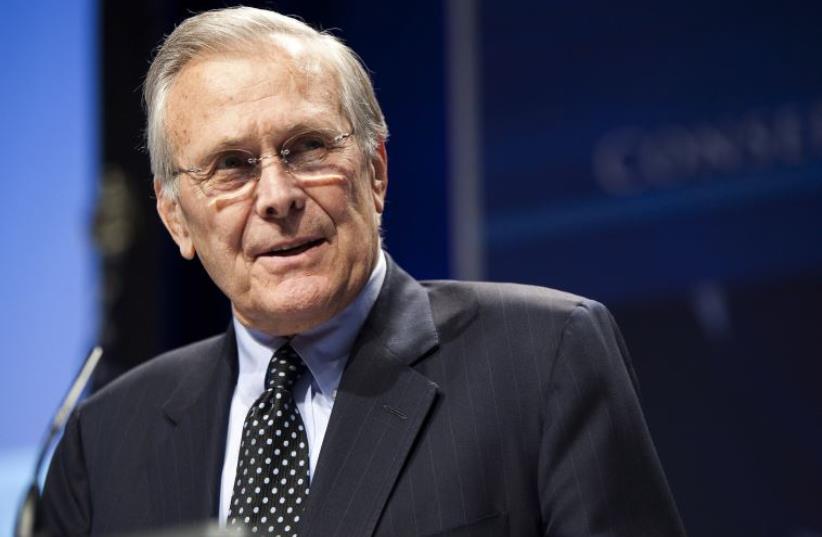 Former secretary of defense Donald Rumsfeld
(photo credit: REUTERS)
Advertisement
Former United States secretary of defense Donald Rumsfeld stated on Monday that releasing Jonathan Pollard is a bad idea, following rumors regarding the possibility that the former Israeli spy will be released early from a life sentence.
Gil Hoffman on potential Pollard release
"Releasing Pollard was a bad idea in 1998 and 2001. It is not a better idea today," Rumsfeld posted on Twitter, along with a copy of letters stating his opposition to the move, which he sent to former US presidents Bill Clinton and George W. Bush while serving as secretary of defense.

In another tweet Rumsfeld wrote, "Releasing spy Jonathan Pollard doesn't make the #IranDeal any less of a disaster for Israel and the free world," suggesting that Pollard's possible release and the Iran deal are directly related.US officials have rejected the notion that Pollard's release would have anything to do with trying to smooth tense relations with Israel over President Barack Obama's nuclear deal with Iran, which Prime Minister Benjamin Netanyahu fiercely opposes.Successive Israeli governments have appealed for Pollard's release, which would be hugely popular in Israel, but US presidents have always resisted. Pollard, 60, was convicted in 1987 of spying for Israel and sentenced to a life term.