Irish parliament to vote on motion to expel Israeli ambassador

The motion also accuses Israel of war crimes, ethnic cleansing and illegal settlement expansion, and says "the Israeli ambassador's presence in Ireland is untenable in these circumstances." 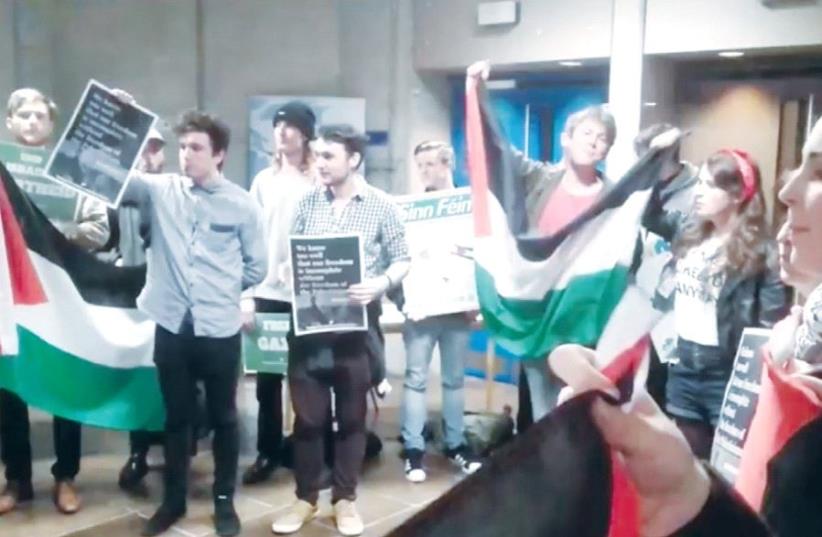 MEMBERS OF Students for a Just Palestine protest a scheduled lecture by Ambassador to Ireland Ze’ev Boker at Trinity College in Dublin, Ireland
(photo credit: FACEBOOK)
Advertisement
A motion to expel Israel’s ambassador from Ireland is expected to come to a vote in Ireland’s parliament this week.
Eleven legislators from four parties submitted the motion early last week, before the ceasefire between Israel and terrorist groups in Gaza took effect.
The motion states that “over 60 children have been murdered by the [IDF,]” and that “the current escalation of violence was instigated by the attempt to ethnically cleanse 28 Palestinian families from the Sheikh Jarrah area of Jerusalem.”
In fact, in Operation Guardian of the Walls, the IDF struck Gaza over 1,000 times and killed only about 60 civilians in total. In addition, the Supreme Court has yet to make a final ruling on the Sheikh Jarrah/Shimon Hatzadik property dispute, which involves only four Arab families who have not paid rent, though the decision could have implications for other residents of the neighborhood.
The motion also accuses Israel of war crimes, ethnic cleansing and illegal settlement expansion, and says “the Israeli ambassador’s presence in Ireland is untenable in these circumstances.”
The motions' lead sponsor, Gino Kerry of People Before Profit, a socialist party, wrote a blog post about the motion on the PBP’s website expressing outrage that “the EU has never once ever envisaged to sanction apartheid Israel economically and hold them accountable for war crimes.”
The motion would not be binding, but would put pressure on the government.
An Israeli diplomatic source shrugged off the motion saying it was tabled by a small number of “extremists,” and that Ambassador Ophir Kariv “is not packing his bags.”
However, an Irish political source said that co-sponsorship is not common in the Dáil, the lower house of parliament, and that only 11 of 160 lawmakers signed onto the motion does not reflect the amount of support for it overall.
Sinn Féin, another opposition party, which has 37 seats, plans to support the motion as well. The party’s youth wing posted an online resolution calling to expel Israel’s ambassador that had nearly 84,000 signatures as of Sunday.
The political source said that PBP and pro-Palestinian activists are aggressively lobbying members of the Dáil who may have abstained on the motion to expel the ambassador.
In addition, the source said, the coalition is considering allowing legislators to vote according to their conscience, in which case much of parties Fianna Fáil and the Greens, which are very pro-Palestinian, would likely vote in favor.
Sinn Féin, which has long taken an anti-Israel position, submitted a motion condemning “ongoing displacement of Palestinian communities in east Jerusalem and the West Bank,” and declaring that “Israel has annexed de facto the land in the West Bank on which settlements are built.”
Successive Irish governments have long been highly critical of Israel and taken a leading role in the EU in pressing for harsher responses to what they claim are Israeli abuses.
Legislation that would put heavy fines on the sale of products from the West Bank, Golan Heights or east Jerusalem has repeatedly been advanced in the Dáil and Seanad, or senate, but never became law on the grounds that it would contravene EU trade laws.