The food in the South Tyrol has many Germanic influences, so many shops sell copious amounts cold cuts and cheese. 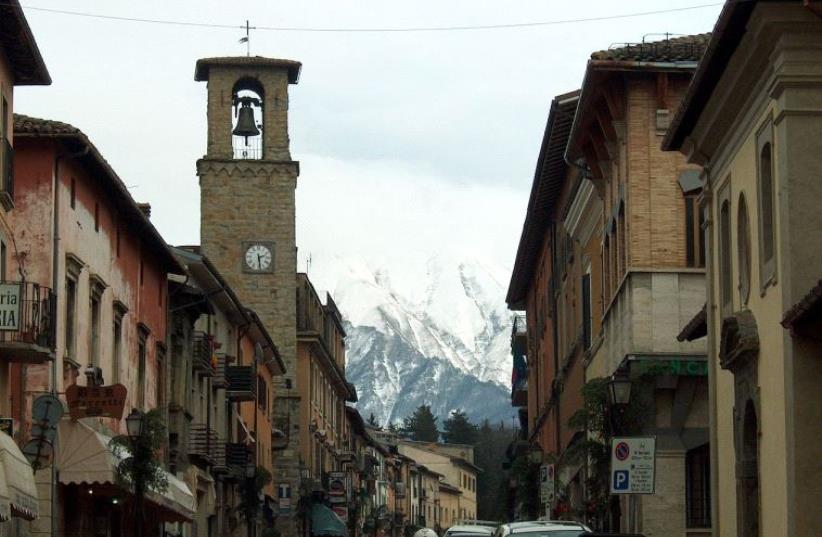 Amatrice, Italy.
(photo credit: Wikimedia Commons)
Advertisement
On our second day in the Dolomites in northern Italy in late June, we came across a small sign: “Danger of avalanches.” It was written in four languages, one of which was German. “Lawiningefefahr” apparently means “danger of avalanche.” There was no snow in sight, and the sign was apparently for the winter months when the area of soft rolling mountains and knife-like peaks becomes a playground for winter sports.The Dolomites are a UNESCO World Heritage site and one of the most beautiful parts of the Alps. They are situated in northern Italy near the Adige River, from which the region takes its Italian name “Alto Adige.” This is also called the South Tyrol. Many of the residents here speak German and most towns have Italian and German names. For instance, we stayed in the small town of Nierdorf, which is also called Villabassa.Getting to the Dolomites is probably the biggest problem travelers have. We flew into Milan and rented a car and drove five hours to get there. The road goes down by Verona and then up the beautiful large alpine valleys that lead to Brenner pass into Austria.During the First World War, this area was part of Austria and a long winding frontline meandered through the mountains. During what they called the “white war” along this front, the Austrians and Italians struggled in freezing cold temperatures, blasting trench-lines and artillery positions into the rock. There are still many remnants from the war and tourists can visit the Austrian graveyard and other areas affected by the war. In the 1930s, Mussolini’s fascist government also left its mark in the cities. In Bolzano the fascists built a massive “victory gate” that looks like the Arc de Triomphe in Paris.That dark and difficult past is gone now, replaced by mountains of tourists going to see epic landscapes such as the Tre Cime di Lavaredo, a group of three peaks made from the pale grey stone of the area. Getting to sites like these sometimes involves a mix of travel by car and with gondolas. At the Tre Cime, also called Drei Zinnen in German, one can drive up a long winding road almost to a perch below the summit at an elevation of some 2,500 meters or so. Here there is a beautiful mountain lodge that serves beer and copious amounts of uninspired food. The mediocre fare, which consists of things like meat patties, is made up for by the amazing views of the valleys below.An hour hike brings one to the base of the Tre Cime themselves. It is understandable how this area became such a tourist attraction. The ease of access coupled with the breathtaking beauty is unmatched. The whole of the dolomites seems to be pockmarked with little unique lakes, valleys and communities that all offer the same kinds of scenic surprises. One day we drove down to the Lake di Braies, which is apparently quite famous. A massive hotel overlooks the sparkling waters of the lake and a carriage path circles it. Traveling with a young child can be difficult, but the paths here have varying levels of difficulty and our family found plenty of things to do. Around the corner of the lake, another path leads to a “mountain hut,” where, like the other huts, beer and meat is on the menu. Cows graze about.The food in the South Tyrol has many Germanic influences, so many shops sell copious amounts cold cuts and cheese. Dinner at the Hotel Adler, where we stayed, included a multi-course menu every evening.There was Mozzarella with tomatoes, slow-roasted meat, soups and pasta. One night a traditional accordion player danced around and played his instrument. The Dolomites are probably worth up to a week of travel, and it is good to find a base of operations, like the Hotel Adler, and then spend the days hiking and exploring. Our hotel also had a pool and sauna that offered welcome relaxation after a long day.After the Dolomites, we drove south for another five hours to Chianti, where we stayed at the Riserva di Fizzano. About an hour from Florence and located in the wine-famous Chianti region, this was an ideal spot to relax and enjoy the culinary crusade of this part of Italy. Famous for its beef and wine, there’s little to make you sad here. The sunsets over the vineyards, the pools to swim in and the epic cheeses that accompany dinner are exquisite. Chianti also offers a great deal of history, from the towers of San Gimignano to the walled town of Monteriggioni. In Siena, the cobbled streets give way to the famous Pizza del Campo, a giant public plaza ringed with restaurants. Take two days and go to Florence to see the famous Duomo and Uffizi gallery, but book a few months ahead of time to avoid the lines.Italian meals seem to consist of a never- ending amount of food segmented into several courses. At a restaurant called Albergaccia di Castellina in Castellina in Chianti, the “primo piatti” consisted of risotto with goat cheese mousse or hand-made ravioli filled with blue cheese. For the meat dish there was Florentina T-bone steak of Chianina beef or local lamb flavored with myrtle and roasted with vegetables. If you’re gluttonous, have the “gran menu degustazione’ for 68 euros that includes an eggplant appetizer, the ravioli, beef cheeks, roasted piglet, selection of cheeses and some sort of strawberry sorbet.Must one go on? If you can eat all this and walk to the car you deserve a reward. Surely there is at least a bottle of wine to be drunk as well.