On This Day: Ottomans surrender Jerusalem in World War I

The British would continue to hold onto the city until fully withdrawing from Mandatory Palestine in 1948.

December 9 marks 104 years since the Ottoman surrender at the Battle of Jerusalem, winning major morale and strategic victory in a key city in this important World War I battle.

The battle itself was the culmination of a long, bloody campaign in the Middle East by the British against the Turks, something that had been up to a rough start for a while.

Throughout World War I, British forces suffered multiple humiliating and costly losses against the Turks. This included the disastrous Gallipoli campaign, the Battle of Kut in modern-day Iraq and two losses in Gaza.

Taking the holy city was important, not just because of the religious symbolism for the largely-Christian UK, but because it was vital for Ottoman supply routes and for the British to establish a stronger position.

Fortune began to change when, after a second loss at Gaza, the commanding general of what had been dubbed the "Egyptian Expeditionary Force," Gen. Sir Archibald Murray, was replaced with Gen. Edmund Allenby, who had been given instructions by the prime minister: Capture Jerusalem by Christmas.

This was easier said than done. The Ottoman front line dominated the South with trenches, redoubts and fortifications, as well as key roads and railway lines.

But at the end of October, Allenby finally led the British to victory over the Ottomans in the Battle of Beersheba, beginning the British Army's advance into the region, pushing back the Ottomans.

A week after Beersheba was taken, Gaza finally fell. Allenby's eyes were on Jerusalem. And this, too, was no easy feat. Maps of the region were inaccurate, and the Ottomans had already begun fortifying the area with fences. Supply efforts had to be organized to keep the troops stocked with food, water and ammo, but they were already far from easily suppliable areas - made worse by Ottoman destruction of existing supply infrastructure as they pulled back.

The battle itself is thought to have begun on November 17, and it was not one simple clash for the city. Rather, it was a complex series of battles throughout the region, with fighting even happening as far as Jaffa. It saw decisive clashes as the outnumbered British forces were forced to contend with numerically superior Ottoman troops, as well as struggling to maintain supplies coming from Beersheba - something the Ottomans were keen to take advantage of.

The Ottomans had launched counterattacks on British supply and communication lines, hoping to isolate and weaken them. But ultimately, they couldn't win enough ground. The British held firm and stayed dug in by the city, and fresh troops from the rear were able to replace the tired ones entrenched in the front.

It soon became apparent that the city was lost. In fact, much of the Ottoman forces and commanders had actually fled the city at this point.

The British Army had almost completely encircled the city, and on December 9, the city's mayor, Hussein Salim al-Husseini, gave a letter of surrender. 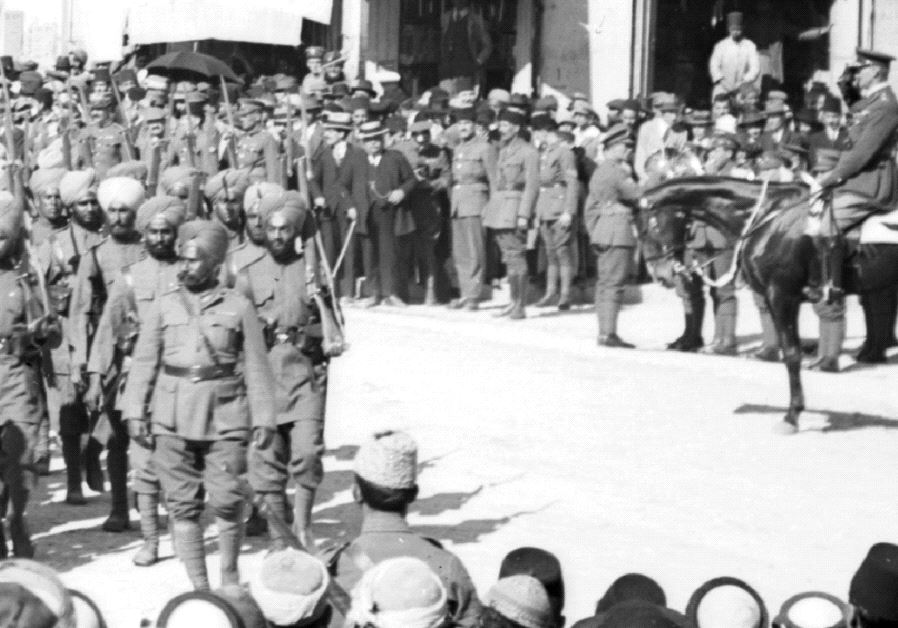 General Allenby on his horse saluting the Indian troops outside of Jerusalem’s Jaffa Gate on December 11, 1917 (credit: LIBRARY OF CONGRESS)

Two days later, Allenby himself would arrive in Jerusalem for a formal entrance into the Holy City, now under British control.

Allenby rode to the gates of the Old City, dismounted, and led a phalanx of officers through the Jaffa Gate entrance to the David’s Citadel where he addressed a large crowd of Jerusalemites.

He deliberately chose to walk into the Old City because, he said, only the Messiah should ride into the Holy City.

Among the officers marching behind him was T.E. Lawrence, known later as Lawrence of Arabia. Despite his exploits on the other side of the Jordan River, he was to write of his Jerusalem experience, “This was, to me, the most supreme moment of the war.”

Speaking from a platform at David's Citadel, Allenby read: “To the inhabitants of Jerusalem the Blessed, and the people dwelling in its vicinity. The defeat inflicted on the Turks by the troops under my command has resulted in the occupation of your city by my forces.

“I, therefore, here and now, proclaim it to be under Martial Law, under which form of administration it will remain so long as military considerations make it necessary.

“However, lest any of you should be alarmed by reason of your experiences at the hands of the enemy who has retired, I hereby inform you that it is my desire that every person should pursue his lawful business without fear of interruption.

“Furthermore, since your city is regarded with affection by the adherents of three of the great religions of mankind, and its soil has been consecrated by the prayers and pilgrimages of devout people of that three religion for many centuries, I make it known to you that every sacred building, monument, holy spot, shrine, traditional site, endowment, pious bequest or customary place of worship, of whatever form of the three religions, will be maintained and protected according to the existing customs and beliefs of those to whose faith they are sacred.”

The British would continue to hold onto the city until fully withdrawing from Mandatory Palestine in 1948.

However, the battle itself wasn't over just yet. Fighting over Jerusalem would continue until the end of the month, with numerous other engagements taking place.

The battle was a major victory for the British on several levels. Politically, it achieved the promise of capturing Jerusalem before Christmas, giving a major Christian morale boost. Consequently, the Ottomans suffered the humiliation of losing control of such an important Muslim holy site.

Strategically, the capture of Jerusalem enabled the British to set up a strong defensive line, stretching to the Mediterranean and, eventually, to the Dead Sea. It was a major British military success, and highlighted the incredible gains in the campaign, compared to the struggles faced by British forces on the Western Front.

From this position, the British Army would continue to push through the region, culminating in the eventual capture of the rest of the Holy Land and later Syria before the Ottomans finally surrendered, ending their role in the war for good.

Barry Shaw contributed to this report.