By REUTERS
FEBRUARY 7, 2014 19:29
Four Olympic rings, Sochi opening ceremonies.
(photo credit: REUTERS)
Advertisement
SOCHI, Russia - In what appeared to be a technical hitch during the opening ceremony at the Winter Olympics in the Russian city of Sochi on Friday, one of the five rings that make up the Games' symbol failed to open.The apparent failure meant the ring could not be illuminated by fireworks as had happened during rehearsals.Five giant snowflake-shaped structures suspended from the roof of the Fisht Stadium on the shores of the Black Sea in Sochi were supposed to open into circles and then light up with pyrotechnics.Only four opened, and that particular feature, near the very start of the 2-1/2-hour opening ceremony, was abandoned.Russian President Vladimir Putin has staked his reputation on staging a safe and successful Games, despite threats from Islamist militants to disrupt them. Meanwhile, further north in Russia, police detained gay rights activists who tried to protest on Moscow's Red Square and in St Petersburg shortly before Putin opened the games, gay rights activists said.The protests followed international criticism of a law the Russian president signed last year banning the spread of "gay propaganda" among minors.Police in Moscow and St Petersburg did not immediately comment on the reports by the gay activists, who said 10 protesters were detained in Moscow and four in Russia's second city. 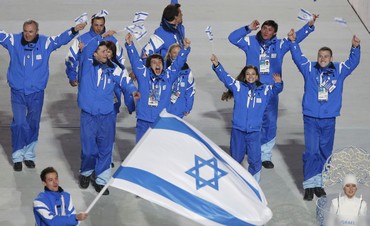 (Israel's delegation at opening ceremony at Sochi, February 7, 2014)A list posted by one rights activist on Facebook said two of those detained in Moscow were women from Sweden.In St Petersburg, the protesters were detained after unfurling a banner declaring "Discrimination is incompatible with the Olympic Movement", gay rights group All Out said.Putin has said there will be no discrimination at the Games and the Russian government says the law is needed to protect young people.Gay rights groups say the new law discriminates against gays and that it has fueled attacks on homosexuals in Russia, but Putin says it is needed to protect young people.Israel has sent five athletes to Russia, two more than it did to the Games in Vancouver four years ago.