By ASSOCIATED PRESS
MAY 9, 2010 13:33
Peres Putin 311
(photo credit: Government Press Office)
Advertisement
US, French and British troops strode across Red Square for the first time Sunday in a Victory Day parade marked both by the usual impressive display of Russia's military might and an emphasis on international cooperation.In recent years, the parade commemorating the 1945 defeat of Nazi Germany has been used by Russian leaders to launch veiled criticism of the West, but President Dmitry Medvedev struck a different tone this year."Today at this solemn parade, the soldiers of Russia, the states of the CIS and the anti-Hitler coalition march together," he said in his address to the more than 11,000 soldiers on the vast square. "Only together can we counter present-day threats. Only as good neighbors can we resolve problems of global security in order that the ideals of justice and good triumph in all of the world and that the lives of future generations will be free and happy."Foreign leaders in attendance included German Chancellor Angela Merkel, China's Hu Jintao, Israeli President Shimon Peres and acting Polish President Bronislaw Komorowski, whose predecessor died last month in a plane crash in western Russia along with many of Poland's political and military elite.Italy's Silvio Berlusconi and France's Nicolas Sarkozy had been expected to attend, but stayed home in order to be available for possible developments in Europe's financial crisis.Meanwhile in Jerusalem, hundreds of World War II veterans from all over Israel converged on Jerusalem to participate in a Victory Day march organized by the Ministry of Absorption and Immigration.Jerusalem Mayor Nir Barkat, opposition leader Tzipi Livni and Minister of Absorption and Immigration Sofa Landver were among the speakers at the march's terminus.RELATED:
Peres salutes Red Army ahead of visit to MoscowVictory Day, Russia's most important secular holiday, always sees elaborate observances throughout the country, but this year's was especially intense, with holiday preparations and parade rehearsals dominating TV news reports for the past week.Such attention appeared in part to be a tacit acknowledgment that even the youngest World War II veterans are in the last years of their lives.Some of Medvedev's address carried that valedictory sentiment, assuring the veterans that recognition of their valor would outlive them."Time has great power, but it is weaker than human memory," he said. "We will never forget the soldiers fighting on the front, the women replacing men in the factories, the children undergoing suffering unthinkable for their age.""This war made us a strong nation," Medvedev said.The military strength was on clear view. Tanks, armored personnel carriers and lumbering Topol-M intercontinental ballistic missile launchers rumbled across the square, and warplanes and helicopters streaked overhead.The display included WWII-era T-34 tanks and some military units wore period uniforms. 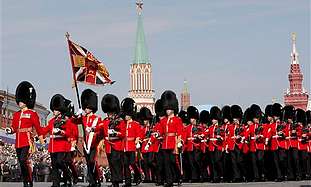 The US, British and French troops each marched in units of about 75. Squads from Poland and Turkmenistan also took part. Parades and other celebrations also took place throughout the country.Victory Day often brings violenceBut amid the nationwide assertions of strength and pride were violent reminders of the unrest that plagues Russia's Caucasus republics.A car bomb explosion killed two people near a Russian military base Sunday and a soldier was killed in a separate blast in the same city of Kaspiisk — where a Victory Day parade bombing in 2002 killed 43 people.Insurgents have often chosen the holiday to launch terrorist attacks, including the 2004 killing of Chechen President Akhmad Kadyrov, who died in a bomb blast while attending a military parade at a stadium.Kaspiisk is in Dagestan, which is Chechnya's eastern neighbor and which has been plagued by insurgent violence for more than a decade.

In the week leading up to Victory day, Medvedev several times raised Russia's frequent complaint that other countries denigrate or misconstrue the Soviet Union's contribution to World War II, in which more than 26 million Soviets are estimated to have died, including more than 8.5 million soldiers.But he mentioned the issue only in passing on Sunday and the address reflected his aim of reducing Russia's confrontational image.Medvedev also used the Victory day preparations to criticize Josef Stalin, the Soviet dictator whom many supporters credit with leading the Red Army to victory in the war.Some Moscow museums displayed small posters of Stalin ahead of the holiday and a splinter Communist faction painted his face on a city bus in St. Petersburg, fueling fears that his reputation was being quietly rehabilitated.