Now meet the Quint, so called in a British Foreign Office communiqué on Friday introducing a condemnation of Israeli plans to build new housing units in the settlements. 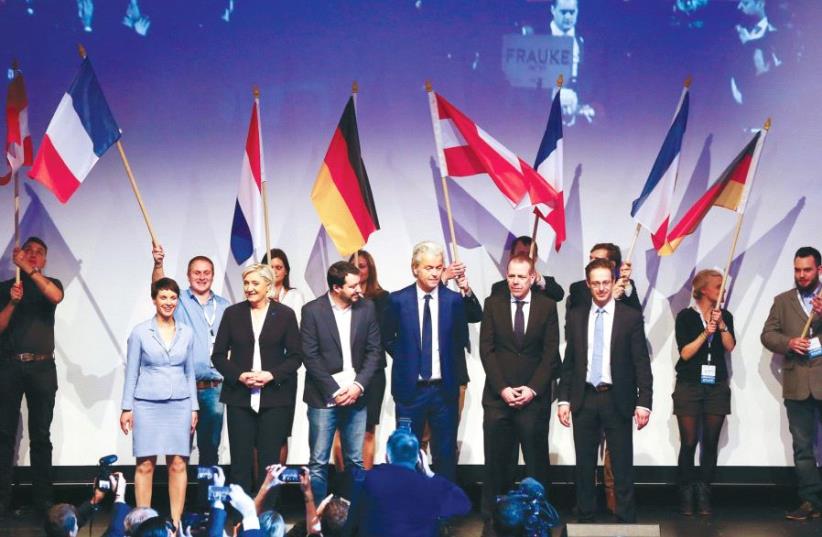 LEADERS OF far-right European political parties arrive on stage for a meeting in Germany over the weekend to discuss the state of the EU.
(photo credit: REUTERS)
Advertisement
Move aside, the Quartet; make room, the E3+3 (or P5+1, depending on your vantage point). It is now time for the Quint to start making some Mideast news.You remember the Quartet, that framework that consisted of the US, EU, Russia and the UN that dominated Mideast diplomatic efforts in the first decade of the current century.Then there was the E3+3 – France, Great Britain, and Germany, plus Russia, China and the US – that negotiated with Iran over the nuclear deal (outside of Europe this group was known as the P5+1, standing for the five permanent members of the UN Security Council, plus Germany).Now meet the Quint, so called in a British Foreign Office communiqué on Friday introducing a condemnation of Israeli plans to build new housing units in the settlements.“Quint statement on Israeli settlements,” was the headline on the statement from October 16, blasting – in the names of the governments of the UK, France, Germany, Italy and Spain – the “decision taken by the Israeli authorities to advance more than 4,900 settlement building units in the occupied West Bank.”There is nothing surprising in this communiqué that states that the expansion of settlements “violates international law and further imperils the viability of a two state solution.” That is predictable European fare, as is the rest of the communiqué, when it comes to settlement decisions.What is unusual is not the language, but the framework. This anti-settlement communiqué was not taken by the entire EU (Britain, by the way, is no longer a member of the 27-member body), but rather by its largest states which comprises some 57% of the EU’s nearly 450 million people.Why was the statement issued “only” in the name of this quintet of states? Simple, because the EU, whose foreign policy decisions are to be made by consensus, no longer has a consensus position on Israel and the Middle East.There was a time not long ago when meetings of EU foreign ministers – the European Foreign Affairs Council – ended with statements regarding the Middle East Peace Process (MEPP).But those days have long gone, as Prime Minister Benjamin Netanyahu has successfully formed sub-alliances inside the EU – with the Visegrád countries on one hand (Hungary, Poland, the Czech Republic, and Slovakia), the Baltic countries on the other (Latvia, Lithuanian and Estonia), as well as with Cyprus and Greece, the Balkan states of Bulgaria, Romania and Croatia, and Austria. The last time the Foreign Affairs Council was able to issue a consensus statement on the Middle East peace process was in 2016. Since then unanimity on the issue inside the EU has proven elusive.The countries making up these sub-alliances in the EU are not willing, as EU countries were in the past, to fall into line with reflexive condemnations of Israel, be it concerning the settlements, the use of force, or even Jerusalem.This new dynamic was first seen most starkly in May 2018 when Hungary, the Czech Republic and Romania blocked a joint EU statement slamming the move of the US embassy to Jerusalem. Instead, a number of individual EU states – France, the Netherlands and Ireland among them – criticized the move, but in their own names, not in the name of the entire EU.Last Friday was not the first time the Quint made an appearance. That distinction apparently came last year in September, when the five European countries issued a statement expressing “deep concern” at Netanyahu's announcement just prior to that month’s elections of his intention to annex the Jordan Valley. Again, the Quint went out on its own because a consensus EU opinion of the matter was unattainable. Even in the great debate over the possibility of annexation this summer, there was no EU unanimity on how to respond. As a result there was no statement threatening punitive actions or sanctions, as some of the EU countries – such as Luxembourg, Ireland and Sweden – would have liked to see. The ambassadors to Israel of France, Germany, Italy and Spain (the Quint minus 1) sufficed with publishing a letter warning Israel against the move.The Quint’s statement on the settlement decision last week, therefore, shines more light on the growing lack of unanimity inside the EU toward Israel and the diplomatic process, than it does on the policy regarding settlements.Everyone knows that Britain, France, Germany, Spain and Italy (depending on the government) will blast Israel for any settlement announcement. What they might not realize is that it is increasingly more difficult to get the rest of the EU to fall into line when it comes to slamming Israel, even on an issue as unpopular internationally as settlements.