“I spoke on behalf of the six million Jews slaughtered in the Holocaust and also for one personal individual, my wife’s grandfather who survived the holocaust and I told his story.” 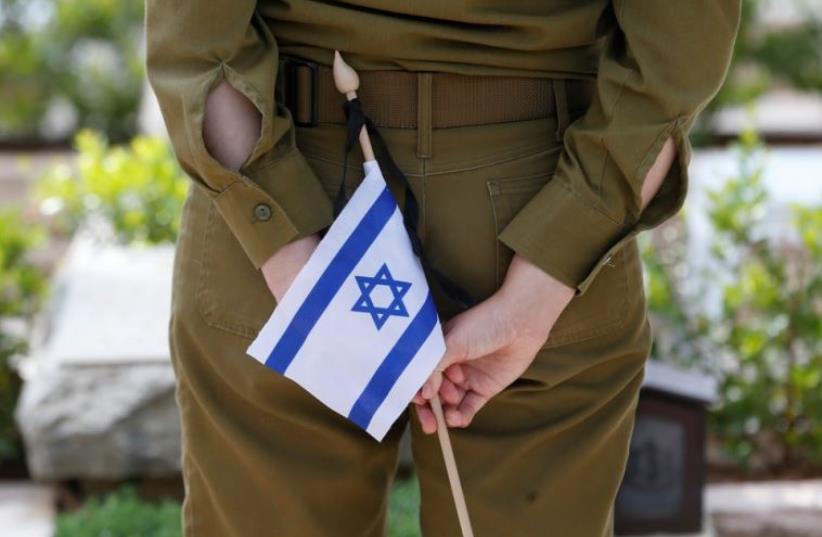 An Israeli soldier holds a flag next to the grave of a fallen soldier during a ceremony ahead of Memorial Day
(photo credit: REUTERS)
Advertisement
International Holocaust Memorial Day that was marked on January 27 included a unique event in Pennsylvania that brought together IDF officers and members of the US military.
The event was the brainchild of Lt.-Col. Shai Schul, Israel’s Security Assistance Liaison Officer to the US Army, and was why he was in Pennsylvania at the time of this year’s commemoration.
Schul works with the US Army Security Assistance Command, sometimes called the US Army’s “face to the world,” a unit that assists eligible foreign governments with logistics in foreign military sales. Israel is a key part of that system.
Located near Harrisburg, Pennsylvania, Schul decided this year to initiate an event with the US Army and commemorate the Holocaust and explained that “I run every morning. On one of the runs along the river in the Pennsylvania capital, I saw a Holocaust monument that is unique and was built a few years ago, and I thought that this is a place at which I want to hold a commemoration and I chose the International Holocaust Memorial Day for the occasion.”
The event took place with the US Army and included members of the local Jewish community. Due to COVID-19 restrictions the ceremony was relatively small, Schul hopes it will grow in coming years.
“I spoke on behalf of the six million Jews slaughtered in the Holocaust and also for one personal individual, my wife’s grandfather, who survived the Holocaust and I told his story,” Schul said. “This is the first time I took part in an event like this in the US, and it was the first time for the unit I am assigned to. It’s a big unit with a two-star general running the unit and this was the first time they have held a Holocaust memorial event, and it was special.”
He said that he was praised afterwards by colleagues and counterpart officers. Remembering the Shoah is not just a Jewish responsibility, but for everyone, he noted.
In his speech, Schul emphasized the stories of Auschwitz and the horrors of surviving the freezing winters in death and concentration camps.
“Ladies and gentlemen, distinguished guests, representatives of the Jewish community, my colleagues, officers from around the world,” he said., “today we stand here in Harrisburg, Pennsylvania, 76 years after Auschwitz-Birkenau, the largest Nazi concentration and death camp was liberated.”
He emphasized the importance of “never again,” in his speech to the attendees. “Remember and never forget.”
Other international officers were present, including a German officer and a Greek colleague. Schul said there is declining knowledge about the Holocaust in the US and other places.
“One thing I found [through research] is that only 50 percent of the young Americans know the name of one concentration or death camp, and the others don’t know even know one name of a camp,” he said. “But when I initiated with the US army, with commanders, they knew the history, and together we need to make sure that in our time we must make sure ‘Never Again.’”