The Jerusalem District Police said they sought to ensure the proper functioning of the marathon by dealing with any threats and “intentions by various parties to try to disrupt the event.” 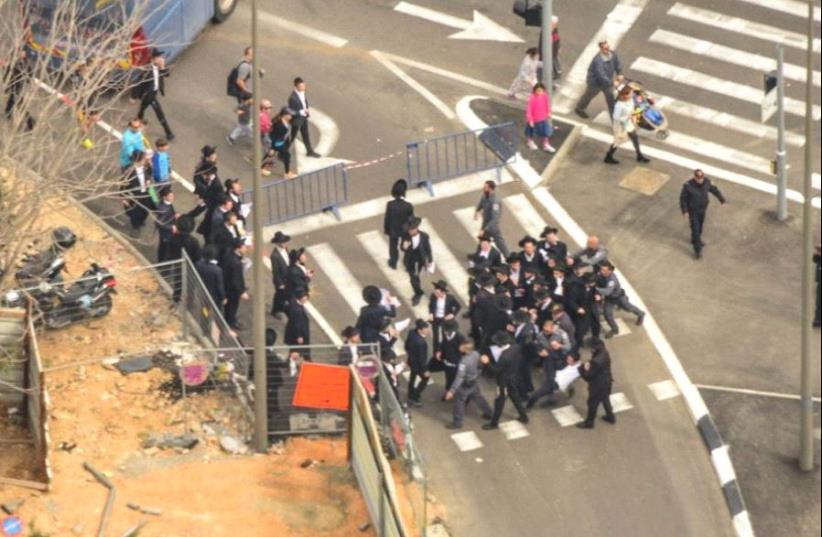 Haredi protesters at the Jerusalem marathon.
(photo credit: ISRAEL POLICE)
Advertisement
Police stopped around 100 haredi (ultra-Orthodox) persons from attending the Jerusalem Marathon on Friday on suspicion that they sought to disrupt the event. Meanwhile, other groups of haredi men evaded police measures and were able to disrupt the marathon by shouting at runners, and in one video are seen laying down in the road. Some 3,000 police officers, working in coordination with the Jerusalem Municipality and private security personnel, were out in increased numbers due to threats from members of the haredi community. In a statement, the Jerusalem District Police said they sought to ensure the proper functioning of the marathon by dealing with any threats and “intentions by various parties to try to disrupt the event.” “Starting from the morning, dozens of ultra-Orthodox tried to get to the marathon route from the nearby streets to disrupt the marathon,” police said. The Jerusalem Marathon kicked off from Gan Sacher park on Friday morning with about 30,000 people registered to participate in the event. The winner of the full marathon was a 26-year-old man from Kenya named Shadrack Kipkogey, with a time of 2:17:36, according to the the Jerusalem Municipality. Other protestors were photographed by French News Agency AFP, holding signs claiming that the marathon ran through occupied land.