Dimona Mayor Ben Biton praised one of the victims, Simcha Damri, for her years of charity work helping out needy families in Dimona, and called her “one of the foundations of the city." 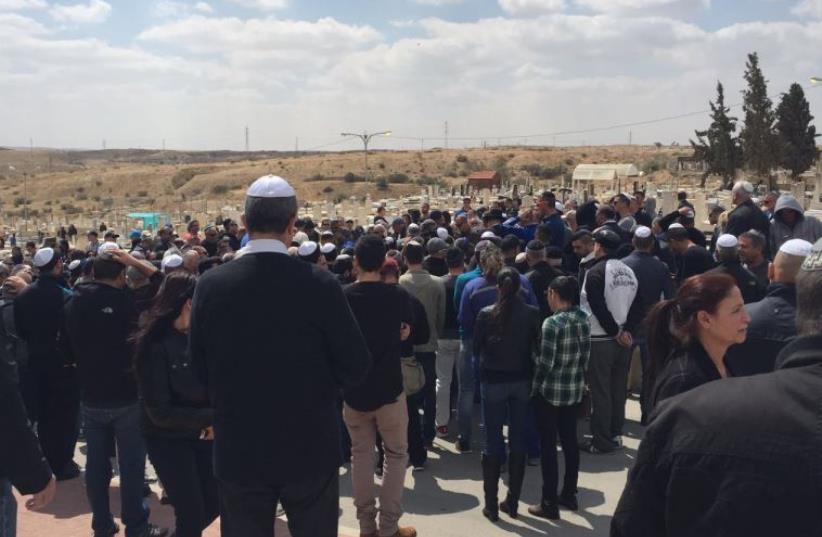 Funeral of Simcha Damri‏
(photo credit: DAVID GOZLAN)
Advertisement
For Nadav Damri, his family’s nightmare began with a phone call from his father in Istanbul on Saturday.“I don’t wish for anyone to receive a call like the last one I got from Dad. He told me, there was a terrorist attack, I’m hurt and they can’t find mom. This is when our nightmare began.”Damri spoke of the nightmare phone call Monday before hundreds of loved ones in Dimona who came to bid farewell to Simcha Damri, a local mother of four known for her charity work, who was murdered along with two other Israelis and an Iranian citizen during a suicide bombing in Istanbul on Saturday.“We are so much alike, we always shared everything, and now I don’t have anyone to share things with,” he said, breaking down and sobbing for the woman he called not only his mother, but his best friend as well.Simcha was part of a group of Israelis who were visiting Turkey on a culinary tour and had just finished dining at a restaurant on the famous Istiklal Street when a suicide bomber blew himself up next to the group after they exited the eatery. She was killed, along with Israelis Avraham Goldman, a 69-year-old father of three from Ramat Hasharon, and 40-year-old Yonatan Shor, a father of two from Tel Aviv. An Iranian citizen also was among the killed.Simcha’s husband Avi – a well-known local Dimona businessman – was moderately wounded in the blast and, on Monday, was still hospitalized in Soroka Hospital in Beersheba and unable to attend his wife’s funeral.Instead, he gave a note to his daughter Adi, which she read for her mother at the cemetery.“I don’t know what has happened, I only know that the world has been destroyed,” he wrote, adding: “So many people have been left behind, all of the families that you helped, Yochai, Nadav, Ben, Adi [the couple’s four children]. I will be strong for them and keep the family together.”Avi was planning a surprise party to celebrate Simcha’s 60th birthday next month, his children said Monday.Dimona Mayor Ben Biton praised Simcha for her years of charity work helping out needy families in Dimona, and called her “one of the foundations of the city,” adding that “ Helping others and the desire to do good were part of who she was.”Deputy Minister Ayoub Kara spoke on behalf of the government at the funeral, expressing the assessment that the deadly attack “will bring back good relations with Turkey [since] they now understand that terrorism is not only against Israel and the Jews.”Hours later, hundreds gathered in Holon to pay their last respects to Avraham Goldman of Herzliya.The mourners included his widow, Nitzah, who was wounded in the attack and was brought to the funeral in a wheelchair, still wearing her wristband from Sheba Hospital at Tel Hashomer.Also in attendance were the owners of the Beygale tour company, which organized the culinary tour to Istanbul. On the company’s homepage they still have a page advertising the next trip to Istanbul, leaving April 7.Goldman’s daughter, Sharon, said friends and loved ones tried to talk Avraham and Nitzah out of the trip to Istanbul because of the security situation, but that he was not swayed, saying there are terrorist attacks in Tel Aviv and New York, as well.Sharon also spoke of her father, who was the son of a Holocaust survivor and, as a young man, worked as lifeguard and later as a tour guide.She described how her father and mother opened a textile factory employing Arabs and Jews together.“Everyone became one family. You thought this was the way to peace and co-existence, even in challenging times,” she said.Just two days after her father was murdered by a terrorist, she said: “We will not give in to hatred and revenge, the wickedness will not poison us.”Monday evening, Yonatan “Yoni” Suher, 40, a married father of two from Tel Aviv, was buried in the cemetery at Kibbutz Shiller in central Israel where he was raised.Suher served in the IDF’s Military Police Corps, and received a law degree before working in the hi-tech industry.At the time of the attack, Suher was on vacation with his wife, Inbal, to celebrate his birthday.Inbal, who was also wounded in the blast, underwent emergency surgery in Turkey on Saturday night. Her current condition remains unclear.Yoni spent most of his life in Israel, but, according to a cousin, his American roots ran deep. He was born in Oregon like his father Randy, who initially came to Israel in the 1960s as a kibbutz volunteer and later fell in love with a local girl named Yael, the cousin said.He and Yael eventually married and raised five children on Kvutzat Shiller, but they always stayed close to their loved ones back in the Pacific Northwest, he said.The cousin added that Yoni and his brothers were big fans of the Seattle Seahawks and the Portland Trailblazers, and that, two years ago, the siblings went on a road trip across the Pacific Northwest – a classic American rite of passage that meant a great deal to them.As Americans, the family was also touched by the remarks made at the funeral by William Grant, the deputy chief of mission at the US Embassy, the cousin said.