Over 850 volunteers to conduct Yom Kippur services in secular communities

The male volunteers lead the services, and at least ten are sent to every community to ensure there is a minyan. 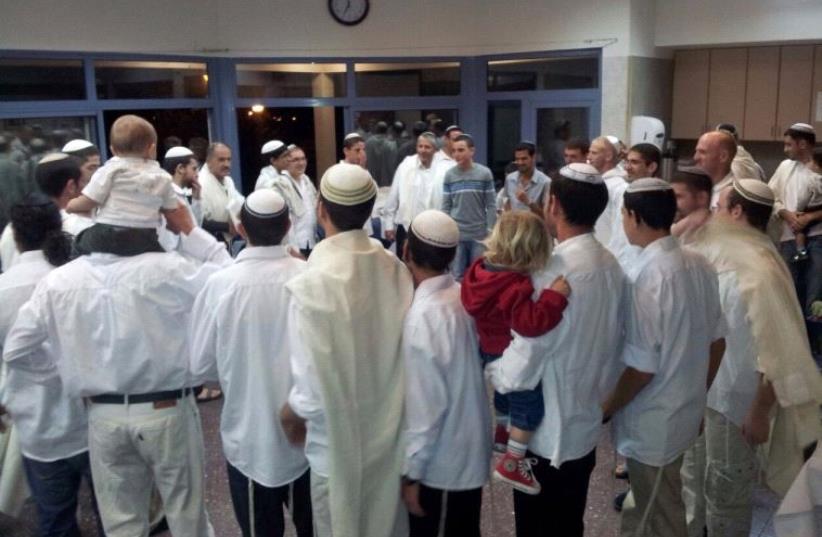 Kibbutznikim and religious volunteers dance and celebrate at the end of Yom Kippur at Kibbutz Ortal last year
(photo credit: COURTESY PANIM EL PANIM)
Advertisement
Throngs of Israelis will flock to synagogue Tuesday night and Wednesday to participate in Yom Kippur prayers and observe the fast. But, while services for the holiest day on the Jewish calendar abound in major towns and cities, secular kibbutzim and smaller communities can encounter problems finding prayer leaders, a quorum and other prayer necessities.Rahamim Hayat of Kibbutz Geshur in the Golan Heights describes himself as religiously traditional, although not strictly observant, said he was surprised to find that there was no synagogue on the kibbutz when he and his family moved there.“We are all Jews, this is our heritage, and it is Yom Kippur, so there is still a desire to have an experience and a connection with our traditions on this day,” says Hayat.For the past seven years, however, Panim el Panim, a religious organization that promotes Jewish identity and informal education, in cooperation with local religious councils, sends small groups of religious men and women to kibbutzim and other small communities to help conduct Yom Kippur services.This year, the organization will send delegations to 70 communities throughout the country. More than 850 volunteers are participating this year.The male volunteers lead the services, and at least 10 are sent to every community to ensure there is a minyan, or prayer quorum, for the duration of the day-long prayers.Both the men and the women help create a holiday atmosphere by singing and chanting with the prayer leader during the various songs, poems and prayers.Hayat, who is a resident of Geshur but not a member, was involved in organizing a Yom Kippur service with the participation of Panim el Panim at the outset of the project.He received permission from kibbutz management to use an unused club house for occasional prayer services, including for Yom Kippur, and when the regional religious council contacted communities about the possibility of bringing a group from Panim el Panim, Hayat got permission to accept the offer.Kibbutz Geshur was founded by the secularist Hashomer Hatzair so, unsurprisingly, there was a small amount of opposition, but Hayat says 90% of members agreed to the idea and, today, no one is opposed.“We have a really fun atmosphere in the services. The volunteers from the group go along with requests we make for certain melodies we are used to, and we go along with suggestions they make, as well. Everyone participates and we feel like a family together.”Hayat says 20 to 25 people from the kibbutz attend all the Yom Kippur services, while 70 to 80 are present for the Kol Nidre and Ne’ila prayers at the beginning and end of the fast, out of a total of some 200 members.Volunteer Meir Peled, 36, will be going to Kibbutz Masaryk, just south of Acre, for the fifth year in a row to lead and participate in the services there, along with approximately 15 other men.“This project has shown that people want a connection to Judaism. They see Yom Kippur as a good time to do this, and so it’s important for me to help in this way,” says Peled.“It’s obviously different from praying in a yeshiva or with a religious community, but this also is unique and special. This is a way to bring the Jewish people together, to make contact between different sectors of society and make us more united,” he adds.Peled stresses that the project is not intended to make people more religious, but simply to give them an opportunity to have an authentic Yom Kippur experience on the most important day of the Jewish year.Approximately 100 Masaryk residents participate in the Yom Kippur services, several of whom participate in leading the responsive elements of the prayers and all of whom express appreciation for the initiative, says Peled.The purpose of the program, according to Yair Gantz, deputy director of Panim el Panim, is to provide a solution for the real demand among secular communities for a meaningful and traditional Yom Kippur experience.“The heritage of the Jewish people was passed down through the generations and, although at a certain stage people started dispensing with it, there is now increasing demand to regain familiarity and closeness with that heritage. We’re trying to help fill that gap, in this case, on Yom Kippur.“Everyone feels [as though they are a] part of the Jewish people, and many people want to experience this in some way and preserve the connection to Jewish tradition, especially on the holiest day of the year,” says Gantz.