One year on: Friends and colleagues remember 'eternally optimistic' Peres

A year after his passing, friends, family and colleagues from around the world reminisced about Shimon Peres in Jaffa Wednesday. 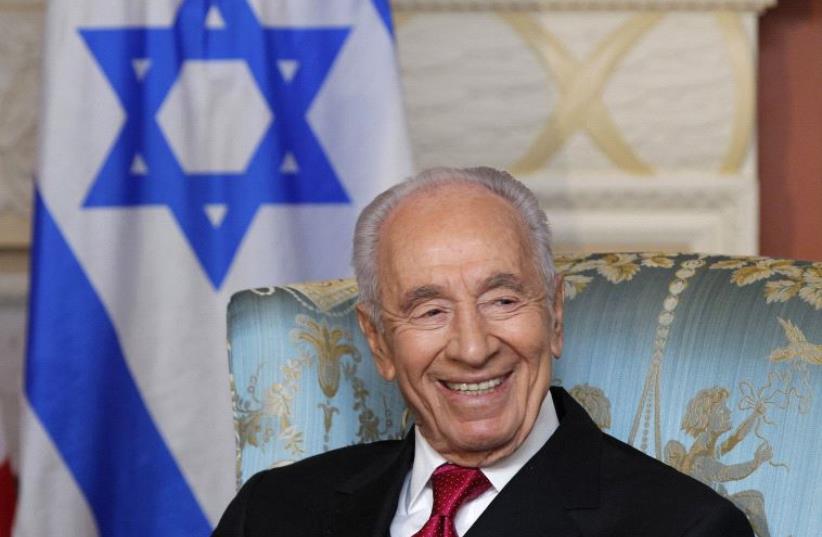 Shimon Peres takes part in a meeting in Ottawa, May 2012
(photo credit: REUTERS)
Advertisement
With the passing of a year since the death of the state’s ninth president Shimon Peres, relatives, friends and colleagues from around the world assembled at the Peres Center for Peace and Innovation in Jaffa on Wednesday to reminisce about him and to review his legacy.The common threads expressed by Peres Center chairman Chemi Peres, President Reuven Rivlin and a series of entrepreneurs and innovators were that Shimon Peres was an eternally optimistic man of vision, inspiration and unquenchable curiosity with a rare gift for looking into the potential uses of innovative products and correctly assessing their future impact on humanity.The 200-seat auditorium was packed and people were lining the walls.Those unable to get in remained on the ground floor and watched the proceedings on a video screen. Chemi Peres said that he had not prepared a speech because he wanted to speak from the heart. He was grateful to the many people who had come from abroad to pay tribute to his father, who believed that science and technology in the pursuit of peace can change the world and make it a better place.Quoting his father, Peres said that innovation has no barriers or borders and enables dialogue between peoples. He recalled that just over a year ago, many of the same crowd had been present for the inauguration of the Peres Center for Innovation, which is scheduled to open next year. Over the past year, he said, much thought had been given to how the Center for Innovation will reflect his father’s vision.“It will be a source of pride to all Israelis,” Peres pledged, adding that they would be able to see for themselves what Israel has contributed toward making the world a better place. He was certain that people from all over the world would come to see what modern Israel has achieved and what it can do.Rivlin, taking this a step further, listed some of the recent transactions in which companies that had accomplished some of Israel’s technological breakthroughs had been sold to major global enterprises. Israel’s human capital, he said, is far greater than its natural resources.Peres had seen that human capital as being all inclusive – namely that it would encompass Arabs, haredim and all other Israeli citizens, he said.Citing a report by the Office of the Chief Scientist in the Economy Ministry (which was actually renamed the Israel Innovation Authority in 2016), Rivlin noted that the number of Arab students studying hi-tech subjects increased by 60% from 2012 to 2016, and that a thousand Arab engineers and technicians are employed in Israeli hi-tech companies. “But that is still not enough,” the president declared.Too many companies are still family concerns run based on socioeconomic considerations rather than focusing on the abilities of applicants for jobs, he said.Rivlin stressed the need for combined efforts to ensure that Israel maintains its edge in technological innovation.“It is our joint responsibility,” he said.Among the other speakers was Prof. Hossem Haick of Haifa’s Technion–Israel Institute of Technology, a scientist and engineer who invented the Electronic Nose used for sniffing out diseases and biomedic markers, thereby enabling early detection and cures for illnesses that could be fatal if diagnosed at a later stage.Shimon Peres after having read about this invention was intensely curious about it, Haick said. Peres had posed very tough questions in such a manner that Haick sometimes felt more like the student than the teacher due to Peres’s grasp of the subject.Chemi Peres said that his father had been so impressed with Haick, that his big dream for him had been that he should be the first Israeli Arab to win a Nobel Prize.Digital health-care entrepreneur Jonathan Adiri, who had served as chief technology adviser to Peres during the latter’s presidency, said that the first time they met, on his first day on the job, he had presented himself in Peres’s office at 7.30 a.m.Adiri had been full of awe.Detecting this, Peres rose from his desk, went over to the library, selected a book and gave it to Adiri saying that if he read the book, he would have a good understanding of Peres’s vision. “A leader who doesn’t understand technology betrays his people,” Peres had told him at the time.CISCO Systems executive chairman John Chambers shared an anecdote about Peres getting very excited when he visited Chambers’s home in the US and learned that he had an electric car.Peres asked if he could drive it. The affable Chambers, who had a 20-year friendship with Peres, instantly gave permission, and then someone whispered, “He hasn’t got a license.”