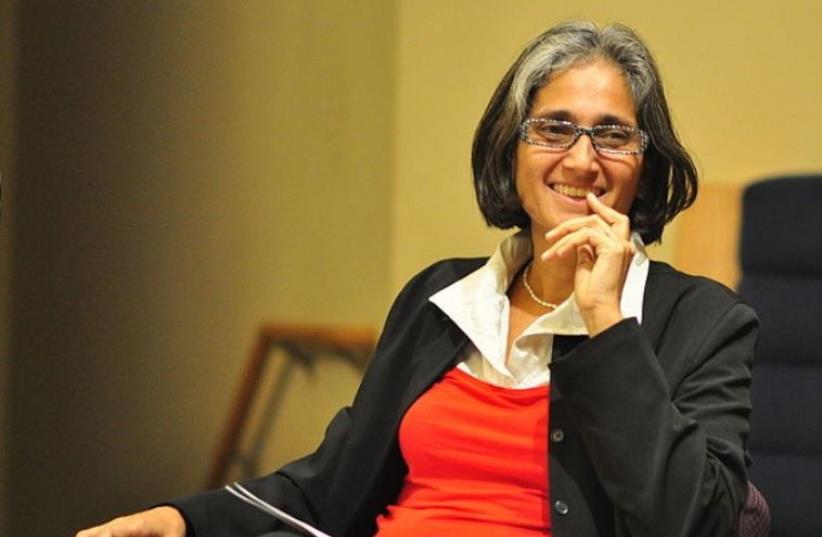 Sharon Abraham-Weiss, executive director of ACRI, 2015
(photo credit: JOE MABEL/WIKIMEDIA COMMONS)
Advertisement
The Association for Civil Rights in Israel (ACRI) announced on Sunday it submitted a petition to the Administrative Court in Jerusalem calling to compel the Israel Land Authority to penalize the real estate company Bemuna over the “discriminatory marketing” of its Karmei Gat project, a prestigious neighborhood north of Kiryat Gat.The petition follows massive public backlash over a promotional video released last week by Bemuna, catering to the national-religious public, positioning the new housing project in Karmei Gat as intended for Israelis of Ashkenazi descent, and ridiculing Jews of eastern origin.The real estate company won the government tender for the housing project in Karmei Gat, which according to its website is the country’s largest project since the establishment of Modi’in in 1985. Located about 35 minutes from Tel Aviv, it is set to include some 7,500 housing units.The project is being built in collaboration with the government, which according to Bemuna, will provide the infrastructure, including schools, public buildings, parks and roads, by the time residents receive the keys to their new homes.In the petition, ACRI stated that the ILA is obligated to ensure that public lands are equally accessible to all citizens, and the tender conditions reflected that obligation, which Bemuna violated.“Segregation and homogeneity in housing are common in the rural sector, and we have recently witnessed a rising trend in cities that are typically heterogeneous. This is a worrisome phenomenon. Just as ACRI opposed secular-only communities and kibbutzim that screen applicants via acceptance committees, we likewise oppose attempts to create communities that exclude anyone who is not national-religious,” said attorney Gil Gan-Mor, director of the ACRI Social and Economic Rights Unit, who submitted the petition.The potential penalties set in the tender, according to ACRI, include a fine amounting to 15 percent of income, and even the possibility of annulling the company’s winning bid.Following the petition, Justice Nava Ben-Or ruled that the State Attorney must respond and notify the court by December 10 whether it will rescind Bemuna’s winning bid.Last week Deputy Attorney- General Erez Kaminitz penned a letter to the ILA to examine the alleged discrimination by Bemuna and report back on its findings “as soon as possible.”According to ACRI, it had foreseen Bemuna’s “discriminatory marketing” and had already warned the ILA about it several months ago, well ahead of the controversial video, but the ILA had opted at the time to ignore the issue so as not to delay the tender.“Each person has a right to choose his place of residence, yet the State may not legitimize segregation imposed by strong groups that wish to reside only with those who resemble them, while excluding other citizens from lands that are meant for all. We therefore expect the State to act decisively against discriminatory marketing of apartments built on state lands,” said Gan-Mor.