During his visit to France, President Herzog will participate in a memorial ceremony for the terror attack at a Jewish school in Toulouse.

On Saturday, Herzog published a column in the French Le Monde newspaper, titled "The fight against antisemitism must come above all, from a feeling of brotherhood"

President Herzog opened the column with the names of the four Jews who were killed at the Toulouse school ten years ago: "Myriam. Arié. Gabriel. Jonathan. Four names that I have been unable to get out of my head since 19 March, 2012, when a depraved murderer stormed the Ozar HaTorah school in Toulouse and killed these four innocent people. Myriam was only eight years old. Arié was only five. Gabriel was only three. Jonathan was killed shielding his sons," Herzog wrote.

"I will never forget standing over their graves as they were laid to rest in Jerusalem: three young victims and the brave father who died trying to save them. Innocent victims of hate."

Herzog asked "I keep asking myself in astonishment: how could such a horror unfold on the soil of modern France?" and wrote that "France is one of the State of Israel’s closest allies and a country that has been a warm and wonderful home for Jews. This great Republic has proven its commitment to tolerance and fighting dangerous extremism. But unfortunately, the Toulouse massacre was not an isolated incident of radical violence committed by the fundamentalist fringes." 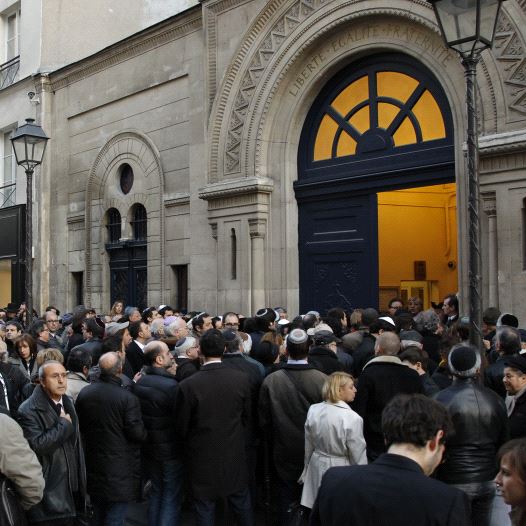 People gather outside the Notre-Dame de Nazareth synagogue in Paris March 19, 2012 to pay tribute to the four victims killed by a gunman at a Jewish school in Toulouse (credit: REUTERS)

He also mentioned the names of other French Jews who were killed for antisemitic reasons such as Ilan Halimi, ("who was abducted in Paris and brutally tortured to death in 2006"), Sarah Halimi  ("who was viciously beaten by an intruder in her Paris apartment and cruelly thrown out of the window in 2017") and Mireille Knoll (the 85-year-old Holocaust survivor who only one year later was stabbed to death at her home in the 11th arrondissement.")

"These were not medieval massacres. They were viciously antisemitic attacks, performed with unimaginable cruelty, right now in the twenty-first century" he wrote, and added that "Here, in the home of the Enlightenment, in the land that inspired the world’s love of reason, side-by-side and in one voice with leaders past and present of this great country, I want to state clearly: there is no reason for blind hatred. None."

Herzog mentioned President Macron and other French leaders for their work of combating antisemitism in France. "I commend President Macron for speaking and acting so forcefully against this terrible evil and making it clear that antisemitism has no place in France. I salute him for making the fight against antisemitism one of France’s major priorities for its Presidency of the Council of the European Union and for his commitment that France must show the way in this noble battle."

He said that "In the name of liberty, Jews must be able to live freely and without fear. In the name of equality, Jews must enjoy an equal sense of security as everyone else. But I believe that the fight against antisemitism must come chiefly from a place of fraternity—from a sense of solidarity rooted in our common humanity," Herzog wrote.

Herzog ended his column by asking to promote peace in the Middle East, "New winds of fraternity are blowing in the Middle East with the breakthrough of the Abraham Accords, winds of tolerance and understanding between Jews, Muslims, and Christians. The same winds of fraternity must inspire our common resolve to fight hatred and antisemitism, wherever they come from. I want little children around the world to see images of the President of the Jewish state shaking hands with the leaders of Muslim countries, Christian lands, and secular republics and to be inspired to take the path of peace and tolerance, and to reject the dangerous voices that would call them to violence and irrational prejudice."