A dozen Druze children who lost a parent serving in the IDF gathered together to join the Otzma camp, organized by the IDF Widows and Orphans organization.

A dozen Druze children who lost a parent serving in the Israeli security forces gathered for a remarkable three-day camp where they shared stories of bereavement and experienced new adventures.

The Otzma “Strength” camp is organized by the IDF Widows and Orphans (IDFWO) organization that takes place in Shlomi for teenagers, where they go on various activities including teamwork activities, extreme sports and more in the north of the country.

The campers, aged 7-18, also shared their stories of bereavement and held discussions about the different identities that make up the bereaved families in Israel and their place in it.

Otzma camps are held by the organization for IDF orphans aged 6-18 four times a year during the holidays of Sukkot, Hanukkah and Passover as well as during summer break.

According to the IDFWO website, not only do the camps provide the youth with environments where they can overcome loss and tragedy alongside others who have similar stories, but “the camps provide children with four to five fun-filled days, and give their mothers, the widows, a well-deserved break, knowing that their children are happy and thriving.” 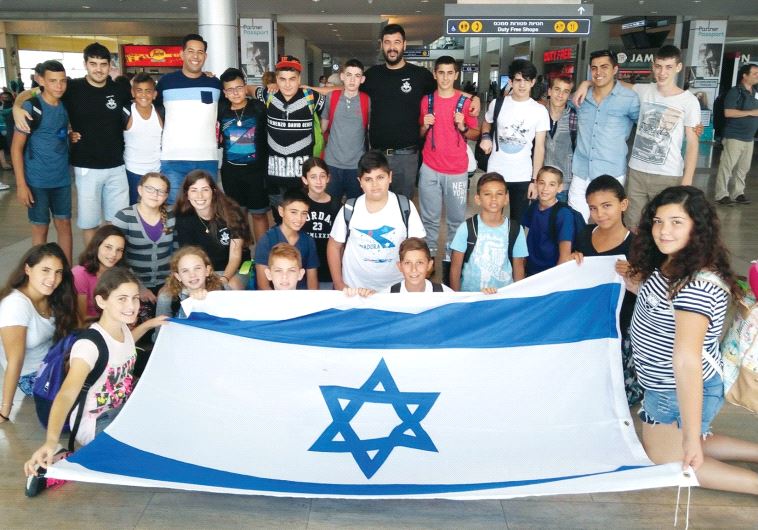 Are the Druze kids missing out?

WASEM SHEIBEL, who has been volunteering with IDFWO since 2013, started the camp for Druze children after he understood that the community was missing out since most camps take place during Jewish holidays – which don’t always fall on days when they have a vacation from school.

“I decided to do something for Druze orphans during their holidays,” Sheibel told The Jerusalem Post. “I started these camps in 2018, and they happen twice a year.”

This year, eighteen Druze kids took part in the camp. They visited firefighting stations, had tours of villages to learn about the connections of the three religions in Israel (Judaism, Christianity and Islam) and also went to an extreme park in Acco where they participated in a range of activities.

“They broke barriers and overcame their fears while supporting each other shoulder-to-shoulder,” Sheibel said.

On the last day of the three-day camp, the campers watched the sunrise over the Keshet Cave before they rappelled down.

Like the children in the camp, Sheibel also lost his father to terror when he was just nine months old.

While some of the mothers are initially worried if it’s their first time sending their child to the camp, in the end they see that their children are “surrounded by support and love,” the camp promoter said.

“The kids get a second home here, and they see that all the kids have the same issues and feel the same hurt – and that they can talk to other kids about their feelings and return home with a smile,” he said. “And that’s our mission: to give the kids someone else to speak to who understands them, to open their hearts when they are unable to speak to their parents. When they see there are other kids with the same feelings and hurt, they can open up.”

Who are some of the campers?

SHADAN KHNIFEF lost her father when she was just three years old and has been taking part in the camp since 2019. She went this year with her brother who was only a year old when their father was killed by terrorists.

The 17-year-old said that although she missed her mother while at the camp, “to meet the other teenagers twice a year, it’s really a great feeling. It’s wonderful to meet new friends and I wait all year for this camp.”

Her mother, she added “was always sending me messages and asking how we were. But she gave us the space we needed and that’s really great because we were with our friends.”

Knifef said that the best part of the camp was watching the sunrise at Keshet Cave in northern Israel.

“We all waited together, and even though it was cold, we were all together. It was really emotional,” she said. And while it’s only three days long, “these are really the best days of the entire year. All my friends are here.”

RINAL SAIF lost her husband Zidan in 2014 in a gunfight with terrorists at a Jerusalem synagogue.

He was the first officer on the scene of the attack in Har Nof, where two Palestinians from east Jerusalem, armed with a gun and cleavers, had already killed four worshipers. The 30-year-old was shot in the head during the shootout and later died in hospital from his wounds.

Zidan and Rinal had a four-month-old daughter at the time of the attack. This year was her first time attending the camp.

“I never thought that at such a young age, eight years old, that I’d let her [go] alone to such a camp,” her mother told the Post. “But after I showed it to her on Facebook, she was stubborn and wanted to go.”

Rinal said that after her daughter returned from the camp, she was full of smiles and told her that she wanted to go again.

“Even if we do everything for her, she always has tears in her eyes. But this time, when she came home, she was smiling with tears of joy,” her mother said. “She told me of the experiences of being with other kids who lifted her up. I asked her if she wanted to go again, and she showed me the pictures and her experiences and she wanted to go back again.”

While she didn’t let her daughter attend the camp last year, “this year I decided to trust her to go alone to the camp. She didn’t know anyone, only Wasem, but she really connected to the other kids… almost as if she knew them her entire life.”

For Wasem, it was emotional for Rinal’s daughter to join the camp because he had served with her husband, Zidan.

“We served together and it was the first time that his daughter went to the camp,” he said. “We were all together and I saw that the older girls came to her and hugged and took care of her. You can see how everyone supports and worries about everyone’s happiness.”

Rinal explained that Wasem told her about the camp and answered all of her questions. She knows some of the other mothers who have sent their children to the camp. “We went through the same situation… we are always together.”

Wasem, she said, “is a great man. I trust him. He worries about my daughter like he’s her father.”