The former foreign minister warned of a growing phenomenon of attacks by Jewish Israelis against soldiers after a female soldier was attacked in Hebron over the weekend. 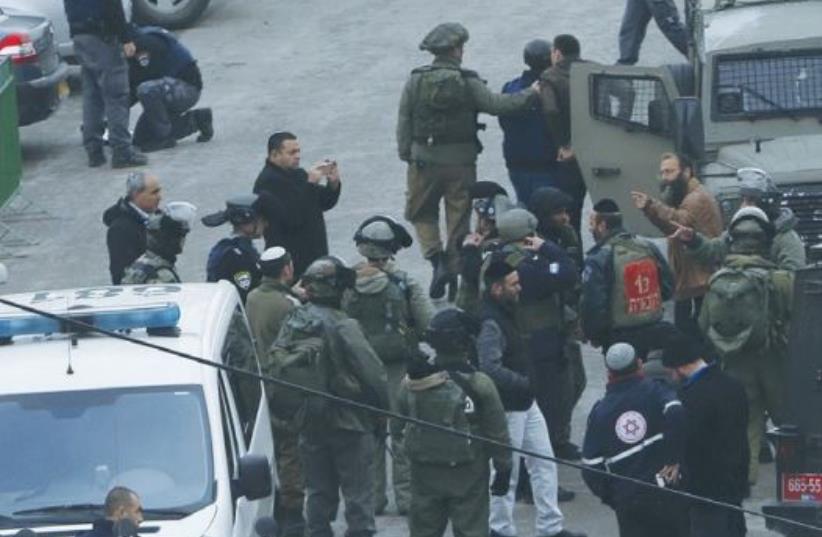 The Shabbat attack on a female soldier by a Jewish Israeli in Hebron continued to make waves on Sunday.

Former foreign minister Tzipi Livni warned of a growing phenomenon of attacks by Jewish Israelis against soldiers and cautioned it could spread unless dealt with.

The soldier, a resident of Hebron who serves in the military’s Judea Regional Brigade, was injured during violent altercations over Shabbat in the historic city, divided between Israelis and Palestinians. The soldier was attacked during a confrontation between Israeli worshipers and Palestinians at the entrance to the tomb of Otniel Ben Knaz, the first biblical judge of Israel.

The confrontation developed during a planned entrance of the Jewish visitors to the tomb, during which Israeli citizens began to riot, throwing sharp objects and stones, leading to Palestinians responding in kind.

A female Israeli soldier guards near the Jewish settlement of Otniel in the West Bank (credit: REUTERS)

Israeli security forces worked to disperse the two sides and bring the scene back under control, at which point a member of the Israeli crowd attacked a soldier with a stick.

The injured soldier received medical treatment at the scene before being evacuated for further treatment.

Who was the attacker?

On Sunday, the soldier filed a complaint against the attacker, who had yet to be detained. According to members of the Hebron community, he was not a resident but visited along with thousands of others to celebrate the Torah portion of Chayei Sarah, which describes Abraham buying the Cave of the Patriarchs and the adjoining field as a burial place for his wife Sarah.

The soldier’s mother told KAN radio that the man attacked her daughter  “for no reason; she was not involved in anything.”

“They beat her because she was in IDF uniform, not because she did something. These are not people from the settlement. We are talking about youth who came to stir things up. This is a minority,” she added.

The father of the female soldier told Channel 12 that the attacker was drunk.

“The vast majority of the guests on Shabbat, as well as all the Jewish residents of Hebron, love the IDF and admire the work of the soldiers,” he said.