Thieves broke into a base and stole two vehicles and the soldiers didn't even notice.

Unknown thieves broke into the artillery corps' Shivta base in the Negev during the weekend and stole an expensive motorcycle and a quadbike that had recently been confiscated by the police, Walla learned on Sunday.

The incident came to light after IDF soldiers patrolling the base found a gaping hole in the fence and sounded the alarm. After searching the area they found that the robbers cut the fence, entered the vehicle area of the base on foot and stole vehicles that had been confiscated on suspicion of being connected to illegal activity in the area.

A military source stated that the soldiers in the base didn't even notice the break-in. In case the thieves would have been terrorists, they could easily have reached the soldier's living quarters. "This isn't the first time weapons are being stolen from this base. Last year there were a couple of incidents where members of a minority group stole weapons, military equipment and ammunition from there," he said.

Another source contradicted this statement, stating that "the last break-in happened three years ago and most of the other stealings happened in shooting ranges and not in the base itself. These vehicles were civilian and were confiscated in a joint IDF-Israel Police operation."

The IDF Spokesperson's Unit said: "During a routine patrol securing an IDF base in the south of the country yesterday, IDF soldiers noticed a big gap that was cut into the fence of the base. After the area was scanned extensively it was found that a motorbike and a quadbike, which were confiscated in the last weeks by the police, were taken from the base. The vehicles were standing near the fence when they were dragged out so the suspects didn't penetrate far into the base. IDF forces are widely searching for the suspects." 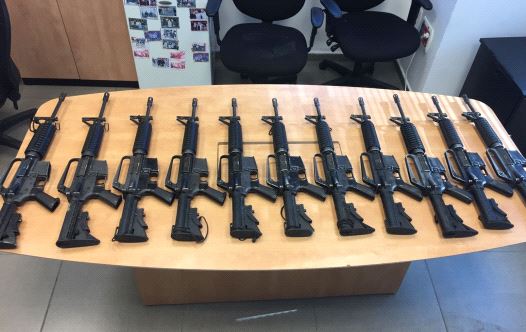 Retrieved weapons stolen from an IDF base in southern Israel (credit: ISRAEL POLICE)

Thefts in the Golan Heights

Last November 70 thousand bullet rounds and 70 grenades were stolen from Tznobar base in the Golan Heights. Commander of the IDF's Northern Command, General Uri Gordin visited the base and was shown the results of a preliminary investigation, which explained that the thieves exploited a weak point in the army base's security in order to steal the ammunition. The base is being secured by different units training in the Golan Heights and the failure happened during the shift change between units.

The investigation further showed that there were disparities in the security system of the base, a lot of false alarms and a lacking response in the ammunition storage area.

After the investigation concluded, General Goldin ordered several immediate steps to be taken, including security training in all units under the Northern Command and another special situational assessment discussing the security of the bases. The investigation's findings will be presented to Goldin within a month.

During the last two years, the IDF invested 50 million shekels in the security of its bases that have stores of weapons and ammunition. General Gordin instituted an expert panel to probe the operational failures and which, according to sources in the Northern Command - could even fire commanders for their failures.

According to information IDF Chief of Staff Kohavi received, there were 15 intelligence warnings about intentions to break into IDF bases and steal ammunition and weapons. Israel Police and Shin Bet helped in the gathering of information.