We wouldn't bet on an airport cab in Israel, and neither should you

Walla News conducted an investigation into the messy taxi situation at Ben-Gurion Airport, and the results may not be to your liking.

By UDI ETZION/WALLA!
Taxis at the Ben Gurion Airport outside of Tel Aviv on August 7, 2018
(photo credit: TOMER NEUBERG/FLASH90)
Advertisement

Anyone who has landed at Israel's Ben-Gurion Airport in recent years has had to encounter taxi drivers who sneak up on passengers in the Arrivals Hall.

Those who need public transportation, especially on weekends, encounter a thin line of taxi drivers in the official queue. However, again and again stories arise about drivers who picked up tourists from the airport and charged them exorbitant prices, hundreds of percent higher than the meter prices.

This is despite the fact that taxis are the main means of transportation for people flying in. According to data from the Airports Authority, for example, 40% of departing passengers leave the passengers in what amounts to 1.7 million taxi rides per year.

On weekdays, taxis are faced with competition, such as the train, buses and "share route" taxis, but from Friday afternoon to Saturday night, taxis are the only option.

The Airports Authority announced a tender for the operation of taxis at the airport in an official statement in December to try and improve the level of taxi service and to put an end to the excessive mess – even on Israeli terms. 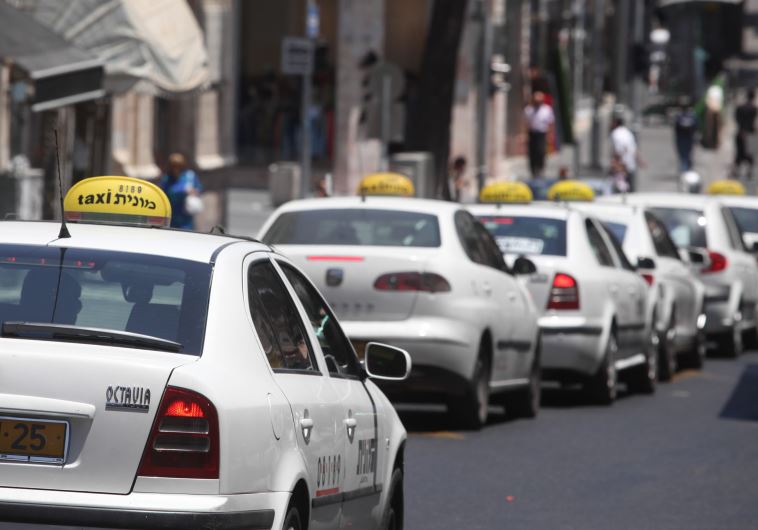 A former tender from 2017, won dually by GETT and Hadar Lod taxis, has not seemed to work.

The contestants in the new taxi tender have until January 25th to submit their bids, and the Authority hopes that by the next expected flight peak during Passover, the new arrangement will already be in operation at the airport, provided that the losers in the tender do not resort to legal proceedings.

The winner of the tender will receive a new building established by the Airports Authority at its disposal for the duration of the tender. This can be used by the ushers to manage activity and as a waiting and resting area for drivers.

In addition, the Airports Authority has seemingly learned from the failures of the previous tender, which infuriated taxi drivers due to the commitment encouraged by the tender to a large discount from the standard price. This time, there's no required discount.

The Authority even boasted that it has reserved a budget of NIS 6.3 million to subsidize the organizational actions that the winner would need to take on, as well as nine employees, 364 days a year.

"Our goal is not to make a profit from taxi operations, but to ensure an available and supervised service for passengers who need it," an official at the Airports Authority told Walla News.

What do the potential contestants think?

GETT has yet to decide if it will compete, but Yango already announced that it will.

"We are happy that in the tender a significant emphasis is placed on the technological aspect because it is the aspect that enables availability and good service for both drivers and passengers," Yango said following the announcement of the company's participation in the tender. "The tender also fits well with our vision because the solution for efficient public transportation must combine solutions for mass transportation alongside individual solutions such as a taxi, and everything must work with the technological back-up that can optimize the process."

Uber, which returned to the Israeli market last year as a taxi service provider, said that "the company is looking into the tender" in the meantime.

What happened on the tour of the bidders at the airport?

At the bidders' tour conducted in the beginning of January by the Airports Authority, however, overwhelming cries of complaint and anger were heard.

Sharp criticism was heard in the tour against the demand in the tender that a passenger should not wait more than 12 minutes for a taxi. The Authority said that if three complaints per month are found to be justified, it will lead to a fine of NIS 10,000 for the companies that win the tender, while between four and seven complaints would cost NIS 20,000 and 9-10 complaints would come to NIS 30,000.

The companies may also be fined if their drivers do not activate the fare meter or if they run amok in the airport. However, there's no real enforcement towards drivers at the airport today.

Representatives of the Airports Authority promised that once the new taxi operator companies begin to work at Ben-Gurion Airport, they will allocate five police officers to enforce the law upon the drivers. Participants of the tour, however, stated that this does not appear in the tender as a written and binding promise.

"Today, apps and taxi stations have almost no authority vis-à-vis drivers, imposing fines on them because of their behavior will be nothing more than a source of income for the authority," a source familiar with the situation told Walla.

The representatives of the stations were surprised at the requirement that every taxi carry a special rooftop attachment for luggage. They pointed at the long line of taxis waiting outside the Arrivals Hall, only one of which actually had the attachment.

"Since the Transportation Ministry canceled the baggage fee (which charged passengers extra per luggage), most of the drivers who still had a roof attachment installed removed it," one participant of the tour said. "A rooftop attachment increases fuel consumption, creates a noise nuisance, and now there is not even any income from it."

The participants were also surprised by another requirement: that the winning companies make sure that their drivers do not have a criminal record. This is because the law does not generally allow them to ask the drivers about it.

Another requirement that arouses serious controversy is that drivers who are not from the winning companies who receive ride requests to the airport must transfer the details of the ride order to the companies that did win.

"Can you imagine a situation where one taxi app would transfer such details to another?" said another attendee of the airport tour. "At every major airport in the world, information about the arrival of a taxi to the airport complex is transmitted via cellular to the operating software, in order to know the size of the vehicle available for travel. Over Bluetooth, this can only be done when the taxi reaches the front gates of the airport."

It is also unclear whether GETT or Uber will agree to transfer information to Yango, which is owned by the Russian Yandex, which in turn is obliged by Russian law to keep all the information it possesses in Russia, accessible to the government.

When it was revealed in Israel that the Shin Bet and the Mossad prohibited their employees from using the application, Yango stated that the information in its possession is not available to any government, other than through a legal application through Interpol.

Another problem is the authorization fee that the Authority demands from the tender winners. While this is common practice worldwide in similar tenders, Israeli drivers, apps and taxi stations do not have the ability to transfer part of their incomes to the Authority with the current taxi rates.

Even today, taxi drivers who receive an order for a ride to the airport call the passengers to demand a higher payment, regardless of what the fare meter says, and if the passenger refuses, the driver cancels the trip.

"On the one hand, even after canceling the driver's payment for luggage, the state did not cancel their obligation to collect 5 shekels from passengers at the airport and transfer it to the Airports Authority, which enjoys millions of shekels per year as a result," said one official close to the matter. "On the other hand, the authorization fees that the winners of the tender are required to pay will roll onto the drivers who cannot charge the passengers for such an extra payment. If a driver has to pay the application 10, 15 or 20 shekels as an authorization fee, how many drivers will come to work at the airport?"

When the participants in the tour raised the issue of the low meter rates, the Airports Authority representatives suggested they contact the Transportation Ministry with the demand that they raise meter rates.

One participant in the tour summarized the situation perfectly: That it feels as though the Airports Authority is looking for a company to drop the responsibility of the taxi problem at the airport onto, but cannot really guarantee good conditions for passengers at the same time.