Israeli police recommend bribery charges against Netanyahu, February 13, 2018 (Reuters)
Advertisement
Fifty-nine percent of the public believe the criminal investigations of Prime Minister Benjamin Netanyahu damage his ability to run the country and handle security crises like Saturday’s incident on the Syrian border, according to a Smith Research poll taken for The Jerusalem Post.

Only 32% of the 556 respondents representing a statistical sample of the population said the investigations did not harm Netanyahu’s functioning in the poll, which was taken on Wednesday, a day after the police announced its recommendation to indict the prime minister for bribery. Nine percent had no opinion. 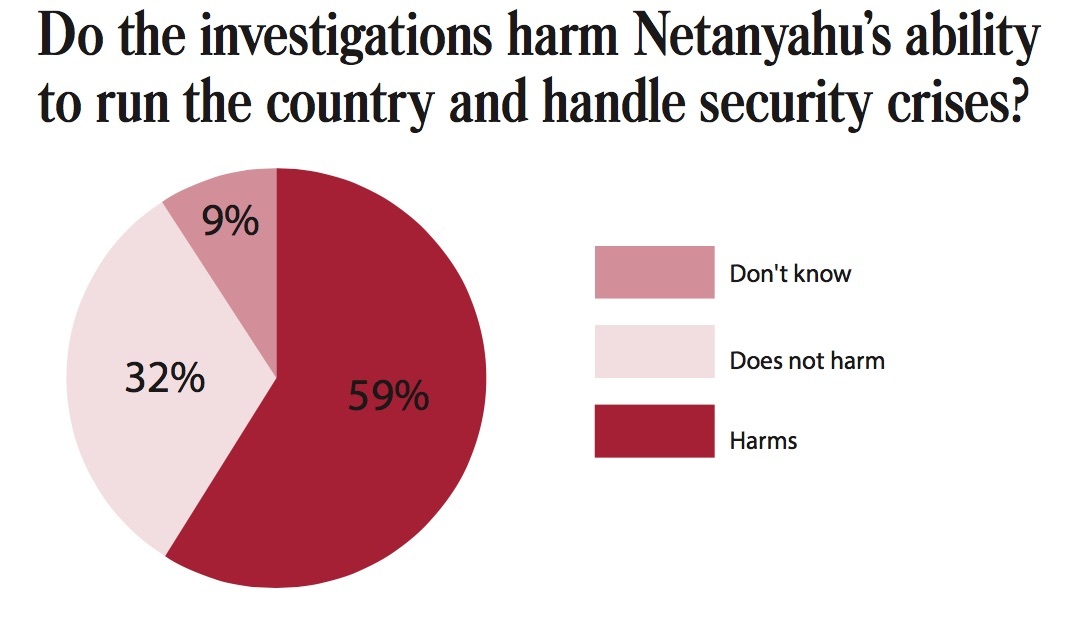 But among Likud voters, 55% said Netanyahu’s functioning has not been harmed and only 35% said they believed it was damaged. Ninety percent of Zionist Union voters and 80% of Yesh Atid voters thought the prime minister’s ability to run the country was harmed.When asked whether Netanyahu is corrupt, 48% of the respondents said yes, including 28% who said he was very corrupt and 20% who deemed him somewhat corrupt. Twenty-two percent said he was not corrupt at all and 19% said he was not very corrupt. Eleven percent had no opinion. 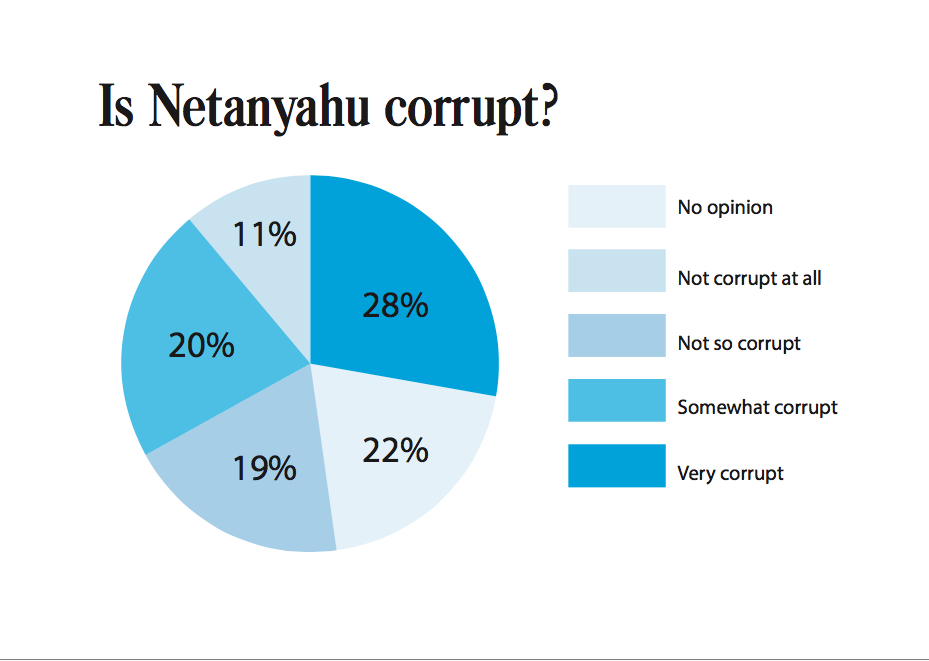 Among those who voted Likud in the last election in March 2015, 77% said Netanyahu was not corrupt and only 8% said he was. Similarly, 73% of Orthodox respondents deemed Netanyahu not corrupt and only 11% said he was corrupt.But 67% of secular Jewish respondents called the prime minister corrupt, as did 91% of Zionist Union voters, 76% of those who voted Yesh Atid, and 70% of those who voted for Finance Minister Moshe Kahlon’s Kulanu party.When the pollsters asked respondents what Netanyahu should do in the wake of the police recommendations, 47% said he should either quit or suspend himself, 43% said he should continue in his job, and 10% had no opinion. 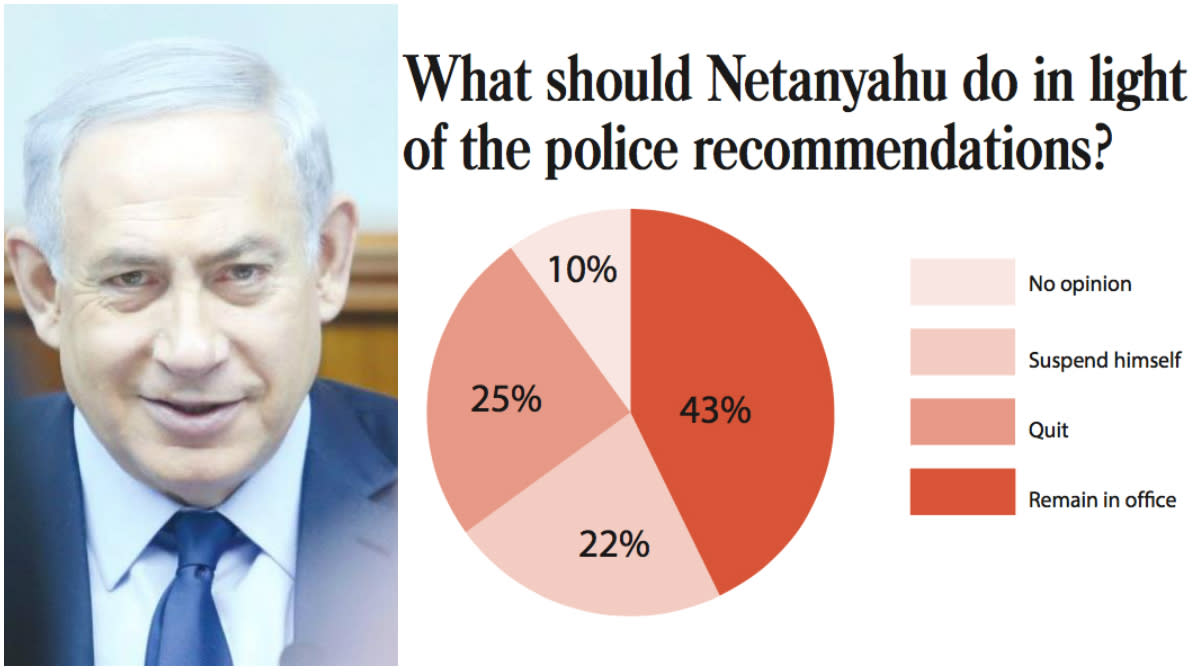 Nearly half the respondents said the police recommendation would weaken Netanyahu politically, and just 13% said it would strengthen him. Even among Likud voters, 35% said the police’s decision would weaken him and 20% said it would strengthen him.Nevertheless, the poll indicated Netanyahu’s Likud had gotten stronger following the recommendation, and that the Yesh Atid party of the police’s key witness, Yair Lapid, had been weakened. The poll predicted 28 Knesset seats for the Likud, the strongest result for the party in Smith Research’s polls in more than a year, but still down from its current 30 mandates.Yesh Atid would win 22 seats if an election were held now (up from its current 11), according to the survey. The Zionist Union would win 15 (down from its current 24), the Joint List 12, Bayit Yehudi 11, and Kulanu, Yisrael Beytenu and United Torah Judaism would each win seven mandates. Meretz and Shas closed out the poll with six and five seats. 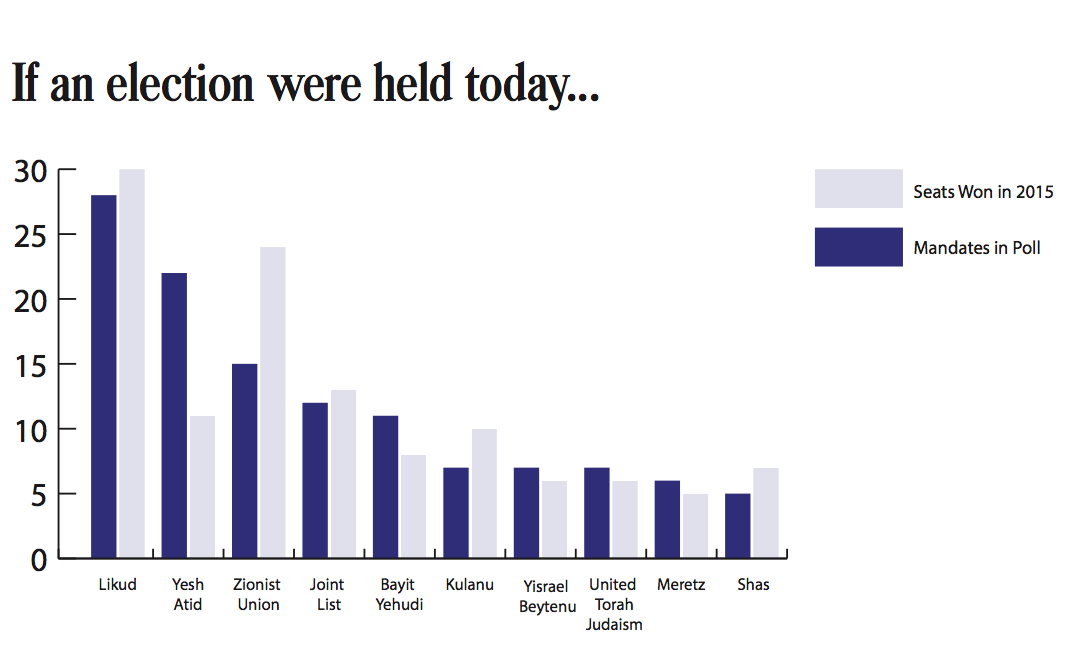 A plurality of respondents said Kahlon did not have to quit the coalition, with 43% saying he did, 26% saying he didn’t, and 31% had no opinion. Among Kulanu voters, 50% said party chairman Kahlon did not have to quit and 20% said he did.If Netanyahu did have to resign due to the corruption charges, 29% of respondents said former minister Gideon Sa’ar should replace him among the Likud candidates. Fourteen percent preferred Transportation Minister Israel Katz, 8% Public Security Minister Gilad Erdan, 3% Regional Cooperation Minister Tzachi Hanegbi, and 46% said none of the above. 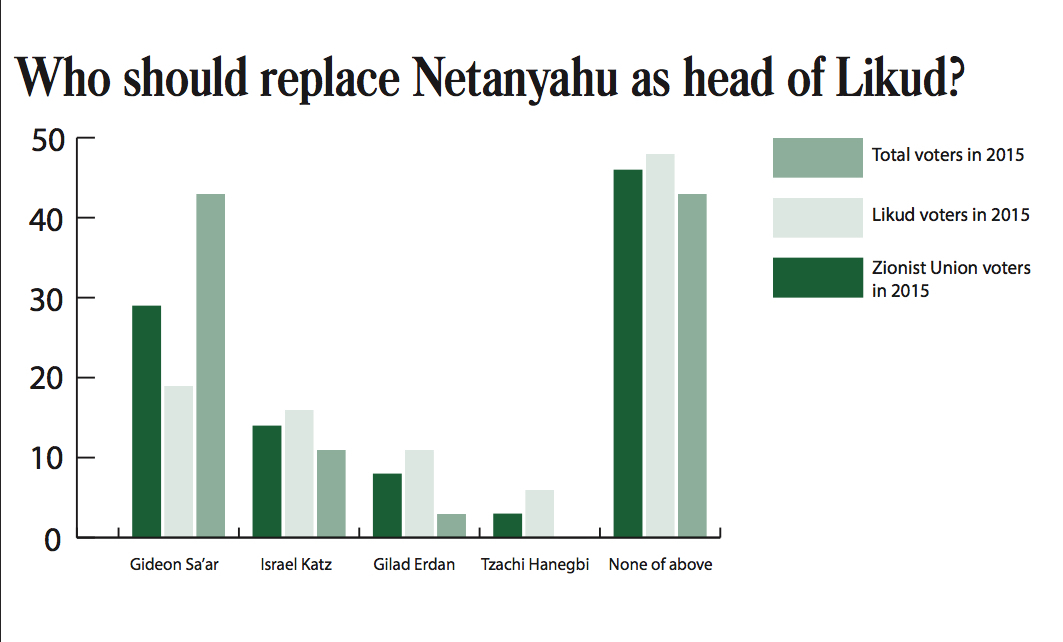 In the event that Netanyahu would suspend himself and would be replaced by another minister, 13% said they preferred Education Minister and Bayit Yehudi chairman Naftali Bennett, 10% Defense Minister and Yisrael Beytenu chairman Avigdor Liberman, 10% Kahlon, 9% Katz, 8% Erdan, 6% Knesset Speaker Yuli Edelstein, 1% Hanegbi, and 43% said none of the above. 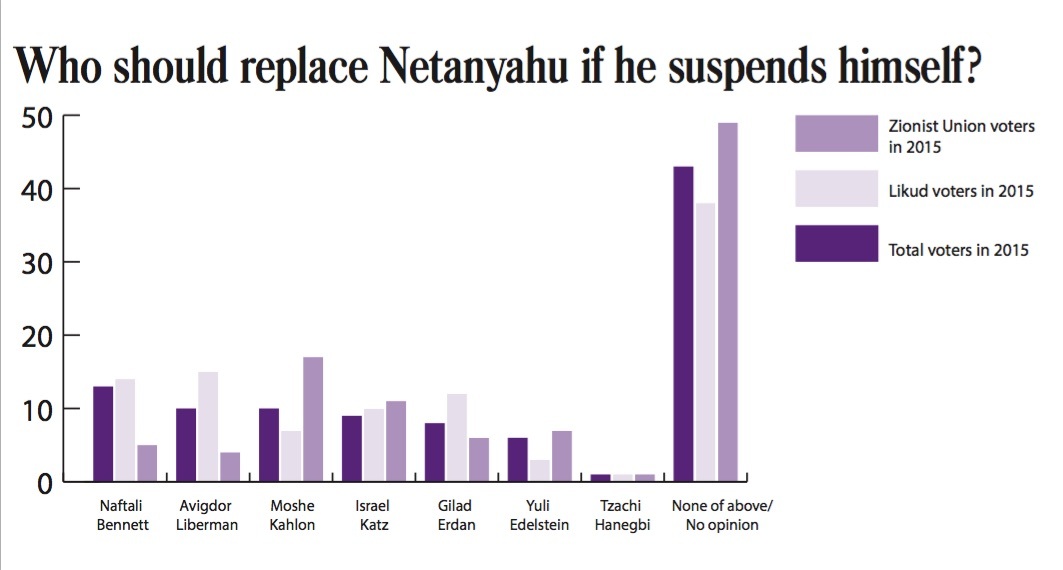