Earlier this summer, the Prime Minister went on a historical visit to Africa, the first by a sitting Israeli Prime minister in 29 years. 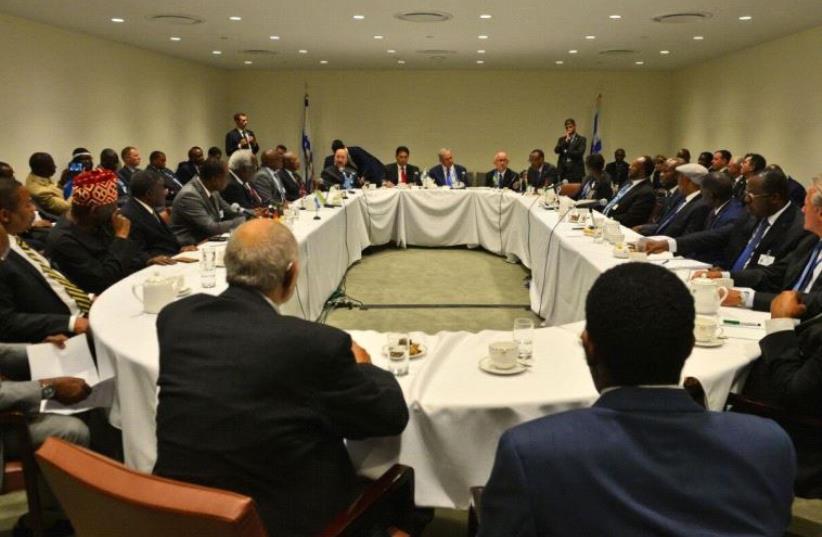 Prime Minister Netahyahu, Ambassador Danon and leaders from African countries and the developing world.
(photo credit: SHAHAR AZRAN)
Advertisement
NEW YORK - Prime Minister Benjamin Netanyahu met with African leaders on Thursday on the sidelines of the United Nations General Assembly to discuss Israeli innovations in Africa and developing countries.“Africa excites our imagination,” he told the leaders. “We would like to propose a friendship and a partnership with every one of your countries.”After the closed meeting, the Prime Minister and Israel’s UN Ambassador Danny Danon held an event to present the latest Israeli technological developments to heads of states from Africa and developing countries.Dozens of ambassadors, senior UN officials and representatives from the private sector also took part in the event, during which Israeli companies presented their innovations one by one.One of them was Energyia Global Capital, which develops affordable solar projects worldwide, with the goal of providing clean electricity for 50 million people by 2020. The company had also launched East Africa’s first solar field in February 2015 in Rwanda.“There are 600 million people in Africa without electricity and another couple hundred million who are powered using dirty and expensive diesel,” Energyia Global Capital CEO Yosef Abramowitz said in his presentation. “Well, a new light is shining out of Zion.”Abramowitz chose to use the event at the UN to announce that his company is prepared to invest $2 billion in Africa for the next four years.“We have already signed deals to deploy $250 million into commercial solar energy fields in the next 12 months,” he added. “And we would like to do more.”Netanyahu told the audience he believes Israel can greatly contribute to Africa.
“Technology changes everything.  And technology is related to so many areas: to healthcare, agriculture, education, and so much more,” he told the forum, which also included many New York Jewish leaders We want to share our knowledge and technology with the world.”Earlier this summer, the Prime Minister went on a historical visit to Africa, the first by a sitting Israeli Prime minister in 29 years. He visited Kenya, Ethiopian, Rwanda and Uganda, where he attended a ceremony marking 40 years since the Entebbe raid, during which his brother Yoni Netanyahu was killed.