“All cultures see burying the dead as a commandment, and preventing a burial is an act of villainy. You are giving Jews a bad name.” 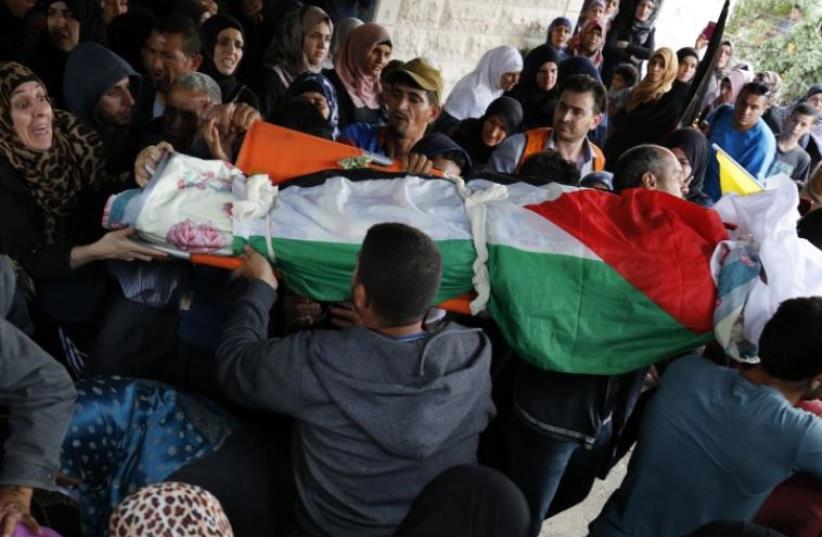 Palestinian mourners carry the bodies of Maram Abu Ismail, 23, and her brother Ibrahim Taha, 16, who were shot dead by Israeli police last month at the Qalandiya checkpoint
(photo credit: AFP PHOTO)
Advertisement
Legislation that would allow the police to keep terrorists’ bodies and condition their release on modest funerals instead of mass marches to mark their martyrdom is expected to go to a final vote on Wednesday.Under the bill, a district police commander could set conditions for a funeral, if there was a credible concern that holding a mass funeral would be a security risk or lead to an act of terrorism.The law applies to terrorists from sovereign Israel, including east Jerusalem but not the West Bank, where the army responds to terrorism. Thus far, the IDF has not seen a need to hold on to terrorists’ bodies to prevent mass funeral processions.However, the police began doing so after the wave of terrorism that began in October 2015, as a tool to respond to “severe disturbances of public order... that could lead to loss of life,” the bill’s explanatory portion states. However, in July 2017, the Supreme Court ruled that the police do not have the legal authority to delay returning bodies to terrorists’ families, which it ruled a necessary component of cases in which basic rights, such as human dignity, are violated.The bill – co-sponsored by Likud MK Anat Berko and MK Bezalel Smotrich of Bayit Yehudi – seeks to give the police that authority.On Tuesday, the Knesset Interior Committee authorized the bill for a second and third (final) reading.Berko, who has a PhD in criminology and specializes in Palestinian terrorism, said she wished the bill was not necessary.“In much of my research in my academic life, I found that the terrorists I interviewed remembered when they were enlisted in terrorist organizations during terrorists’ funerals. That was a turning point in their lives. Many young people are not given a choice during funerals and are pressured to enlist, become terrorists and then murder our citizens,” she said.Interior Committee chairman Yoav Kisch (Likud) said, “A terrorist’s funeral is not just a post on Facebook, it is a display of incitement and mass hatred that just creates more terrorist attacks and flames the incitement.Unless the family agrees to the police’s conditions for the funeral, he stated, “We can prevent such events by not returning the terrorist’s body.”When the bill passed a first reading in January, Joint List MK Jamal Zahalka said preventing someone’s burial was shameful.“All cultures see burying the dead as a commandment, and preventing a burial is an act of villainy. You are giving Jews a bad name,” he said.