The Education Ministry, Finance Ministry, Union of Local Authorities and others joined forces to advance a bill to regulate after school programs in Israel. 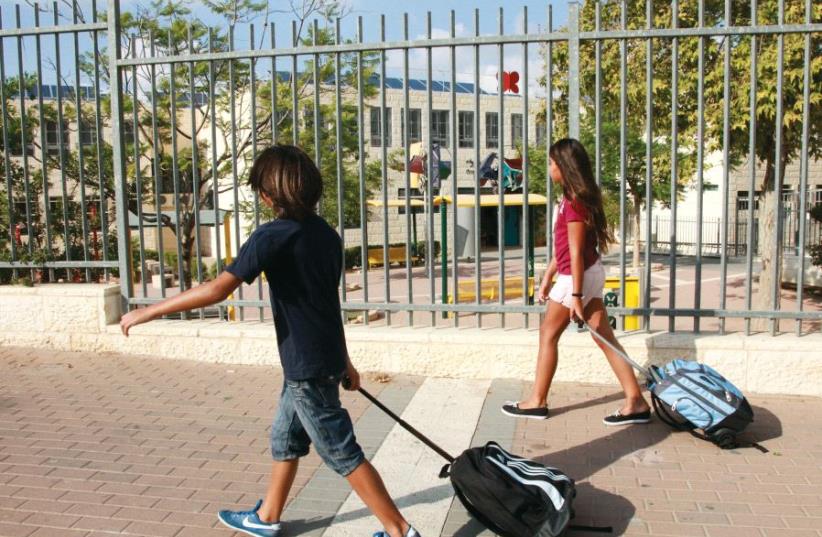 Children on their way to school
(photo credit: MARC ISRAEL SELLEM)
Advertisement
After-school programs for young children known as tzaharonim will be regulated for the first time, according to a bill advanced Sunday by the Ministerial Committee on Legislation.The bill, sponsored by MKs Ya’acov Margi (Shas) and Yifat Shasha-Biton (Kulanu) would set universal prices and a basket of services for the after-school programs, each of which would be limited to 35 children.The Education Ministry will be involved in setting standards for the programs and will be able to fine institutions that violate them or charge beyond the universal price that is set.“This is an important breakthrough for parents of young children,” said Margi.The Education Ministry, Finance Ministry, Union of Local Authorities, and Community Centers Association were partners in advancing the legislation.Several other key bills were delayed by the ministerial committee, including legislation that would enable parents to legally take off from work on the first day of school and a bill sponsored by Bayit Yehudi MK Bezalel Smotrich that would require the attorney- general to defend all of the government’s decisions.The committee voted against a bill that would have required repeat domestic-violence offenders who are deemed dangerous to wear electronic bracelets that will make where their location known.Yesh Atid MK Aliza Lavie, who initiated the bill, said that by rejecting the legislation the government was failing to protect women following a week in which four women were killed by violent husbands and partners.Knesset committees will deal in the week ahead with bills that would give party members a half day off from work to vote in party primaries and make it easier to detain people in administrative detention. The Knesset, on Tuesday, will pay tribute to Israeli music.