Ben Guzi, 17 years old, was rushed to the Kaplan Medical Center emergency room after nearly drowning while trying to catch a Pokemon. 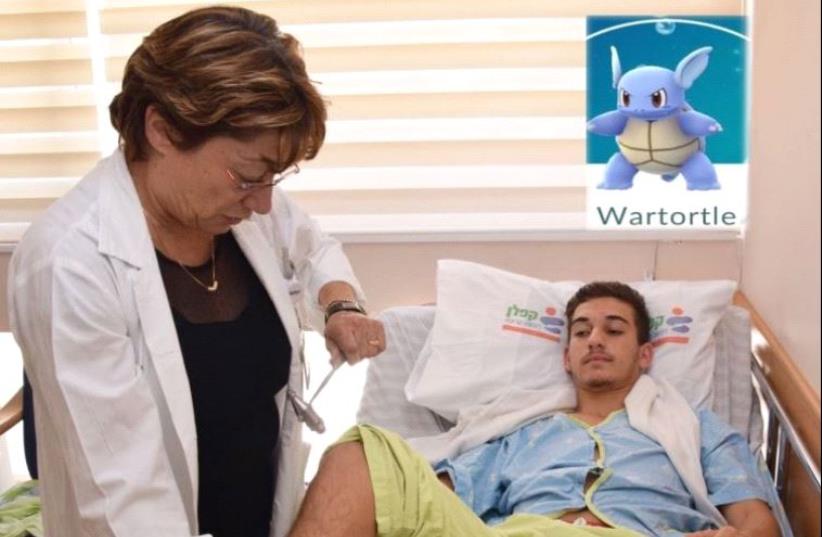 Assaf Ben Guzi is examined by Dr. Ronit Gilad, head of the Department of Neurology at Kaplan. Ben Guzi nearly drowned trying to catch a pokemon.
(photo credit: KAPLAN MEDICAL CENTER)
Advertisement
Kaplan Medical Center in Rehovot on Tuesday reported its first case of life-threatening incident involving the popular new "Pokemon Go" app. Ashdod resident Asaf Ben Guzi, 17, was rushed to the Kaplan Medical Center emergency room after nearly drowning while trying to catch a character in the game. He was pulled from the water by his brother, and was later hospitalized in the neurology department.Doctors warned that using the app by the sea is highly dangerous due to users' lack of awareness of the real world around them while playing.Since the app's debut, it has caused a number of accidents. In Baltimore, a man drove into an empty parked police car because he was searching for pokemon while driving. In Japan, players have been found wandering into busy highways while absorbed in the game.The IDF has banned Pokemon Go on all bases amid security concerns, as the app activates phone cameras and GPS sensors and could leak data.Pokemon Go is the joint effort of Niantic and Nintendo, the team's first mobile game release. The app utilizes augmented reality, adding a digital layer to the real world that can be viewed via smart phones. Already wildly successful, Pokemon Go has surpassed long-time download record holders Tinder and Twitter, and since the app's launch, the value of Nintendo shares has risen sharply. Although the game has not yet officially launched in Israel, swarms of users have found ways around the geographic restrictions in order to hunt throughout the Holy Land.