These extremist Jewish anarchists must be ostracized from our midst, as in their own warped way they are as great a threat to stability in this land as any Palestinian terrorist. 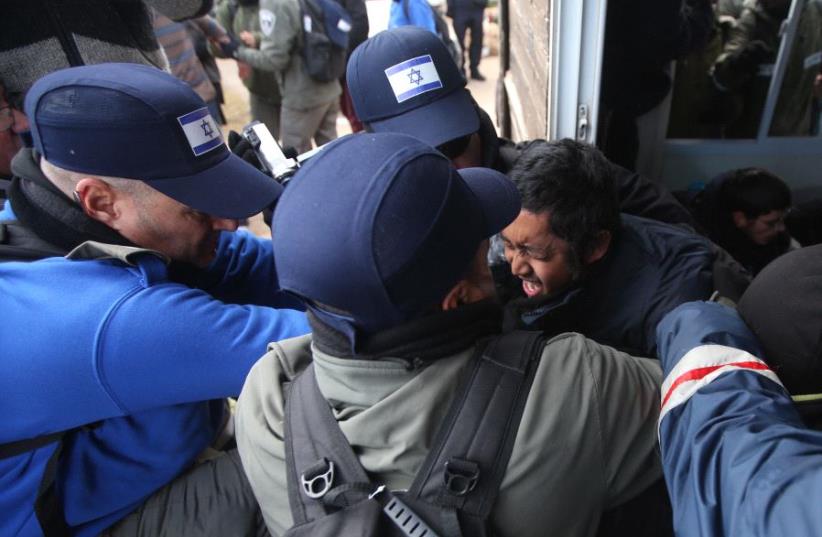 Evacuation of Amona
(photo credit: MARC ISRAEL SELLEM)
Advertisement
A lonely, hand-drawn banner with the words “The people love Amona” fluttered in the wind Thursday morning at the Ammunition Hill Light Rail Station in Jerusalem. But with their foul, thuggish actions during this week’s evacuation of the illegal West Bank outpost, the pro-Amona movement has lost whatever goodwill it may have harnessed with “the people.”It’s a sight we’ve become all too familiar with – security forces attempting to do their job are taunted, attacked and injured by who Public Security Minister Gilad Erdan rightfully called “deplorable hooligans.”This week’s evacuation brought back ominous memories of previous instances when, following a court or government decision, Israeli forces were forced to show incredible restraint against verbal and physical onslaught at the hands of their fellow countrymen – the 1982 withdrawal from and destruction of Yamit in Sinai, the 2005 withdrawal from and destruction of Gaza’s Gush Katif and the 2006 demolition of nine homes right there in Amona, on a hilltop in Ofra, that has served as a symbol of settler resistance since it was illegally established 21 years ago.Yes, the evacuations and demolitions are wrenching for the residents, who, regardless of reason they chose to be there (although it’s clear that politics reign supreme), deserve empathy for having to leave the homes they spent years cultivating.But the scenes which keep repeating themselves aren’t created in a vacuum. It’s the absurd government policy of allowing the fringes of the settlement movement to run wild, setting up outposts and flaunting the law, that is the culprit. It’s that policy, or non-policy, that keeps coming back to bite the country in the bottom.The price is huge – not just the monetary cost that numbered in the millions for evacuating Amona, but the risk of putting the police in danger by placing them in an impossible situation. It was sickening to watch the scenes of security personnel being doused with bleach, hit with iron bars and verbally abused by lawbreakers (most of whom weren’t even Amona residents but showed up on their own volition to cause trouble) who contribute nothing to Israeli society.Without even going into the discrepancies between the police kid-glove, no weapons policy at Amona and the full-frontal combat mode they displayed at the evacuation scene last month in the Beduin village Umm al-Hiran, it’s clear that the police showed extreme restraint, much more than they should have in light of the offenses committed against them.These extremist Jewish anarchists must be ostracized from our midst, as in their own warped way they are as great a threat to stability in this land as any force from the outside. No accommodation for the Palestinians – from a two-state solution to Naftali Bennett’s autonomy on steroids – will ever be acceptable to them, and they will do everything to sabotage any movement toward that eventuality.There should be blanket condemnation of their actions from all sides of the political spectrum, starting from the top. Only a hard line against agitators who would like to turn Israel into a theocracy, like some other countries in the region we rail against, will prevent the ugly scene of Israelis battling Israelis from repeating itself far into the future.