Hapoel Katamon is expecting some 1,500 fans for the first game of the season. 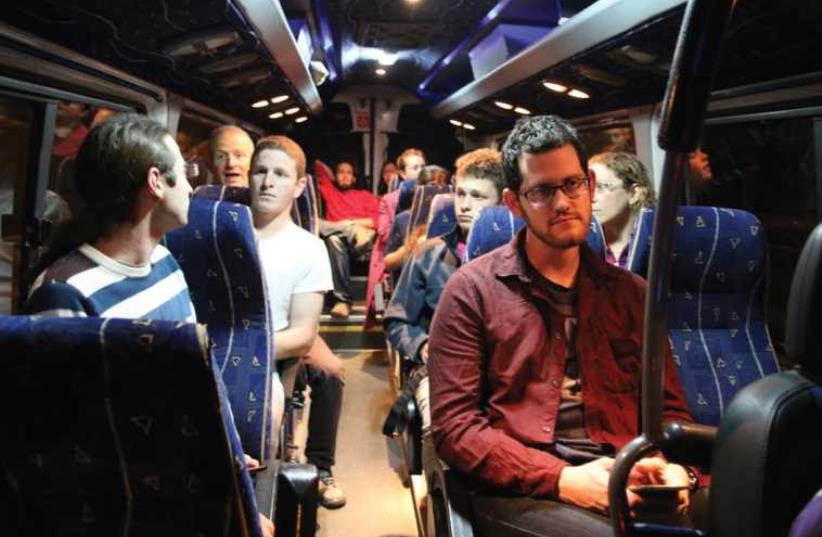 Shabus
(photo credit: MULI GOLDBERG)
Advertisement
The Shabus transport service that operates in Jerusalem on Shabbat has teamed up with local soccer team Hapoel Katamon to help fans get to and from the stadium on Friday night.Shabus, which began operations in May this year, is a cooperative venture authorized by the Economy Ministry the and provides transportation for Jerusalemites wishing to travel around the city on Friday night.Public transportation on Shabbat is not available in most cities as part of the “status quo” agreement reached in 1947 between then prime minister David Ben-Gurion and the ultra-Orthodox Agudat Yisrael movement.That agreement addressed the religious community’s concerns about the status of religion in the future state.Hapoel Katamon, which plays in Israel’s second tier National League, is playing its first match of the new season this Friday at 4:30 p.m. against Maccabi Herzliya at its home ground of Teddy Stadium. Although in the summer Friday matches begin before Shabbat comes in, the game will end at approximately 6:30, after public transportation has ceased. In the winter, when Shabbat starts earlier, Shabus plans to operate both to and from Teddy Stadium.People wishing to ride to and from the stadium with Shabus are able to sign up before each game on the organization’s website.Fans who hear of the service only at the match will be able to travel on one of the service’s mini-buses on payment of the annual NIS 50 membership fee.“Anyone who loves football but cannot get to the games can now come and enjoy a different sporting culture,” said Yaron Dvik, chairman of the board of directors of Hapoel Katamon, a fan-owned club founded in 2007 after it split from Hapoel Jerusalem.“At Hapoel Katamon we are working to create an experience that promotes equality, coexistence and cooperation, so we are calling on all our supporters to sign up to this new travel service.”The club is expecting some 1,500 fans for the first game of the season.Shabus is run by the Cooperative Transportation Association of Jerusalem, founded by several Jerusalemites, including Dr. Laura Wharton, head of the Meretz Party in the Jerusalem City Council and leader of the municipal opposition.Wharton said that Jerusalem residents are thirsty for cultural and recreational activities at the weekend and that the Shabus service is glad to be able to help Hapoel Katamon fans get to the games.“There is no reason to feel locked up at home on the weekend, and we invite the public to join us, to support us and take advantage of the service,” she said.Only members of the Shabus cooperative may ride on the minibuses, since picking up unassociated commuters waiting at a stop would be considered public transportation.That would require a permit from the Transportation Ministry, which cannot legally authorize public transport on Shabbat because of the status quo agreement.Those wishing to use the service therefore need to subscribe to it by paying an annual fee of NIS 50. Each ride costs approximately NIS 12, but payment is by monthly bill rather than cash. The cost of the rides is not fixed and can end up costing less than NIS 12 if usage of the service is high.The service’s minibuses have tablet computers located at the front of the vehicle on which commuters enter their personal identification number.The Shabus minibuses start operating from 6 on Friday evening until 4 on Saturday morning, and pass by designated stops every hour and a half. The company hopes to increase the frequency to once an hour.The main route starts from Neveh Yaakov and Pisgat Ze’ev in northern Jerusalem, travels through the city center, and goes on to Talpiot, Kiryat Hayovel and Beit Hakerem before running in the opposite direction.Two new routes linking nearby Mevaseret Zion and Ma’aleh Adumim have recently been added.The central route has also been recently adjusted to pass the new Yes Planet multiscreen cinema complex on Hebron Road – open on Shabbat – and the Lev Smadar single- screen cinema in the German Colony.The venture has approximately 1,000 members and hopes to expand in the future to provide a service during Saturday as well as Friday nights.Wharton says that only major thoroughfares were chosen for the Shabus routes and that the they avoid religious areas in order to take into consideration religious sensitivities.“There is a huge population in Jerusalem, about 25 percent of the city’s residents – together with tourists – that enjoy Shabbat not by going to synagogue but by going out for dinner, visiting their families, and [taking part in] other activities such as soccer matches,” the Meretz head said.She said that the Shabus operation is sensitive to the religious population of the city, but added, “I would hope and expect that religious people would want others to celebrate Shabbat as a matter of choice and not by force or coercion,” adding that “someone stuck at home because he has no transportation will not become more religious.”