Braunstein says he has always kept his musical options open, across all kinds of cultural spheres and genres.

By BARRY DAVIS
GUY BRAUSTEIN: When I was a kid I listened to everything and anything. I had, and still have, an insatiable appetite for every type of music.
(photo credit: BOAZ ARAD)
Advertisement

For a serious internationally-acclaimed classical musician Guy Braunstein comes across as a funky character. The 50-year-old violinist and conductor has been a fixture on the Israeli classical music scene for over two decades, with a lengthy sojourn in Germany with the prized Berlin Philharmonic Orchestra slotted in en route.

Now, he is back here and revving up for a soloist slot with the Israel Camerata Orchestra Jerusalem (ICOJ) later this month, when Ziv Cojocaru conducts the orchestra in the Violin Virtuoso program, styled as “an evening of virtuoso pieces for violin and orchestra.”

Braunstein will be front and center for Mozart’s “Violin Concerto No. 5,” with the rest of the program taking in Prokofiev’s Overture on Jewish themes, and his “Symphony No. 1,” two works by Tchaikovsky – “Pas de dux” from Swan Lake, and Lensky’s aria from the Eugene Onegin opera – and “Havanaise” by Camille Saint-Saëns. The three-part series begins at Tel Aviv Museum on April 30 (9 p.m.), followed on the morrow with a concert at the Elma Arts Center in Zichron Yaakov (8 p.m.), and closing at the YMCA in Jerusalem on May 2, at 8 p.m.

Braunstein who, among other events, is a regular at the Voice of Music Festival, which takes place annually in the Galilee, says he takes something on an all-encompassing approach to his profession. That, he notes, helped him get through the toughest times of the pandemic. “Other than the first lockdown, from March-June 2020, I was quite happy,” he chuckles. “I worked like a dog. I was lucky compared with other musicians. Maybe that’s because I am sort of a jack of all trades. I play, conduct, write and do other things.”

He says he has basically picked up where he left off, before the world became more insular and has learned to adjust. “I am working just as frequently as before corona,” he says, “although I have to adapt and improvise quite a lot.” 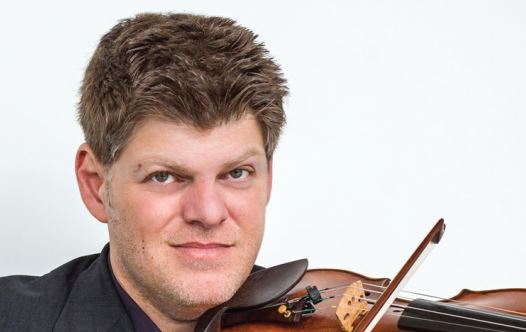 He started making music on violin at the age of 7. He says that was just a matter of going with the local flow. “All the kids in the neighborhood played some instrument, so I just went with it.” Braunstein, however, took it more seriously than the rest. “Most of the kids stopped playing at some stage, and got on with their lives. I am still stuck with this,” he laughs. Happily stuck one may add.

He showed promise right from the start and soon came under the priceless tutelage of Haim Taub, one of the country’s foremost violinists and educators who served as concertmaster of the Israel Philharmonic Orchestra for 21 years. Braunstein cites him as the most influential figure in his musical life. It has been an enduring profitable liaison for Braunstein. “I started studying with him when I was 13 and, in practice, I haven’t stopped learning from him to this day. I am 50 now and he is 96. Whenever I visit Israel I go to see him with my violin and he works me really hard!” he adds with a laugh.

THERE WAS another musical father figure in the Braunstein career path. “I must also mention the late [Israel Prize laureate conductor and violinist] Mendi Rodan. He was a mentor for me. He guided me every step of the way. Even after many years as the concertmaster of the Berlin Philharmonic Orchestra, I can’t think of any other conductor who left such a deep impression on me.” He says he takes Taub and Rodan with him onto every stage he graces. “I never stop wondering what they would say, how they would craft a particular musical phrase. And then I go on from there.”

Braunstein says he has always kept his musical options open, across all kinds of cultural spheres and genres. “When I was a kid I listened to everything and anything. I had, and still have, an insatiable appetite for every type of music.”

That is also reflected in his choice of composer du jour. “I have this modular attraction [to different composers]. At some stage it was Prokofiev and then I moved onto Bartok. What is right, in that regard, today may not be true in six months’ time.”

He also spreads his musicianship across a multifarious sweep of contemporary material, from art music through to jazzy numbers and rock and pop. “I play works by [71 year old] Menachem Weisenberg, [61 year old] Oded Zehavi, [late Austrian avant garde composer] György Ligeti – I was friendly with him and got a lot of guidance from him – and [20th century French composer] Henri Dutilleux.” Braunstein also piles in “Ray Charles, Billy Joel, Yoni Rechter, Lennon, McCartney and Mati Caspi,” noting somewhat superfluously, “for me there is absolutely no difference between classical music and popular music.”

He has enjoyed a long love affair with the composition he will front with the ICOJ. “Mozart’s ‘Violin Concerto No. 5’ is a piece I have played more than others over the years.” In contrast with his tendency to switch composer allegiance over time, he says Mozart is a constant in his repertoire. “It is strange, but I have never needed a break from his work in order to refresh. But that applies exclusively to Mozart.” He also confesses to a predilection for the concerto he will be performing here. “Possibly like the ‘Concerto No. 3,’ it is not a concerto. It is an opera!” he enthuses.

Braunstein is delighted to be joining forces again with the ICOJ. “It is the best orchestra around. [Founder, music director and permanent conductor] Avner Biron has created a monster, in the best sense of the word. We have performed quite a lot of repertoire together. I have a lot of wonderful memories and have had a lot of fun [with the orchestra].”

He is also looking forward to a first-time confluence with Cojocaru. “I have never worked with him before but I have heard lots of wonderful things about him from other musicians.”

Braunstein is a little bemused by the concert moniker, which he clearly is not taking personally.” It really doesn’t make any difference to me – virtuoso or not,” comes the typically down to earth response. “I stand on the stage and tell stories. If the listeners go with my story, nothing else is important.”