The Simon & Garfunkel Story is coming to Israel

The London-based concert-style theater show about the legendary two singers from New York will arrive in Israel at the end of January.

One of Simon and Garfunkel’s best-known numbers is called “The Sound of Silence.” The song originally saw the light of day almost 60 years ago, on the 1964 record Wednesday Morning 3 am. But, despite the numerous breakups of the legendary New York folk-pop-rock duo, and the well-documented intermittent rancor between Paul Simon and Art Garfunkel, their songs continue to accrue radio airtime, and hits on various online platforms.

They also get played, on all sorts of stages across the globe, by many a folk-leaning individual who has learned to strum an acoustic guitar. Our own long-running Jacob’s Ladder Festival often features a professional tribute to the pair, and now we are about to get a taste of what a bunch of gifted young British musicians have to offer in the way of a salute to the musicians who became famous the world over, and managed to disband and reunite several times, long before the incoming performers were even a twinkle in their parents' eyes.

It is a concert-style theater show about the two starry-eyed Jewish lads from Queens, New York who started out in the 1950s, as a high school twosome called Tom & Jerry, and eventually blossomed into one of the most successful pop-rock acts of all time.

With over 100 million in record sales across the decades, Simon and Garfunkel left their mark on the minds and in the hearts of generations of music lovers in the States, Britain and across English-speaking and non-English-speaking domains alike. Some of their vast repertoire, such as “The Boxer” and “Bridge Over Troubled Water,” have achieved anthemic status and, naturally, feature in the British production along with other staples like “Homeward Bound”, “Scarborough Fair” and “Mrs. Robinson.” 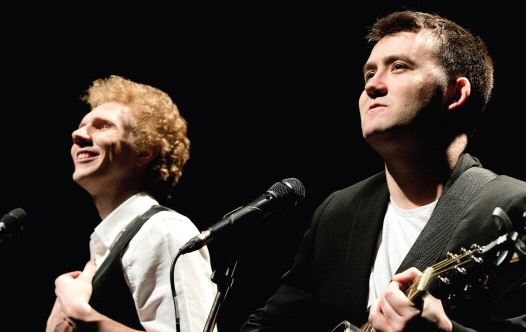 THE LATTER is possibly best known as the standout slot of the soundtrack for The Graduate, the 1967 coming-of-age drama which starred Dustin Hoffman as a well-heeled young man at a dangerous loose end. It also appears on Simon and Garfunkel’s fourth studio album, Bookends, which came out in 1968.

Oliver Cave, who took on the role of choirboy-voiced Garfunkel in the British show a couple of months ago, freely admits to stepping in from the dark. He didn’t exactly grow up listening to Simon and Garfunkel or even watching YouTube clips of their hits. “I didn’t know them at all,” he says, although he did have some visual appreciation of the megastars in question: “I knew what they looked like because the Bookends album cover is really iconic. I’d seen that a few times, but I’d not seen The Graduate. But I did know the line: ‘Hello darkness my old friend’ [which opens ‘The Sound of Silence’].”

Cave explains it was his thespian side that originally drew him to the venture. “I’m an actor so my agent got me an audition for it and I got the role,” he states simply. “I learned some songs for the audition – ‘Bridge Over Troubled Water,’ ‘The Boxer’ and ‘Sound of Silence.’” The first of those, as many probably know, showcases Garfunkel’s singular angelic vocals, with Simon seamlessly dovetailing in the second part of the instantly recognizable and definitively emotive ballad. 25-year-old Cave says he had an appreciation of the fact that this was a double act, and of the way in which the New Yorkers’ voices created an inimitable harmonic synergy: “‘Bridge Over Troubled Water’ was [chosen for the audition] just to show you can sing it. The other two were sort of blend exercises. The key thing about Simon and Garfunkel is that they sound like one person.”

The other half of the double-pronged stage frontispiece, in the West End show, is filled by guitarist-singer William Sharp, with bassist Leon Camfield, guitarist-keyboard player Will Tuckwell and drummer Mat Swales underpinning the frontmen.

Needless to say, Royal Academy of Music training notwithstanding, Cave had to negotiate a pretty steep learning curve. He says his admiration for Simon’s writing skills, and the way he and Garfunkel performed the scores, grew as he became more familiar with the raw material: “‘The Sound of Silence’ opens the show. When I first heard that I thought that’s a bit of a dour start. But, actually, it is one of the best pop, folk, rock – however you want to define it – songs of all time. Actually, it’s a great start,” he laughs.

THE WEST END tribute started life as a purely musical venture but gradually evolved into a multifaceted more theatrical package. The musical content is now augmented by alluring video art and specially designed lighting. The performers also let their audiences in on some of the back stories to the numbers, and the ins and outs of the relationship between the stellar two. Despite the fact that I grew up with sixties and seventies pop and rock Cave, over 40 years my junior, was able to illuminate me about the real-life backdrop to one of the lesser-known Simon and Garfunkel songs in the show playlist. One of my favorites is a short track on the 1970 album Bridge Over Troubled Water called “The Only Living Boy in New York.”

The opening stanza starts with “Tom, get your plane right on time. I know your part’ll go fine. Fly down to Mexico.” For over half a century I had no idea that Simon was writing about a time when Garfunkel took a furlough from their musical line of work to appear in the satirical black comedy movie Catch-22, which was filmed at various locations in Mexico. “It is quite an important song in the narrative,” notes Cave, going on to quote from his onstage between number patter. “Paul wrote this next song, directed to his good friend Art, and as a nod to their earlier days as Tom & Jerry.” One can therefore deduce that Simon was “Jerry” in the pair’s incipient incarnation. “Art was flying off to do a movie so Paul was saying ‘I am the only person here, in New York. I miss my friend.’ That is what the song is about,” Cave explains. You learn something new every day.

Having joined the show almost entirely ignorant of Simon and Garfunkel’s preeminence in the world of rock and roll, and successive generations of artists and fans, Cave is now well and truly on board.

“It is clearly extremely influential. Paul Simon as a songwriter has a long reach in many genres, not just folk. There’s folk, rock, pop. He is a genius songwriter. It is amazing, and he is an amazing guitar player as well so he was able to express what was in his mind. I think that is quite rare.” Having someone of Garfunkel’s vocal prowess by his side didn’t hurt either.

Now we can look forward to a polished, and well-informed, rollout of Simon and Garfunkel classics, songs that are more in the album track – rather than hit number – league, and some enlightening biographical tidbits to boot.

For tickets and more information: *9964 and https://discover.9964.co.il/event/thesimongarfunkelstory/