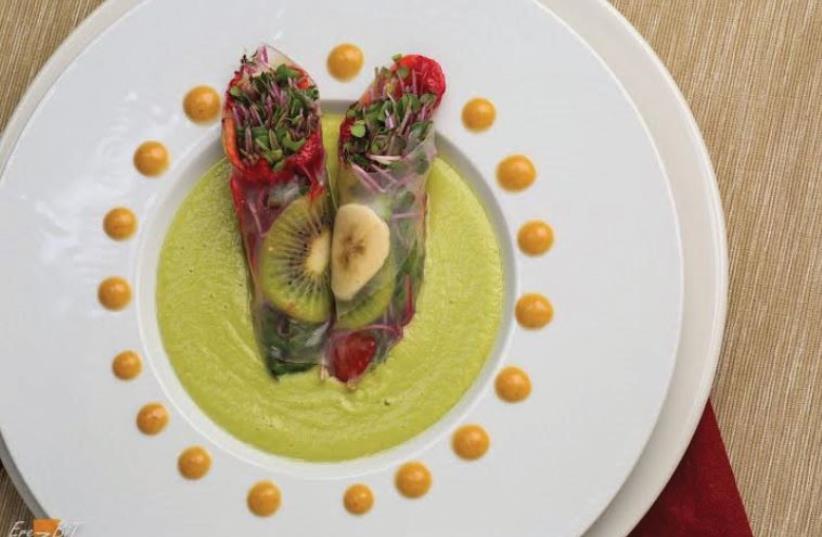 ‘Food isn’t everything, but it is the foundation upon which everything else is built’: Colorful and creative raw cuisine
(photo credit: MITZPE ALUMMOT)
Advertisement
For the second year running, Israelis can get a seat at some of the hottest restaurants in the world – right in the heart of Tel Aviv.Throughout the month of November, American Express will once again be running its Round Tables festival, where the chefs and their staffs from 13 internationally acclaimed restaurants will land in Tel Aviv to take over the kitchens of 13 Israeli eateries for an entire week.Arriving from diverse locations including New Delhi, Paris, Lisbon, New Zealand and Peru, the chefs and their teams will work together with the staff of the host restaurant to prepare a tasting menu for eager diners for a week.Five of the visiting chefs come bearing Michelin stars – considered the highest honor in the culinary world (Michelin does not operate in Israel).Chefs Rafael Centeno of Vigo, Spain, Jose Avillez of Lisbon, Matt Lambert of New York via Australia, Francesco Gasbarro of Geneva via Italy and David Thompson of Bangkok via Australia are all decorated with the international honor.The initiative “advocates cultural, economic and political dialogue through gastronomy,” according to Karvat and Weiss, the PR agency that operates the festival along with restaurateur Yair Bekier. “We are proud to embrace the international chefs with a warm and happy welcome, and introduce them to the multicultural and ethnic culinary heritage of Israel. In return, Israel gets a unique introduction to international excellence and a fruitful dialogue, whose influence transcends borders and time.”The festival will operate over three weeks in November – with four or five restaurants hosting events each week.In the first week, chef Manish Mehrota of New Delhi will bring his Indian cuisine to the Asian fusion restaurant Taizu, led by Yuval Ben-Neriah.The second week sees Peruvian chef Diego Munoz taking over the kitchen of famed Israeli chef Haim Cohen’s Yaffo-Tel Aviv. Finally, in week three, Thorsten Schmidt of Aarhus, Denmark, a pioneer in molecular gastronomy, will join Uri Steinberg in the kitchen of Hotel Montefiore.Only one of the 13 experiences is available to kosher audiences – at Liliyot, where the Spanish Centeno will showcase his unique take on local Galician cuisine.The tasting menus throughout the month cost NIS 279 each (or NIS 239 for American Express customers).More information is available at roundtablestour.com.