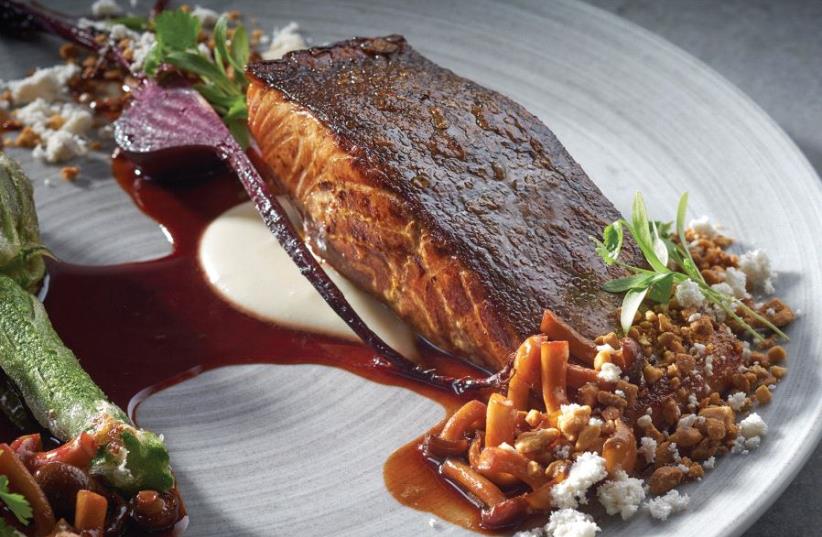 West Side restaurant
(photo credit: PR)
Advertisement
If you’re looking for an exciting and different restaurant in Tel Aviv that is also kosher, look no further than West Side in the Royal Beach Hotel. Presided over by young chefs Omri Cohen and Eitan Mizrachi, it serves wonderful creative food – Israeli Mediterranean with a continental twist. It’s about as far removed from heimishe Jewish cooking that one can get, yet it all has a Yiddishe ta’am (taste).“The concept is to produce new and modern flavors and textures within the limits of kashrut,” says manager Sergei.The hotel, one of the Isrotel chain, was built almost four years ago, which is when the restaurant opened. It was designed by architect Harold Klein, who also created the restaurant’s décor – an open space with all the kitchen activity visible to the diners.Romantic lighting, candles on the glass-topped tables, parquet floor, marble walls, the place is big yet has an intimate quality.As soon as we were shown to our table, our helpful waitress Chen brought a basket of warm salty brioches with some garlic dips, and then went off to order our cocktails. I chose the Green Collection, a ginbased beverage that contained cucumber, basil, dill and ginger beer, with a sprig of rosemary floating on the top.It was very refreshing and deceptively innocent–tasting. After drinking a mere third of it, I had a warm and uninhibited glow which increased with every sip. My companion had a Cosmopolitan – a vodka and orange mixture. (All cocktails NIS 52).Two very large soup plates were brought to the table, covered with lids to keep the soup hot. We were told it was aubergine soup, but it had no taste of the vegetable. However, it was creamy, light brown and very comforting.For starters I chose the ceviche of fish (NIS 68), and my companion the liver pate (NIS 67). Esthetically, I could not fault the ceviche. It was a symphony of green and white, the chopped locus mixed with lemon and herbs and tastefully shaped into oval balls with a garnish of cucumber curls and red onion rings. It was also delicious, very fresh and piquant.The liver pate came with a pear garnish, was creamy yet meaty and was polished off with not a crumb left.We were also offered a large piece of roasted goose liver with beetroot chips, an unusual combination.Having seen geese being force-fed many years ago on an Israeli farm to produce this delicacy, I passed but was assured by my dining companion that it was very good.For the main course, my companion chose the lamb osso bucco, a very large bone full of the tender tasty meat, set in a puree of potatoes with a rich red wine sauce.Being an experienced surgeon, he was able to extract every edible morsel from the bone and pronounced it perfect.My choice was baked grouper (locus) with aubergine cream (NIS 110). This is a very solid white fish with a subtle flavor. I felt it had been cooked a fraction too long, but the side dish of lemony black lentils with diced tomatoes and herbs made up for it.The desserts were prepared by the pastry chef of the hotel, Anat Alon, and were superb.One of the desserts was called Between the Hills and the Rocks (NIS 62). It looked exactly like a pile of boulders in sand, a real work of art.The “sand” was crumble, and the “rocks” were chocolate-covered malabi – an authentic Israeli creation.It tasted as good as it looked. The other dessert we had, called Bubbles, was a bowl of perfectly spherical sorbets of different sizes and flavors and was also beautifully presented (NIS 56).Full marks to the chefs for creativity and to all the staff of the restaurant for a delightful evening.