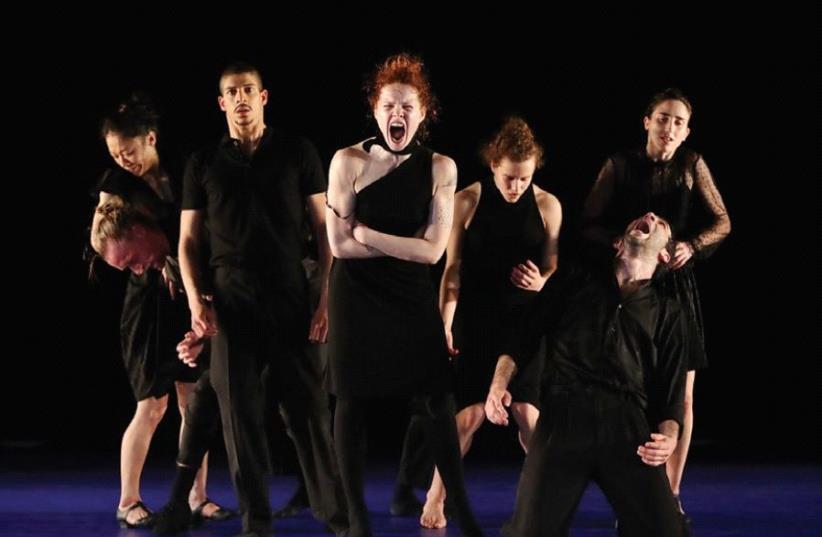 The Batsheva Dance Company
(photo credit: PR)
Advertisement
Don’t let the name of Ohad Naharin’s new piece Venezuela fool you. It is not, in fact, an ode to the South American nation.“It could, of course, connect to the country, but I don’t think it’s about that,” says Eri Nakamura, Batsheva Dance Company member, costume designer of Venezuela and life partner of Naharin.Nakamura, 32, sits cross-legged on a bench on Rothschild Boulevard. Her bike, decked out with a child seat for daughter Noga, seven, is perched beside her. It is early morning, and Tel Aviv is jolting into action around her. It’s overcast, which Nakamura says reminds her of Japan.Nakamura has spent the past two months working around the clock in preparation for the upcoming premiere of Venezuela.“We’ve been rehearsing from 10 a.m. to 8 p.m. every day for two months,” she sighs. “My daughter goes to see friends every day after school, and I’m on the phone every day with babysitters. I’ve taken to sleeping in her room because I don’t get to spend enough time with her during the day.”Nakamura was born and raised in Nagano, Japan. As a young woman, she went to Australia to study at the Australian Ballet School. From Melbourne, she moved to Madrid, where she joined the Victor Ullate Dance Company. Her path continued west to Montreal, where she spent two years with Les Grands Ballet Canadiens. It was in Canada that she met Naharin.“I had never seen his work, had never heard of him before, never heard of the Batsheva Dance Company. I wasn’t interested in dancing in Batsheva at all; I wanted to be a ballerina,” she recounts.But Naharin’s powers of persuasion prevailed, and after several unanswered invitations, Nakamura packed her bags in 2008 and went to Tel Aviv.“My first impression of Israel was ‘hot!’ Around the same time as I joined the company, our personal relationship formed,” she says.Transitioning from pointe shoes to Gaga technique required Nakamura to part ways with her previous training.“I really like ballet,” she says, “but I knew I’d never be happy with myself in ballet. To be a ballerina, you need to be a Barbie.”Being both a dancer and costume designer for this work, her third creative process with Naharin since joining Batsheva, has filled Nakamura’s plate to the brim.“There is a lot of pressure to finish everything on time,” she says.Her work on costumes emerged from a break in her dance career and a deep understanding of Naharin’s vision.“I saw him working with several designers over the years. It always took him time to connect with the designers, to get them to understand what he wanted. I always felt that I knew what he was after. I like clothes, and at one point I was taking a break from dancing for a year. I had nothing else to do in that time, and it was a good time to try out costumes,” she explains.Adding costumes to the mix brought a new level of collaboration between Nakamura and Naharin.“It is actually a lot easier than I had thought. I would never have imagined that I would be good at working with a partner. Somehow, there’s a very good dynamic between us. He gives me room, I give him room. We have a lot of respect for each other,” she says.Being new to design has Nakamura on a steep learning curve.“I don’t have the skills or technical knowledge to design, so I work very closely with the Batsheva sewing workshop. There’s a woman named Chaya who is my partner there. I call her every day with questions,” she says.Since starting out designing, Nakamura has created costumes for Batsheva, as well as independent choreographers. Her sleek, gray button-down shirts can currently be seen in Noa Zuk and Ohad Fishof’s The Burnt Room.For Venezuela, Nakamura immediately connected to the concept of a group.“I had a strong feeling of a religious group. I started to play with ideas, many of which Ohad didn’t like. I made three other costumes around the same concept. One was a rabbit suit, the next had everyone in pink leotards, then there was a very Asian look. Eventually, we got to black costumes. They have a formal feeling, kind of like a funeral or a religious ritual,” she recounts.Hardcore Batsheva fans will note that the company is returning to wearing shoes in this piece, something they haven’t done for a long time.“Ohad knew from the start that he wanted shoes, formal shoes,” says Nakamura. “For the dancers, it’s a challenge. It’s much easier for them to dance barefoot. Finding the right shoe for each dancer was very sensitive; they need to feel comfortable. But seeing it now, I understand how necessary the shoes are, how much they add and how it all makes sense together.”And, of course, Nakamura is one of those dancers, and a very compelling one at that. Since joining Batsheva, Nakamura has slowly and surely come into her own. Though still quiet and gentle in her stage presence, Nakamura has been able to find freedom on stage.“I’m enjoying this creation very much as a dancer. Being a mother changed how I dance, how I think. My happiness is her,” she says. “I feel more relaxed now; I think I got free from myself. Of course, Ohad gives me a lot of happiness. I have learned so much from him. This secure feeling helps a lot in how I dance. I have gained this basic feeling that I can be myself and explore from there. I have found my confidence within myself, and I’m more able to put what I feel and think into the work. I feel freer to improvise and to try things. The company dancers are such fun people. We have a great time in the studio.”The Batsheva Dance Company will perform ‘Venezuela’ on May 12, 13, 15, 16, 18, 19 and 20 at the Suzanne Dellal Center in Tel Aviv. For more information, visit www.batsheva.co.il.