Break out the matza, sit back and enjoy these films. 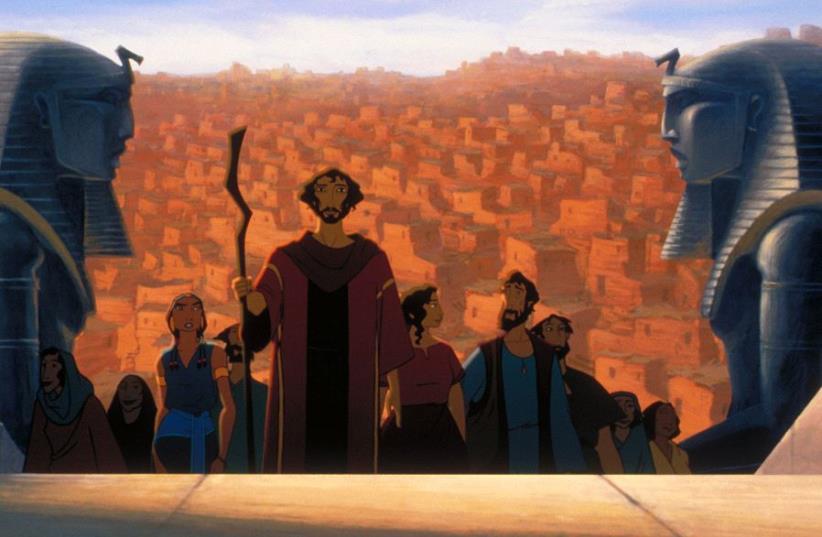 The Prince of Egypt
(photo credit: screenshot)
Advertisement
If you’re home from work or school for the week of Passover you might be looking for entertainment. Or maybe you’ve got a house full of family and want to put something on TV to keep everyone happy. Here are five classic films to consider watching, all with themes and story lines that will make you think about the holiday.‘The Ten Commandments’ If you expected this to be first on the list, well then, I’m nothing if not predictable. But no Passover movie list would be complete without the 1956 epic – all 220 minutes of it. With the commanding Charlton Heston as Moses (and the voice of God), the film recounts the biblical tale of Moses and his transformation from Egyptian prince to the leader of the Jews. Sure, Cecil B. DeMille took a little artistic license with the original story for the movie, but that will give you even more to talk about with members of your family.‘The Prince of Egypt’An animated splitting of the Red Sea? Check. A voice cast that includes Val Kilmer, Ralph Fiennes, Michelle Pfeiffer, Sandra Bullock, Patrick Stewart, Steve Martin and Helen Mirren? Also check. Catchy songs with Hebrew verses? But of course. This 1998 Dreamworks musical tells the story of Passover in a dynamic and captivating way. If your children slept through the Seder, this is a great way to have them catch up.‘Twelve Years a Slave’ Despite the biblical commandment, it can be difficult to really imagine life as a slave in Egypt thousands of years ago. So perhaps this 2013 film on the real-life story of Solmon Northup – a free black man who was kidnapped and sold into slavery for 12 years before being released – can be more relatable.Northup knew a life of freedom in New York before being subject to harsh labor, abuse and humiliation on a plantation in Louisiana. Viewers can only wince as Northup’s pain and degredation are displayed in heartbreakingly brutal detail. The film won three Oscars, including Best Picture.‘Shawshank Redemption’ It’s not the most obviously Passover- themed film here, but this cinematic classic has a lot to offer for deeper meaning. The movie follows the lives of prisoners in a state penitentiary and their struggles to retain both humanity and hope. Themes include the multi-faceted exploration of freedom in both its physical and spiritual manifestations – and the struggle to adapt to life outside prison walls after being incarcerated for so long behind them.Shawshank is regularly included in lists of the best films of all time.‘Exodus’ True, the Exodus in this 1960 film isn’t the biblical one, rather the modern- day immigration of European Jews and the creation of the State of Israel.But the symbolism which led the Holocaust survivors to name their ship “Exodus” and for Leon Uris to use the title for his bestselling book (and basis for the film) should not be lost on anyone.The journey from a detainee camp to Palestine, where young Jews fought to establish a state against the odds, is one that easily resonates. If those aren’t enough reasons, it features a 35-yearold Paul Newman. Need I say more?