From beet juice to sprout flatbreads and coconut oil, there’s a market for everything 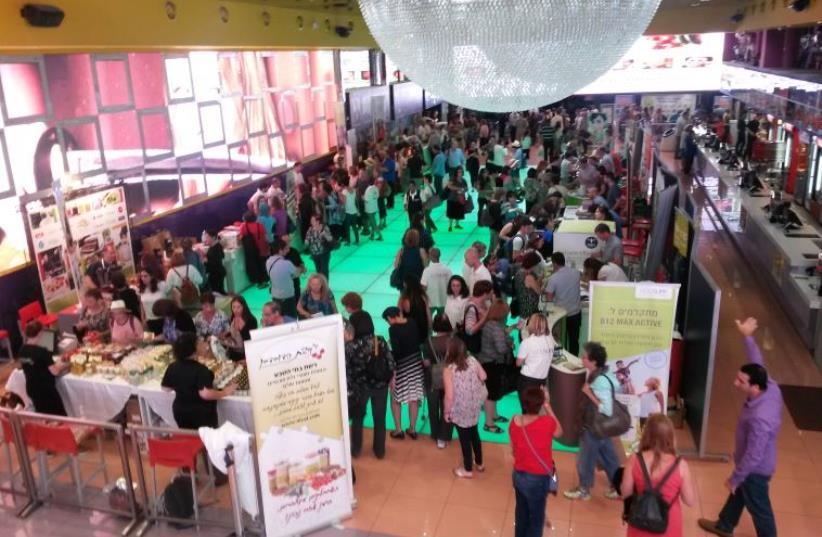 Jerusalem's cinema city healthy eating conference
(photo credit: AMY SPIRO)
Advertisement
The lines for popcorn and extra-large sodas were almost nonexistent at Jerusalem’s Cinema City movie theater on Wednesday afternoon.Instead, the close to 2,000 people who packed into the space were there to attend the Eating Healthy conference, billed as the largest nutrition and health symposium in the country.Among this crowd, grabbing a cup of Ben & Jerry’s before heading in to watch The Nice Guys would be severely frowned upon.The event has taken place for the past seven years in Givatayim. This is the first year it was held in Jerusalem, said Eatwell CEO Ben Yakir, co-organizer of the event.For 12 hours throughout the day, doctors, nutritionists, dietitians and chefs held classes and workshops (each costing NIS 40) on a variety of topics – and with a variety of messages.One of the most popular talks was given by Paula Rosenberg, a naturopath and expert in natural medicine, on “The Recipe for Creating a Healthy Kitchen.” Rosenberg, ironically, has become most famous of late for her role as co-host of the reality TV competition show Bake Off Israel – a program noted for its copious amounts of sugar and chocolate.Hundreds hung on to Rosenberg’s every word, including that you shouldn’t be comparing yourself to Gal Gadot and Bar Refaeli, and that it’s OK to treat yourself – and your kids – to junk once in a while, as long as the base of your diet is healthy.But just next door, Galit Shalgi, a health and nutrition expert, told a crowd of almost exclusively women that they should banish white sugar – “a poison” – from their homes entirely.Shalgi, leading a workshop on making “healthy sweets,” showed off a variety of recipes made up of ingredients including coconut sugar, coconut oil, ground flax seeds and maple syrup. Only a glancing mention was made, however, of the extraordinary price of some of these ingredients: 500 gr. of coconut sugar is about NIS 45 (compared to NIS 2 for regular sugar); 500 gr. of coconut oil is NIS 50 (compared to NIS 20 for butter); and 500 gr. of pure maple syrup tops NIS 60.None of that seemed to matter much to the 50 or so people scribbling down the amounts for each recipe, despite being promised they’d receive them via email.A significant majority of those in attendance at the conference – sponsored by Eatwell, Focus publishers and the Jerusalem Municipality – were women, many of whom came toting babies, and at least 50 percent were religious, ranging from those in colorful head scarves and hats marking them as national-religious to those in wigs, favored by the ultra-Orthodox community.Outside the lectures, a variety of companies and sellers hawked their wares – from healthy cookbooks to pots for cooking without any oil, a range of hemp oils (for those who didn’t buy the pots) and a wide variety of juice and juicers (depending on your level of commitment to the craft). Samples also abounded, such as seaweed powder, stir-fried (oil-free) vegetables, a surprisingly tasty beet juice and a largely inedible sprout flatbread.I’d never been happier to see free chocolate waiting for me when I got to the office.