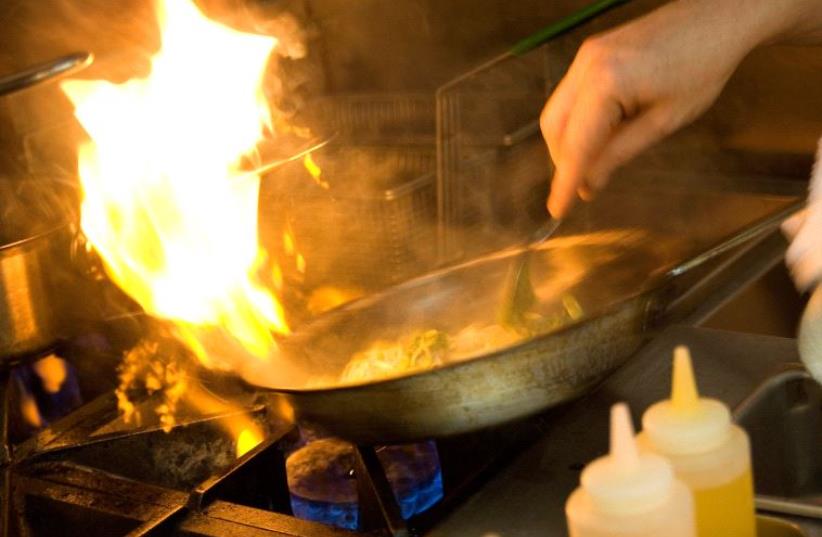 Chef cooking with a flaming pan (illustrative)
(photo credit: ING IMAGE/ASAP)
Advertisement
She’s one of the most celebrated Jewish cookbook authors in the world.And now Joan Nathan has entered the hall of fame – of sorts.Nathan’s seminal 1994 Jewish Cooking in America was awarded the title of “Culinary Classic” by the International Association of Culinary Professionals at their annual conference this week. The honor, which was also given to four other cookbooks, celebrates works “that have significantly altered the way we think about food and contributed to the field of culinary literature,” according to IACP.Writing on Facebook, Nathan said she was “excited and honored” by the award.“It feels great that people are still appreciating this work after almost 20 years!” she said.When Jewish Cooking in America first came out, it won IACP Best Cookbook of the Year as well as the James Beard Award for Best Food of the Americas Cookbook.Also this year, Molly Yeh’s Molly on the Range: Recipes and Stories from an Unlikely Life on the Farm won the Judge’s Choice for best cookbook.Yeh’s debut book explores her half-Jewish, half-Chinese culinary roots, including heavy influence from her travels in Israel.Uri Scheft’s Breaking Breads: A New World of Israel Baking was nominated in two IACP categories – Culinary Travel and Food Photography & Styling, but lost out in both cases.